There is a curious relationship between the Grand National and grey horses. Since the first running of the greatest race in steeple chasing, only three greys have won it. Yet when race day rolls around you’ll find a whole host of bettors decide to have a wager on any greys in the race, in spite of the fact that the numbers suggest that they won’t do well in the running. Why?

As you might expect, a grey horse is one that has a grey coat. They tend to have black skin and dark eyes, but the hair that covers their body is grey, often intermingled with white and other colours. Interestingly, greys can be born any colour with the white hairs appearing not long after birth.

Not all horses will grey at the same rate, so some will do quicker than others. They also tend to be more common in some breeds over others. Those of Arabian descent often see more greys than of other breeds, as do thoroughbreds. They are discernible from white horses on account of the fact that they have black skin, rather than white, though both types can have the same hair colour.

Many people believe that a horse’s coat colour can be used as a predictor for its personality, with chestnut horses seen as fiery, for example. Quite how much truth there is in that hasn’t ever really been proven, though there have been numerous scientific studies carried out in the hope of proving things one way or another.

There is similarly a belief that silver or grey horses can be difficult to handle and sometimes nervous. As a result, a study was carried out in Iceland to look into the matter, hoping to find out whether the horses looked at would react differently to fear reactors than horses with a different colour. The study looked at 27 different horses, 9 greys, 9 black or brown and 9 chestnut coloured, matching their sire as often as possible.

The study seemed to find that silver horses were more cautious when approaching new situations than horses of other colours. This may well be because horses with that colouring tend to also suffer from congenital ocular anomalies and visual impairment, meaning that the reaction might be as much to do with their overall health as anything specifically to do with the colour of their hairs.

Greys And The National

Between the first running of the Grand National and the 2019 outing of the world’s most famous steeplechase, just three greys have won the race. They were as follows:

The interesting thing about the most recent winner on that list is that the trainer, Paul Nicholls, hadn’t won the Grand National prior to the victory despite having been Champion Trainer numerous times and having a Cheltenham Gold Cup win to his name. He won three more Gold Cups after, almost as if winning with a grey unleashed something in him.

The Lamb is the most successful grey horses in National history, winning it not once but twice. Of course, the fact that he did so before the turn of the 20th century means that not an awful lot is known about him!

Interestingly, he was also remarkably young when he won it for the first time, doing so as a 6-year-old. Given that most winners of the modern era are at least 9, you can see why he wasn’t expected to do well before the race began!

What adds even more allure to the story of The Lamb is the fact that paintings from the time of his second win in 1871 show a black horse, suggesting that he had shed his grey coat. Does that mean that really he only won it once as a grey? That’s for you to decide!

Fred Rimell enjoyed four wins as a Grand National trainer, but his most noteworthy is arguably Nicolas Silver for the simple fact that he was a grey. Bought from Ireland for 2,500 Guineas, Rimell believed that he’d do well on the firmer ground found in England than on the Emerald isle. So it proved when Charles Vaughan rode him to victory at 28/1 in 1961.

As an intriguing aside, the owner of Nicolas Silver married the granddaughter of one of the owners of The Lamb in the years after Silver’s National success. Weird things happen in horse racing.

Neptune Collonges is the horse that it’s easiest to tell you the most about because he won the race most recently, crossing the finish line first in 2012. The record books will only ever show that he won the race, but a closer look will reveal that he did so by just a nose from Sunnyhillboy in second. It was a close-run thing but a massive difference in the battle of champion trainers that year, allowing Paul Nicholls to finish ahead of Nicky Henderson.

Neil Young once wrote that it was better to burn out than to fade away, which is exactly what Neptune Collonges did. Having won the Grand National the horse never ran again. Who can blame his owners for making that decision, given that not only ended the wait for a grey winner but also became the first horse since the world famous Red Rum to win with a weight of 11 stone and 6 pounds or more.

How Grey Horses Have Done Over The Years

Between 2010 and 2018 24 greys took part in the Grand National. Here’s a look at each of them, including their Starting Price and their finishing position in the race: 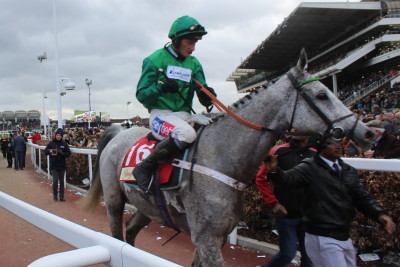 When it comes to figuring out why greys don’t tend to do that well in the Grand National it’s not overly difficult to simply do the maths. In all but 2015, 2016 and 2018 of the races run between 2010 and 2018 a maximum field of 40 horses took part in the showpiece event.

Of those 356 competitors, just 24 were greys. That’s 6.7% of all competing horses being grey in nature.

In other words, it’s mathematically far less likely that a grey horse will win the race than one of a different colour. It’s little wonder that there have been so few to cross the finish line first since the race was first run in 1839!

Given their general lack of success on the field, it’s difficult to figure out why greys often prove to be so popular with punters come race day. Is just the mythology that surrounds them? Or is that people need to find a reason to back a horse if they’re not big on racing and don’t know how to consider the likes of form and history?

It’s often said about the Grand National that it’s the race that people who don’t tend to gamble will have a little flutter on. For that reason, people look for all sorts of reasons to select one horse over another. Liverpool supporters would jump on one named ‘Anfield Annie’, for example, whilst others will choose one that will be wearing silks made of their favourite colour.

With that in mind, it’s not exactly shocking that people will turn to a horse that is as good as guaranteed to stand out from the crowd before placing their wager. You might not see it succeed, but you’ll be able to follow a grey around the course until it either falls or crosses the finish line, which might explain why bettors love to lump on a grey when one is entered into the race.