How Many Horse Races Are There A Year?

In the United Kingdom and Ireland, horse racing is one of the most popular sports for people to attend, watch and bet on. Whether you’re a fan of flat racing and therefore delight in events such as Ascot, or you enjoy jump racing and gear up for the likes of the Cheltenham Festival, there is a real chance that you’re going to be thrilled by the excitement of what takes place on tracks up and down the country. As a result, you might well want to know exactly how many opportunities to be engaged with racing there are.

It is not an easy question to answer. There are a good number of racecourses around the UK and over in Ireland that host meetings throughout the year. Given the sheer popularity of the sport, it is hardly surprising that there is very much the demand to see racing take place at every available opportunity. With about 1,000 meetings taking place each year, that allows for around 10,000 horse races to be run. Little wonder, then, that horse racing is considered to be one of the richest sports industries, giving away millions in prize money.

What The BHA Says

The British Horseracing Authority has extremely useful statistics when it comes to how many races are run under its jurisdiction each year. Because the BHA is the governing body for horse racing in the UK, it is their statistics that we’ll look at first. It is important to note that the BHA differs from Horse Racing Ireland, with the latter being in charge of races in Ireland and therefore looked at separately. We are looking specifically at British races here, breaking things down by year between 2016 and 2020, as you will soon be able to see.

Here we’ll initially look at how many races took place over jumps and how many were on the flat, with jump racing broken down into hurdle races and chases. Flat racing, meanwhile, takes place either on the turf or on an all-weather track in the United Kingdom, so we’ll offer that information too. We need to bear in mind that this is over a course of five years, as opposed to how many races take place each year:

Over the five-year period in question, there were 48,695 races in total run on tracks that came under the auspices of the British Horseracing Authority. That works out as an average of 9,739 per year. Thankfully, though, we don’t need to go off the average, with the BHA informing us of exactly how many races took place each year, as well as whether they were over jumps or on the flat. Here’s how it breaks down per year:

You can see from the table above that it was 2020 that ended up bringing the average down. You might remember that global events resulted in racing being cancelled or held behind-closed-doors for that year, which might help to explain why around two and a half thousand races were cut from the BHA’s schedule. It is fair to assume that about 10,000 races take place every year under the banner of the British Horseracing Authority, with the largest number coming in 2018 when 10,406 races took place.

How Many Fixtures Were The Races Split Over?

Over the course of five years, 6,832 fixtures were staged. That allowed for the 48,695 races that we’ve just read about to take place, but what was the breakdown per discipline?

It is interesting that, over the course of five years, nearly double the amount of flat racing fixtures were staged when compared to jump racing. That matches with our information on how many flat races took place per year in comparison to jump races. Once again the BHA allows us to break things down further, looking at the number of fixtures per year between 2016 and 2020:

You can see that about 400 fixtures were lost from the calendar in 2020, with around 250 of them being flat fixtures and fewer than 200 of them being jump fixtures. There were also 1,077 fixtures that were abandoned over the five years in question, plus 17 partial abandonments. Of those, here’s how many were held in the afternoon, how many at twilight and how many in the evening:

Here’s that broken down per year:

One thing to note is that afternoon fixtures suffered as a whole in 2020, but didn’t suffer as a percentage of the total number of fixtures that took place. Twilight fixtures had already started to die out in 2019 and remained at zero for 2020, with evening races suffering the most in terms of the overall percentage of fixtures.

Where Do Races Take Place?

Given the prevalence of racecourses such as Aintree, Newcastle and Doncaster, you’d be forgiven for thinking that more races took place in the north than anywhere else. Once again, though, the British Horseracing Authority’s detailed statistics allow us to discover whether that is true or not. We can even offer you a breakdown according to whether it’s a jump racing fixture or flat racing fixture over the period of five years that we’ve been looking at:

The first thing that jumps out is that the South gets far more race fixtures than the North and the Midlands. It is also interesting that the Midlands gets more jump racing than either the North or the South, which is doubly surprising when you consider that Gloucestershire, the county that hosts the Cheltenham Festival, is classed as being the South-West rather than the middle of the country. The split of race fixtures by region is as follows:

What Type Of Races Are They? 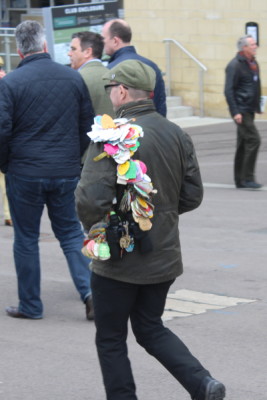 Whilst the list is far from exhaustive, it is worth having a think about the types of races that you can expect to be able to see in the United Kingdom each year. In flat racing, the most prestigious races are put into the category of Group 1, of which there are 36 noteworthy events worth mentioning. That list includes the likes of the Queen Elizabeth II Stakes, the Fillies’ Mile and Britain’s five Classics.

When it comes to Group 2 races, British flat racing promises around 49 such races over the course of the year. That isn’t the biggest section of races, however. There are approximately 75 Group 3 races that take place over the 365 days in the British horse racing calendar. There are 36 handicap races, which don’t fit into either category, and about 135 Listed races that take place.

In jump racing, the categories work slightly differently. There are about 40 Grade 1 National Hunt events run each year, with the Cheltenham Gold Cup being the standout of them all. Indeed, the Cheltenham Festival plays host to many of the biggest Grade 1 jumps, such as the Stayers’ Hurdle, the Ryanair Chase and the Queen Mother Champion Chase. That also includes some flat races that are run under National Hunt conditions.

There are 71 National Hunt Grade 2 races at the time of writing, with the likes of the Prestige Novices’ Hurdle, the Cleeve Hurdle and the Scottish Champion hurdle all fitting into that category. That compares favourably to the Grade 3 category, of which there are about 42 races run during the year under National Hunt conditions. That does include the Grand National, however, as well as the Scottish and Welsh Grand Nationals. There are also another 50 or so important National Hunt races that haven’t yet been graded.

Where The Races Take Place?

There are some well-known racecourses around the United Kingdom that host many of the biggest races. The likes of Aintree, Cheltenham and Ascot will not be unfamiliar names to even those with only a passing interesting in horse racing. Other names such as Cartmel, Haydock Park and Kempton Park might tickle something in the recesses of the mind but not exactly spring forth when trying to name racecourses that you know well.

Here’s a list of the racecourses in the United Kingdom that offer racing at the time of writing:

Obviously some of those are flat racing courses and some of them are home to jump racing, whilst some others, such as Chepstow, Doncaster and Ffos Las will host both racing disciplines depending on the time of year. Reading the list like that, it is easier to understand how quite so many races take place each year in Britain, though some of the courses play host to more of them than others.

Ireland is, understandably, a smaller country than the entire United Kingdom. As a result, there are fewer racecourses and fewer races in total hosted on the emerald isle than in the UK. In fact, there are about 26 major racecourses in Ireland, which host in excess of 350 meetings and about 2,000 races every year. Though Ireland itself is smaller, there are more racecourses per head of population than in any other country. That, perhaps more than anything else, helps to explain why racing is so popular in Ireland.

Here are the 26 racecourses recognised by Horse Racing Ireland at the time of writing:

With The Curragh, Fairyhouse, Leopardstown, Naas, Navan, Punchestown and Wexford,  in the province of Leinster, this part of Ireland boasts more top-class racecourses than any of the others. The Punchestown Festival is the biggest even in Irish National Hunt racing, taking place each April and thought of by many as being the Irish equivalent to the Cheltenham Festival.

At the time of writing, there are 13 Group 1 flat races that take place in Ireland each year. That is the same number of races as are run in Group 2, with Group 3 hosting more than both of those put together, with 46 Group 3 events hosted in a year. Even that shrinks in comparison to the 55 Listed flat races that Ireland hosts on a yearly basis.

In National Hunt racing meanwhile, Ireland plays host to 37 Grade 1 races, including the likes of the Mares Novice Hurdle Championship Final, the Hatton’s Grace Hurdle and the Ladbrokes Champion Chase. There are 30 Grade 2 races held in Ireland each year, whilst Grade 3 accounts for 40 National Hunt races that take place during the course of the year in Ireland. There are 17 other noteworthy National Hunt events, such as the Grand National, which are at least worthy of a mention.