If you are looking at the path which horses have taken to get to the Grand National, then there are few horses that have a longer one than Ben Nevis. He was a British-bred racehorse, but one that spent the first part of his career in the USA, where he completely dominated, too good for the opposition over there.

He was sent back across to England by his owners, where he joined the Tim Forster yard, and his main aim was to win the Grand National. Things didn’t go to plan in 1979, but when he returned to the race in 1980, despite tough underfoot conditions, he was a thoroughly impressive winner.

Foaled in 1968, when winning the Grand National, Ben Nevis became the third American-owned winner of the race. For those looking to delve further into the history of Ben Nevis, he raced under the name ‘Ben Nevis II’ in America and was registered as simply ‘Ben Nevis’ in the UK.

Winner Of The 1980 Grand National 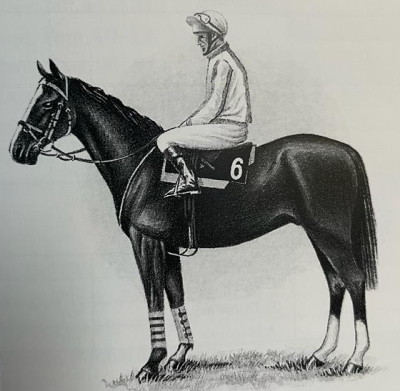 The 1980 Grand National will certainly go down as being one of the toughest tests in recent years. Thirty horses went to post, a few put off by the conditions on race week, which were dreadful, to say the least. Of those, just four managed to finish to race, and it was Ben Nevis that came home in front at the huge price of 40/1.

His big SP was down to a couple of factors. Firstly, he disappointed in the 1979 Grand National, where he fell, and after being remounted, he was pulled up a fence later. There was also a big question mark over whether he would be able to handle conditions or not, he had never really been tested in such conditions.

The fact is, the race was in the bag a long way from home for Ben Nevis, such was his lead and the lack of challengers left remaining. As the horses jumped Becher’s Brook for the final time, his nearest challenger, Delmoss, crashed out of the race, and from there, it was simply a case of staying on his feet and getting to the finishing line.

That is exactly what he did, and Ben Nevis went on to record a winning distance of 20 lengths ahead of the second-placed Rough And Tumble. The only other two horses to finish were The Pilgarlic, who finished third and Royal Stuart, who was fourth and last to come home. It was a real procession, with the horses coming home at long intervals, but fair play to the brave four who were able to get home while the others struggled to do so.

In the aftermath of the race, it was brought to light that Ben Nevis had actually been struggling in the build up to the race. He had a cough, which prevented him from being at full strength. Trainer Tim Forster said that the only reason he ran the horse in the race was because he didn’t want to disappoint his owners, who had already travelled over from America to watch him run.

It turns out that the decision to run was fully justified, anything the horse had, he’d beaten by the time he went to run and was able to come out on top.

The decision to send this horse across from America in 1979 was fully justified. He wasn’t able to have the same amount of success in Europe as he did in the USA, but when it came to his biggest target, he was able to win that one.

Prior to heading back over to the UK in a bid to win the Grand National, Ben Nevis had spent his racing career in the USA. He was bred and bought in the UK by American owners, and they had great success in their homeland with him.

The horse won the Maryland Hunt Cup on two occasions, in 1977 and 1978. He also won back-to-back renewals of the Maryland Grand National, another big race in his career.

He ran a total of eight races and won them all, which is impressive enough. On top of that, though, he was also able to break two different course records, showing that he was running at a very high level.

It was in 1979 when he was sent back over to the UK to continue his career with Tim Forster. After winning the Grand National, he was retired, but two further American accolades showed just how well-liked and talented he was.

In 1995, Ben Nevis died of colic, and a place of burial was needed. He was eventually buried at the side of the 13th fence on the Grand National course in Butler, Maryland, the scene of some of his biggest days.

Later, in 2009, the horse was inducted into the USA horse racing hall of fame for being such a high-quality animal who ran in the United States.

There are not too many horses that can span across two continents with their big race wins, but Ben Nevis is one of those. He wasn’t as prolific in Europe as he was in the USA, and actually, his only European win was the Grand National success in 1980.

This was the one and only big race win in the UK, the rest came in the USA during his time earlier in his career. The Maryland Hunt Cup was the biggest success of his in the USA, and not only did he win this race once, but he won it in both 1977 and 1978.

Finally, he also won the Maryland Grand National and did this back to back, too, these round off his big race wins around the world.

Five in total, four in the USA during a big period of dominance, and the biggest of his career, the Aintree Grand National in 1980, round off what was an excellent horse racing career, if a little different, for Ben Nevis.