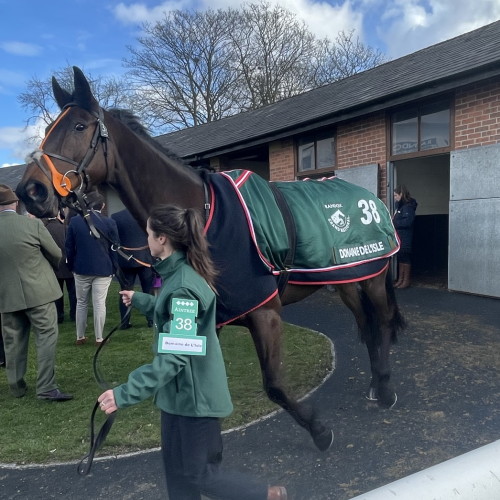 Domaine De L’Isle began his racing career in France under the care of Emmanuel Clayeux, where he ran over both hurdles and fences. After running for a couple of years, he was bought and sent to the UK, where Sean Curran would train him.

Foaled in 2013, the horse has spent most of his UK career over the larger chase, including running over the big Grand National fences at Aintree. A multiple winner, and runner in some of the biggest handicaps on the calendar, he loves tough conditions and long distances.

As mentioned, Domaine De L’Isle began his racing career in France, where he ran for a couple of years. This started over hurdles, his first run was in November 2017, and he finished his French career by running in a big handicap chase, where he was fourth.

The horse recorded two wins during his ten runs in France, both of those came over the bigger obstacles.

In the UK, he ran over hurdles first up, finishing third, but was quickly sent chasing and after finishing sixth in November 2019, when the ground was tough through the winter months, he won three races in a row. The best of these was the final one. This was a victory by just a neck, but it came in a valuable class 2 handicap chase at Ascot.

He returned to Ascot for his final run of the season, a respectable fifth-placed effort in a listed handicap chase. From this moment, his mark was up in the 140s, and that meant he could run in many of the top handicaps on the calendar, which is exactly what Domaine De L’Isle did moving forward.

Domaine De L’Isle has been unable to add any truly big race wins to his CV. The big handicap chase he won at Ascot is a career highlight, while other solid wins at Kempton and Cheltenham have further added money to the pot over the years.

We have seen this horse run well in big races, and one of his best runs was a good fourth in the Becher Chase at Aintree in December 2021, a race that is run using the big Grand National fences. The Eidur Chase at Newcastle and bet365 Gold Cup at Sandown are just two of the other big races we’ve seen this horse in, though success so far has eluded him.