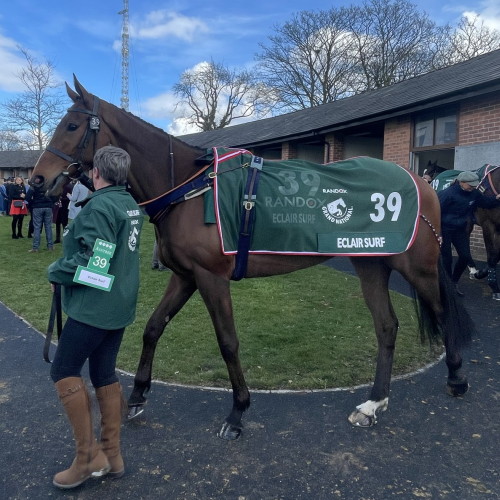 As an eight-year-old just getting into his prime as a national hunt horse, Éclair Surf went to the 2022 Grand National with a strong chance of running well after a great build-up. Sadly though, he fell at the third fence in that race, and unfortunately, he was fatally injured.

Foaled in 2014, the horse was showing himself to be a strong staying chaser who could compete at a high level before the fall happened. Given that he was just eight at the time, trainer Emma Lavelle would have been hoping for more years of fun with this runner, which would no doubt have included more shots at the Grand National.

We only saw Éclair Surf run a total of 13 times in his career, and the first two of those came in Irish point-to-point races. Third, on debut, he then went out and won in grand style on his second run, recording a winning distance of 30 lengths that day.

It was at this point that he was sent over to the UK, teamed up with Emma Lavelle and began his career under rules. On debut in the UK, he went in a novice hurdle at Exeter first time up and won by three and a half lengths.

The yard were clearly impressed with him, both in the race and at home, because he was sent straight into Grade One company after that. He went to the Challow Novices’ Hurdle at Newbury, where he fell when fading out of contention, not entirely up to that level but still showing he had the makings of being a good horse.

A small break followed before returning to novice hurdle company, but in his final novice hurdle, he was only able to finish fourth, which was slightly disappointing. However, a move up to chasing followed in the next season, and this is where the horse really began to show his true colours on the course and where he got everyone excited.

Moving up in distance and running on soft ground brought out the best in him over fences, the horse won a couple of handicap chase races to start moving up the ladder, and it was only a matter of time before he started running in more valuable races.

The biggest win of Éclair Surf’s career came at Warwick in the Classic Chase. This race is seen as one of the better Grand National trials, ran over three miles and five furlongs in January at a time when all the Grand National contenders are looking for a prep run.

Éclair Surf didn’t just go to the race and win, he went and romped home, recording a winning distance of 13 lengths. Given the competitive nature of this race, it was a real statement from the horse, and the handicapper certainly took note, putting him up 10lb for the win.

After this, he did run one more time before the Grand National, and it was another very solid effort, he finished second in the Eidur Chase at Newcastle, another big Grand National trial race.

This all led him to be odds of 14/1 for the 2022 Grand National, he had really impressed and given his age, there was a chance that even more could come from him in the future. However, the race would also be his ending, sadly, and it happened very early, at just the third fence.

Unfortunately, we will never know what would have happened with Éclair Surf that day or afterwards, but he was certainly on his way to being a potential Grand National winner.