A three-time runner in the race and one-time winner, Grittar was excellent in 1982 when he landed the Grand National. He had previously won the Foxhunters double in 1981, winning the Cheltenham Foxhunters before going to Aintree and landing their version of the race, which uses the Grand National fences, which gave him experience on the course.

It is fair to say that Grittar was the ideal Grand National runner, he had stamina in abundance, was a great jumper and had experience before going to the race. He won on his first outing in the Grand National, it was also his jockey’s first run and his trainer’s second runner, but you certainly couldn’t tell that from the race, they looked like experienced professionals.

Being a hunter chaser, and being ridden by a 48-year-old jockey, is not the kind of profile you look for in a horse when trying to find the Grand National winner. That didn’t stop the public from liking him, though, he was 7/1 favourite when he won the race.

Winner Of The 1982 Grand National 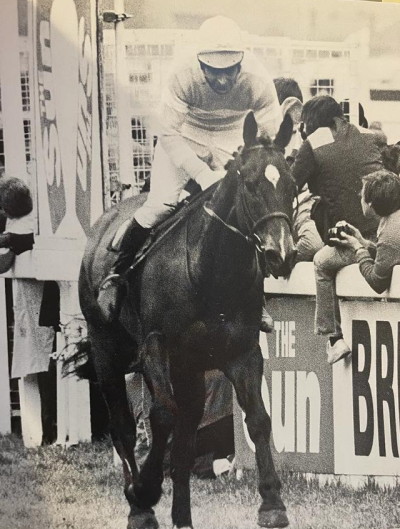 The race was wild, with plenty of fallers, ten at the first fence and then a further ten before the runners had reached the ninth fence, over half of the field gone. The horse was running in the race for the first time, and jockey Dick Saunders was also a first-timer, despite his advancing years. The pair stayed clear of trouble, and while those around them were struggling, they were able to get into a nice rhythm, jump well, and put themselves in a great position.

Towards the end of the race, no horse was going better than Grittar, he looked full of running and was continuing to jump really well, there was only going to be one winner, barring an accident. He jumped the last and went up the run-in, going into the final furling, Grittar was already being eased down, he knew he’d won and, remarkably, looked like a fresh horse who could have gone around the circuit again.

The official winning distance recorded was 15 lengths, this was a hugely impressive victory and an excellent outcome for punters, who had backed Grittar well both in the build-up to the race and on the morning of the race. He was sent off as the 7/1 favourite despite being a hunter chaser and having a 48-year-old amateur jockey on his back.

The story of the fallers in this race, plus the big news around the jockey, Dick Saunders, should not take away just what an exceptional performance this was from Grittar, he was right in his prime and showed what a talented individual he really was.

Jockey Saunders became the oldest rider to win the Grand National aged 48, and given the struggles that national hunt jockeys face in modern times, it is highly unlikely that anyone will ever break that record. After being on top of the racing world, Saunders decided it was best for him to go out when at the top, so he announced his retirement from the sport.

A year later, Grittar would return to Aintree and came fifth behind Corbiere, running well before tiring due to the large weight he had to carry on his back. He would run in the race for one more time in 1984 but could only manage to finish 10th in the contest and would retire afterwards.

Three runs and one win for Grittar, and a very impressive win at that. He dominated the race, jumped well, stayed on strongly, and managed to avoid trouble with fallers hitting the deck around him. He couldn’t follow up in the future, but the nature of his 1982 Grand National win certainly makes it one of the stand-out performances over the years.

The Grand National win in 1982 was certainly the biggest of Grittar’s career, but he did have success elsewhere. However, just how big that success was, depends on how you view racing.

His other two big wins came in the hunter chase sphere, which is what he was prior to going for the Grand National. He won the Cheltenham Foxhunters Chase in 1981, which is not the biggest race at the festival, but of course, there aren’t too many horses who get to win at the Cheltenham Festival, so it is a big race win for that reason alone.

A few weeks after that Cheltenham win, Grittar went to Aintree and won the Aintree Foxhunters Chase, which is another race at a big festival, and for that reason, it has to be considered a big race. That race was key to his Grand National win, too, because he had experience of the fences and of the course that the Grand National is on.

Some will argue that these two races don’t have huge significance because they are hunter chase races, but the fact is that Grittar won at two major racing festivals in 1981 and followed that up with a Grand National win in 1982.