If you ask many people about their biggest Grand National memory, many would go back to the 1997 race. However, despite it being such a big event and the race that many remember, not everyone would be able to tell you that Lord Gyllene was the winner that year.

The 1997 Grand National was the one postponed because of a bomb threat on the course. The race was moved to the Monday when it was run in front of a small crowd, but still more than 20,000, as the area of Liverpool wanted to show that this great race deserved to go on.

Foaled on November 10, 1988, Lord Gyllene produced a stunning performance to win the race in 1997, recording a winning distance of 25 lengths. With a low weight on his back, he jumped the field silly, moving clear every time anything tried to challenge him.

The 1997 race would be his only attempt at the Grand National, winning perhaps the most famous National of them all.

Winner Of The 1997 Grand National 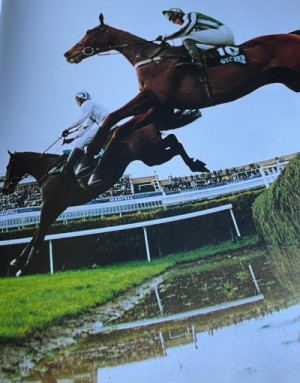 Given everything else that happened on both the Saturday and Monday of the race in 1997, it is easy to forget the story of Lord Gyllene during the build-up to the race. This was a horse that was fancied strongly by many, and in the week leading up to the contest, he was antepost favourite with the bookmakers.

Money for other runners, combined with weakness in this horse for whatever reason, took him out to almost double his antepost price on the day, he returned the winner with an SP of 14/1, which will certainly have surprised many.

In terms of the actual race itself, the main part, a lot of credit needs to go to Lord Gyllene for the way he went around Aintree. His jumping was superb, he really stretched out the field when in command and had plenty left in reserve to keep well clear of anything that fancied trying to get close. The winning distance was 25 lengths, a huge margin back, while the other placed runners who took second, third and fourth were all separated by less than five lengths in total, so they did have a close race.

With just ten stone on his back, jockey Tony Dobbin must have had the ride of his life on this runner, every fence was jumped very well, some foot perfect, while he knew there was plenty left under him, if he needed it, which he didn’t.

The race on Monday wasn’t a typical Grand National. Security was tight, so horses and those with them had to spend additional time getting into the racecourse and had to arrive early. A crowd of just over 20,000 helped the horses, as they were not in front of a big atmosphere like we have seen at Aintree in other years.

This was a different challenge, and that is before we talk about the fact that horses were prepared for Saturday, put through their morning paces, got ready for the race and then were taken away rather than running. Then they had to come back two days later, go through the preparations again, and then finally run the 1997 Grand National. Not only did Lord Gyllene do things brilliantly when he won, but he had far tougher pre-race conditions to do it in and deserves a lot of credit for that alone.

Unfortunately, everything that happened probably led to Lord Gyllene not being remembered as well as he should have. When people think back to 1997, they automatically think about the bomb scare or the fact that the race was run on a Monday.

Let’s not forget the winner, though, a true Grand National hero, who had it tough on the day but managed to come away from the field and score a 25-length victory in his only attempt at the race.

Lord Gyllene did not have a very long racing career in the UK and ran just a total of 13 times, winning four of them. All of those races came over fences, where he was a complete natural and showed very good jumping ability throughout his career.

He would get his first win in the UK and move up the racing ladder in his second season.

Prior to that, although not big races, he recorded a hat trick of victories that deserves mentioning. He began on a handicap mark of 125 when he won the first and was raised to 148 by the time he had won all three. The margins were 16 lengths, 15 lengths and eight lengths, with all three looking like competitive races beforehand.

A winner of just one big race, but an excellent winner, in a year that people won’t forget.