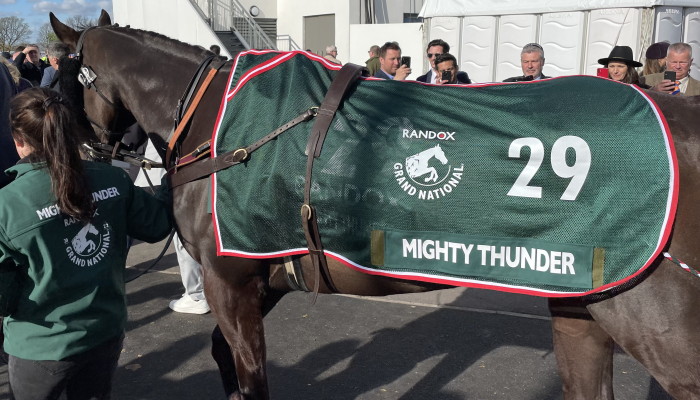 A horse that has proven himself as a stayer and jumper by winning one of the other Grand National events in horse racing, the Scottish Grand National at Ayr. That was a big day for the yard, as Lucinda Russell is based in Scotland, and they know what it takes to win a Grand National at Aintree, too, after training One For Arthur to do exactly that back in 2017.

Foaled in 2013, Mighty Thunder has progressed through the ranks, winning a flat race before winning over hurdles, then going over fences, which was always going to be the long-term plan with this horse, and winning in that sphere.

Winner Of The Scottish Grand National 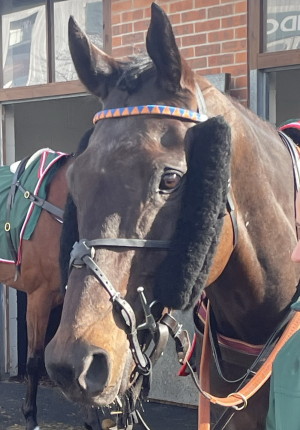 At the start of 2021, Mighty Thunder showed us all that he was a top-class stayer who needed an extreme trip. He had a run of three races, which began with an Edinburgh National win at Musselburgh. He followed that up with an excellent second in the Midlands National at Uttoxeter, losing out by a length.

Then the third run gave this horse the biggest day of his career, and that was a win in the Scottish Grand National at Ayr. He won by three-quarters of a length, finishing in front of Dingo Dollar, another strong stayer, and really cemented himself as one of the best-staying handicap chasers in training.

It was all he needed to prove that the Aintree Grand National was a race that he could genuinely target and have a chance of winning. A year later, in April 2022, he would go to Aintree for his first crack at the Grand National but was pulled up at the 24th fence. He didn’t get to the race in the best of form, however. His two previous runs saw him pulled up in the Welsh National and the Edinburgh National.

June 2017 was the first time we saw Mighty Thunder on the racetrack, and despite this being a national hunt flat race over just two miles, he was able to win his first start at Perth. Given a small break, he was sent to Cheltenham in October for a much stronger race and wasn’t disgraced when finishing sixth of 14 runners.

Hurdling was next, but things didn’t go too well at the start. He would run nine times over hurdles before getting a win under his belt, which came in December 2018 at Kelso in a low-level maiden hurdle.

A couple of handicap hurdle wins followed the season after, but this was always a horse that looked as though he would improve again when sent chasing. That’s exactly what he saw as Mighty Thunder went two out of two on his first two chasing starts, winning the first one by a huge 41 lengths.

That was the moment we saw the horse finally start moving in the right direction.

We’ve already mentioned the biggest moment of Mighty Thunder’s career, and his two National wins are the two big races he has under his belt. The Edinburgh National came first, the smallest of these two wins, but a big one still, and he destroyed the field that day at Musselburgh, winning what is usually a competitive race by 20 lengths.

The Ayr Scottish Grand National victory that came in April 2021 stands out as being the best, though. It is regarded as one of the best-staying handicaps on the calendar, full of good horses, but it was Mighty Thunder who managed to stay on best of them all and grab the win by three-quarters of a length.