Papillon ran twice in the Grand National during his career and was lucky enough to finish in the frame on both occasions. His first race was a winner, which came in 2000 when he won under jockey Ruby Walsh, who was at the time having his first ride in the race.

The second was a fourth-place finish in a dramatic contest that many believe shouldn’t have actually taken place and a race in which Ruby Walsh actually remounted Papillon to continue the race and get home.

Foaled on June 5th, 1991, Papillon was under the trainer Ted Walsh during his racing career, the father of jockey Ruby Walsh. In the build-up to Papillon’s Grand National win, there was a chance he would never get into the race after his owner said she would not run him, as she didn’t like the race and the risk it involved.

Eventually, Ted Walsh managed to convince Betty Moran to let her horse run in the race, and not too long after that, they were in the Aintree winners enclosure with a Grand National winner.

Winner Of The 2000 Grand National 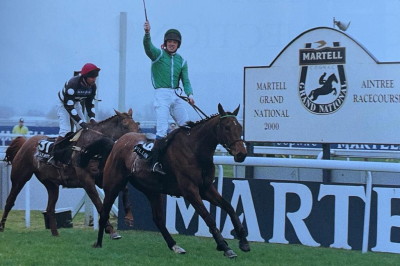 He returned victorious with an SP of 10/1, showing just how much money was put on him during the day. There was no real push from people such as newspaper tipsters, so the assumption is that this all began with stable confidence and word getting out that the horse was fancied.

A fresh-faced 20-year-old Ruby Walsh was in the saddle, riding for his father and taking his first mount in the race. Walsh had already proved his abilities in the saddle, so this wasn’t really seen as a risk, despite being a first-timer.

Dark Stranger was the market leader ahead of Papillon, in part due to the money for this mount based on Tony McCoy having the ride, but he fell at the third fence. In the end, just one horse was able to stick with Papillon and give him a race, and that was Mely Moss. The pair gave us a great finish, with Papillon coming out on top by one and a quarter lengths.

A year later, Papillon would be back for more. This time around, it wasn’t to be, he had a lot more weight on his back, and conditions were very different to the year before, with heavy rain leaving the ground officially classed as heavy.

Just four runners finished the race, two of those, including Papillon, were remounted by jockeys. Ruby Walsh saw his mount brought down at the 19th fence and thought he was out of the race. However, Walsh noticed that many of the other runners were out of the race, and there was a chance to win some prize money by getting back on.

He did and continued to ride Papillon around Aintree, taking it steady, as the other remaining contenders did too, given the conditions. He never got anywhere near being back in contention, Walsh didn’t even try to do that, but the horse did manage to complete and finish fourth in the race, which gave him another placed finish and £25,000 in prize money for doing so.

Papillon didn’t start his carer in the usual way, beginning at two miles and building from there. His first four races were over between two and a half miles and three miles, so it is clear from the off that the Ted Walsh yard had him down as a strong stayer.

He had just two runs over hurdles to kickstart things, too, before going straight over fences, so they also knew that jumping was his game. From the very early stages, the two parts of his makeup that were going to eventually take him to Grand National glory were clearly identified and acted upon by the yard.

He was a regular winner in the early part of his career and ran in some good races. The best of his early wins came in a Cheltenham handicap, but as he went on through his career, the horse moved up to run in better company, including graded races on many occasions.

During the main part of his career, Papillon picked up a couple of good wins before his Grand National success. He won a listed handicap chase at Leopardstown, and then, two starts later, won a Grade Two chase at Naas. From then on, the horse struggled a bit but was reverted to hurdles for a period to protect his handicap mark over fences, with an eye on the Grand National.

That came to life, the horse was allowed to run in the race, and he went on to win it, giving him the biggest win of his career. On his first run back after the Grand National win, he won a listed chase at Leopardstown, but that would turn out to be the final win of his career.

Papillon provided his team with some strong days out, but the Grand National success in 2000 was undoubtedly the biggest of those.