Winner of the 1996 Grand National, Rough Quest will go down as one of the most popular winners during the 90s. He was well fancied by punters and put up some excellent displays before winning the Grand National to really put himself in the spotlight.

Everything went to plan at Aintree, despite a lengthy stewards enquiry into the race afterwards, though Rough Quest was allowed to keep the contest. This was just the second time in Grand National history that a stewards enquiry had taken place.

Foaled on January 1st, 1986, Rough Quest would run in the Grand National on two occasions, with a second run in 1998 coming two years after his win. He was pulled up towards the end of the race that day, failing to repeat his earlier success.

Winner Of The 1996 Grand National 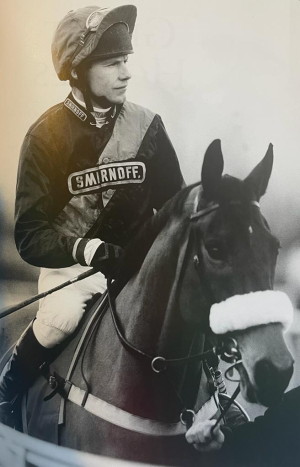 The 1996 Grand National saw a winning favourite, and not only that but a very popular, well-backed one. Rough Quest had showcased his talent before coming into the race. He’d won the Racing Post Chase at Kempton in February to advertise his claims and then backed that up with an excellent second in the Cheltenham Gold Cup, which came just 16 days before the Grand National.

Those two runs firmly put him into the mix, and he was supported by punters from double-figure odds down to being the 7/1 favourite when the race went off. Fans who were cheering on the favourite were excited at the start of the second circuit, where jockey Mick Fitzgerald moved his mount into contention, and from there, he kept creeping through the field, jumping well and looking like a possible winner.

At the final fence, Rough Quest was in second but looking very dangerous, and after that jump, he powered up the hill to get past Encore Un Peu to grab the win by one and a quarter lengths. There was interference in the closing stages, and this is where the controversy began. A stewards enquiry was called afterwards, which took a long time to sort out.

Pictures shown to those at home watching on TV clearly showed that Rough Quest caused interference to Encore Un Peu, and the latter named had to pull back and stop his run to avoid a collision. However, the opposing side was that Rough Quest was finishing much quicker and had all the momentum.

Eventually, the result stood, Rough Quest was named the winner of the race, much to the delight of connections and, of course, the many punters who had backed the favourite. However, there was a lot of talk afterwards about the interference, and it was compared to many other races, where results were changed. The feeling was that the stewards did not want to be involved in switching a race at such a high level, with the racing world watching on, so decided to keep things the same.

Rough Quest was undoubtedly a benefactor of being at the foot of the weights for this race, which is bizarre considering his strong form beforehand. His second in the Gold Cup came after the race weights were published, which enabled him to carry just 10st 7lb.

Two years later, the horse returned to run in the Grand National again and was fancied to go well. With more weight on his back, though, and a couple of years older, he was unable to repeat and was pulled up with two fences to go.

Rough Quest had two different trainers before Terry Casey finally got his hands on what would be his Grand National winner. First of all, Michael Nevin trained the horse in Ireland, running in two national hunt flat races and failing to win.

Then he was sent to Tim Etherington, where he ran in the UK. He ran once over hurdles and fell, but despite that, was sent straight over the bigger obstacles afterwards, a strange move, but one that certainly paid dividends.

He won a couple of novice races and finished fourth in a Grade 1 at the Cheltenham Festival to really announce himself. He spent the following season running in top-quality handicap chase races and was carving out a name for himself in that sphere.

As he grew with age, Rough Quest found himself running in better races and competing against some of the best horses of his time.

In April 1995, he won a Grade 2 handicap chase at the Punchestown Festival, the first big race win of his career. A year later was when he hit the top of his game. The first victory he recorded in 1996 was the Racing Post Chase, a Grade 3 handicap chase at Kempton and seen as a strong race for pointers towards the Grand National.

His next run wasn’t a win, but it certainly deserves mentioning. Just 18 days after the Racing Post Chase win, he ran in the Cheltenham Gold Cup, the premier national hunt steeplechase for the best horses in racing.

Rough Quest finished in second place, four lengths behind Imperial Call, who won the race well. Most Grand National contenders would have skipped this race, but not Rough Quest, who simply loved racing.

16 days later came the biggest day of his career. Rough Quest won the Grand National in slightly controversial style, but certainly with the backing of many punters and industry experts, given how well he ran in the Gold Cup.

After the big win, he won two minor events and was never able to get back into the winner’s enclosure at the top level. Further highlights included a second placed finish in the King George at Kempton, but when returning to the Gold Cup, he fell and was pulled up on his return to the Grand National.

Despite that, Rough Quest will go down as a Grand National winner, a tough horse who loved to run and did so regularly, and one that had a little controversy around him when landing the big one.