Winner of the Grand National in 1995, Royal Athlete surprised us all by taking the victory, winning the race at an SP of 40/1, with few punters latching onto his chances. One of six runners from his yard (a record at the time), he clearly wasn’t fancied by them either but went on to win the race by an impressive seven lengths.

Foaled in 1983, Royal Athlete was 12 when he won the Grand National and only went on to run once after the race, which was a couple of weeks later in the Scottish Grand National.

Royal Athlete was seen as a runner that spoilt the party in many ways in a race that was all about one horse. Don’t let that take anything away from the manner of his victory, though, coming away from the field in grand style, and doing it all towards the end of his career, when he was a 12-year-old.

Winner Of The 1995 Grand National 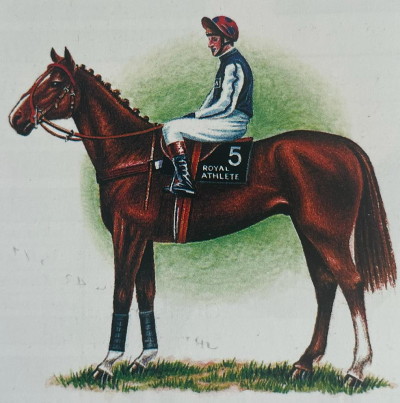 Ahead of the 1995 Grand National, there was only one horse people were talking about. Master Oats was the runner, despite his fall in the 1994 race, he was strongly fancied after showing some excellent form since that. He won the Welsh Grand National in December and followed that up with a Cheltenham Gold Cup win in March. He was aiming to be the first horse to win the Gold Cup and Grand National in the same year for 61 years, which grabbed the attention of many.

Although handicapped with top weight, in many ways, that worked in the favour of Master Oats because it pushed many of the runners out of the handicap. He was well backed after his Gold Cup win, all the way through until the day of the Grand National. He was returned with an SP of 5/1, very short for a race of this nature, but no surprise given how much public support was behind this runner.

He took up the running on the second circuit, disputing the lead with Royal Athlete from then until the home turn. At this point, though, the weight began to tell, as did the fact he’d won the Gold Cup just a couple of weeks earlier. He jumped the final fence in second but would fade down the field on the run-in, eventually finishing 7th.

Royal Athlete, who took up the race with Master Oats during the second circuit, was able to keep running and stayed on stronger than anything behind him. He took the final fence as leader of the race, and there was no turning back, eventually kicking clear to win by seven lengths.

In second was Party Politics, a horse who won the Grand National in 1992, he came close to bagging another but couldn’t reel back the leader on this occasion.

The victory was a first in the race for jockey Jason Titley, who was actually having his first ride in the national. Trainer of the horse was Jenny Pitman, she’d already won the Grand National before, back in 1983 with Corbiere, and saw Esha Ness cross the line first in 1993, in the race that never was, due to a false start.

Most horses win the Grand National at the peak of their career, and more often than not, it’s because they need to be. Royal Athlete was a little different, though, he won it on his way out, as a 12-year-old, and on his penultimate start.

Royal Athlete began life in novice hurdle races, winning a couple of them before being thrown in at the deep end, into a Grade 2 contest at Ascot in December 1989. He won that race, shocking plenty at 33/1, but it was to set up his career and bring him into the spotlight at a young age.

A month later, he went chasing and won two minor events quickly before landing another Grade 2 contest, again at Ascot, but this time over the bigger obstacles. He’d arrived towards the top of racing. A Grade 2 novice chase win at Aintree in April 1990 rounded off that year, and as a novice, Royal Athlete had won three graded races, an impressive start indeed.

After those three Grade 2 novice wins, getting back in the winner’s enclosure was not easy for Royal Athlete. Changes in race distance, switching from hurdles to fences, and many other things were tried, but nothing worked.

Between his novice days and his penultimate race in the Grand National, the horse won just twice in a handicap hurdle and chase.

However, the biggest and best day eventually came, with his Grand National win. Not a huge player, according to the betting, but one that succeeded on the day and was able to put together a huge performance to win the big one.