Not only that, but everyone involved was having their first attempt at winning the race, horse, jockey, trainer and owner. Foaled in 1969, Rubstic was a 10-year-old when he won at Aintree and would race at 11 and 12 in the race before retirement.

Known for being a great jumper, the 1980 Grand National saw Rubstic fall at the 15th fence. Remarkably, this was recorded as the only time he fell in a race, such was the quality of his jumping. Of course, the Aintree fences are unforgiving, and it took these big fences to bring him off his feet.

Winner Of The 1979 Grand National 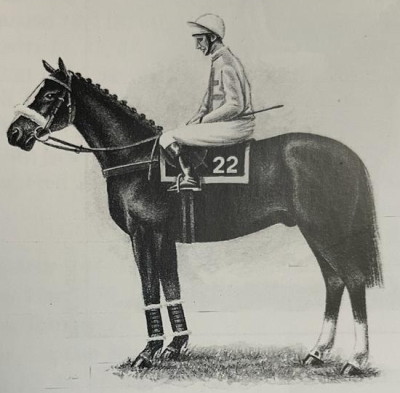 A combination of good to soft ground and loose horses causing problems, in particular at The Chair at the end of the first circuit, led to just seven runners from the 34 starters being able to finish this race.

Talk ahead of the race was all about Alverton. He had won the Cheltenham Gold Cup just weeks before the Grand National and was here to try and complete a historic double. Unfortunately, he fell in the race, and to make things worse, he died on the track after breaking his neck.

25/1 shot Rubstic was the one to take advantage, coming home to win the Grand National by two lengths from Zongalero, who was second at 20/1. Going into the closing stages, these two, plus Rough And Tumble, were all in with a chance of winning the race, though the latter named was fading after a hard race.

Zongalero just wasn’t able to stay on as strongly as Rubstic, and the Scottish runner managed to pull a little clear and go past the line first. The horse, jockey Maurice Barnes, trainer John Leadbetter and owner John Douglas all had the pleasure of tasting Grand National success at the first attempt.

A year later, when an 11-year-old, Rubstic, was back for more. He was again ridden by Barnes, still trained by Leadbetter, but this time around, he wasn’t able to complete the course, falling at fence 15.

This was the one and only time in his career that the horse would fall in a race, showing what a quality jumper he was throughout his career. There was hope he could go well on this day, and the betting public were certainly behind him, sending Rubstic off at just 8/1.

His final Grand National run came a year later, in 1981, when Rubstic was 12 and coming towards the end of his career. He managed to stay on his feet this time, no surprise given his jumping record, and ran respectably well without really getting involved.

Rubstick would finish seventh, and this would be the last time we saw him run in the Grand National, ending with three runs, two completions and one win on his record.

The Grand National was Rubstic’s main target in his career, as a strong staying chaser who could jump really well. On top of this, it was the only big race he would go on to win in 1979, though let’s not forget he made history while doing this, becoming the first Grand National winner from Scotland.