One of the biggest names in Grand National history, West Tip made a huge mark on the race over the years. He ran in the contest six times, won once, finished second once, and then placed a further twice, just once, he failed to complete the course, which was his first attempt and a race where he will go down as being incredibly unlucky.

Foaled in 1977, this horse will forever be associated with the Grand National, even though he ran in multiple other good races over his career, which included a Cheltenham Festival win. Trained by Michael Oliver, he delivered his trainer the only Grand National winner of his career and was responsible for six of the nine runners he had in the race.

Richard Dunwoody rode him to victory and did so on five of the six races he ran in, with Peter Hobbs riding him in his final Grand National, which came in 1990. 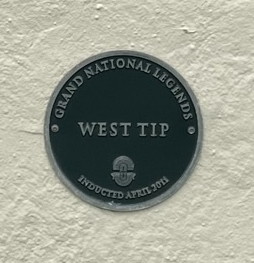 Without a doubt, West Tip is both one of the most popular Grand National horses of all time and also one of the most talented and tough horses. He ran in the race a total of six times, which came in six consecutive years. That in itself is an achievement, just getting into the race and being there fit and well for six years in a row is a big deal.

His achievements in those runs, the consistency he showed, and the ability to win a race all just add on top to further enhance his reputation and the achievement he delivered. When horses win a Grand National, they often struggle due to a rise in the weights, and whether it is other big races or coming back for another Grand National, success is made even harder.

West Tip fell in his first Grand National in 1985 but then won in 1986, so he was a winner on his second run in the race. From then on, his task was made much tougher due to his rating. However, he went on, and in 1987 and 1988, he was able to finish fourth, placing in the contest due to the number of runners in it.

Then in 1989, he was able to go even better and finish second in the contest, despite his advancing years. His final run in the race came in 1990, where he would only manage to finish 10th, but by the time this race took place, he was a 13-year-old and at the very end of his racing career.

Winning this race is special, being able to place three times is special, and running in six consecutive Grand National races is perhaps the most special achievement of all three. West Tip completed the lot, and rightfully so, is a Grand National legend who will be fondly remembered forever.

Winner Of The 1986 Grand National

The 1986 Grand National was the second time we had seen West Tip in the race, and this was all about redemption for what happened in 1985. In that race, West Tip was travelling very nicely when coming to Becher’s Brook for the second time. There was a group of horses that were in contention to win the race, he was part of them and probably travelling the best from all of those, certainly no worse than anything else left in the race.

Unfortunately, though, he would fall, which would put an end to his challenge. Many people fancied him that day, and they jumped on him again in 1986. When returning to the race, West Tip was heavily backed and was sent off as the 15/2 second favourite, and he didn’t disappoint his fans.

The race thinned out towards the end, and we were left with a group of eight runners going across Melling Road, all of them having some chance of winning. At this point, though, nothing was travelling anywhere near as good as West Tip, who was standing out in the pack and beginning to mount his challenge.

He moved through into second place, which is where he would be when the horses came to the final fence. The big outsider Young Driver, a 66/1 chance, was the horse in the lead, beginning to tire but staying on nicely, while West Tip was still going well behind him.

After the last, Richard Dunwoody pushed West Tip forward, and he went to join Young Driver before going past him to take the lead. At this point, we all expected West Tip to drive clear of his rival and win the race by a double-figure margin, but that did not happen. Instead, he kept going well and remained in full control but was unable to really pull clear, and the second probably deserves a lot of credit for that.

West Tip was the winner, though, by two lengths, which doesn’t sound like much, but it certainly looked comfortable on the day, and he would gain redemption for what happened 12 months prior when he fell at Becher’s Brook.

An unlucky loser, followed by winning the race after being well backed, just two years in, and West Tip was doing all he could to become a race legend, and over the next four years, he would go on to further enhance that.

In 1987 and 1988, West Tip would return to the Grand National, but the additional weight on his back made his task much tougher than when he won the race in 1986. He still ran incredibly well, though, to finish fourth on both occasions, giving him one victory and two placed efforts in the race enough to cement his position as a Grand National hero, regardless of what came next.

However, what came next was a near miss and a second placed finish that would have blown the roof off Aintree racecourse had it been a first placed finish. In 1989, Little Polveir was the winner of the race, coming home very strongly on heavy ground to beat West Tip by seven lengths.

The winner really liked the conditions on the day, with the heavy ground bringing out his stamina. West Tip wasn’t at home as much as him, which is the main reason for the result being the way that it was.

Despite not winning the race, West Tip was adding more into the history books that would write him legendary status, with a second-placed finish here making it three placed efforts in a row after his win.

Given the way round these had happened, West Tip deserves even more success for what he did. The moment he won the Grand National, he did something that would ensure he would forever be burdened with a big weight in the race because he would be judged as a former winner. So to come back and place in three races in a row, including one where he finished second on unsuitable ground, was a huge achievement for the horse.

This near miss in 1989 would not be the final time we saw West Tip in the Grand National, but it would be his last run in the race with Richard Dunwoody on board. He had been there every step of the way but would not ride the horse in 1990, instead, Peter Hobbs would take the ride. That final run would result in a 10th-placed finish, so he would not add to his run of placed efforts, but it was another clean round for the horse, and a sixth and final attempt at the race, to further endear himself to the public.

Racing Career Almost Over Before It Started

The story of West Tip and what he did in the Grand National is fascinating on its own. However, there is another dimension to the story, based on something that happened earlier in his career off the track, and had the horse not been so lucky, his career may never have actually got started.

West Tip was involved in a freak accident one morning, where he was hit by a truck, which caused significant damage, left him with a noticeable scar, and could have been the start of the end of his horse racing career.

In 1985, One morning, while going out on the gallops at the Michael Oliver yard, horses were waiting for the arrival of their jockeys, with West Tip waiting for Phillip Hobbs before they could go out onto the gallops. The morning was foggy, with poor visibility, and as the horses were walking along a lane, a truck approached the horses and went past them. Unfortunately, West Tip, who was the last horse in the string, spun round as the truck went past him and was unfortunately hit by the truck during this move.

A hook which was on the side of the truck went on to hit West Tip on his hindquarters and tore a big hole in his body. The driver did not stop and drove away, leaving the horse in great difficulty on the road. He required a large number of external stitches to patch him up, as well as 70 internal stitches. There was talk at the time that he would have to be put down due to the injuries before he had even hit the racecourse.

However, the surgeon was able to stitch him up well and allowed the injury to make a full recovery, although a scar was clear and visible for all to see, a reminder of the near miss he had. At the time of the accident, West Tip was not a well-known horse, he hadn’t even made his racecourse debut, we may never have seen him had this surgery not gone well.

Fortunately, it did, and as they say, the rest is history. At the very end of 1982, months after the accident took place, West Tip went to Warwick to make his racecourse debut. With no pressure on him, he was allowed to go off at 50/1 but outran those odds in great style and went on to win the race. This was the first time we saw anything from West Tip at the track, and we should be forever thankful that he was able to make the trip because the incident could have been far worse.

During his racing career, the noticeable scar on his hindquarters was there for all to see, but given what he did in the Grand National, it is easy to say that it didn’t affect his ability or mindset in any way, he went on to be a champion.

The 1986 Grand National win was certainly the biggest of West Tip’s career, but it wasn’t the only big race he won during his time. In 1985, on his final run before going to Aintree to run in his first Grand National, West Tip went to the Cheltenham Festival to run in the Ritz Club Handicap Chase, which is now known as the Festival Handicap Chase.

He won this race in good style and considering it is a 3m2f staying handicap chase, it is the ideal race to use as a prep run for the Grand National. It is because of his win in this race that many people jumped on the initial West Tip bandwagon for his first Grand National run before that race made him more famous.

Away from that run, there wasn’t too much else to write home about in the career of this horse, one that was forever focused on the Grand National and how to get there in the best possible shape. For that reason, he may have missed the odd opportunity to win something else special along the way but did turn himself into a true Grand National legend along the way.

Six runs in the biggest horse racing in the world, one victory, one second and a further two places, West Tip will go down as simply a Grand National legend, adored by the public who saw him run.