A Grand National-winning jockey, and one that had big success on both sides of the Irish Sea, something we don’t see from too many jockeys, Barry Geraghty hit the top of the game during his career. Associations with the likes of Jessica Harrington, Tom Taffe and during the latter part of his career, Nicky Henderson, all took Geraghty to the biggest stages on a yearly basis, giving him success.

In terms of the Grand National, Geraghty rode in the race 18 times across his career, with one victory to his name. That came back in 2003, when he rode Monty’s Pass to victory, trained by James Joseph Mangan.

He retired from race riding in July 2020 when he was a 40-year-old, calling time on a very successful career. At the time of his retirement, Geraghty was the fourth most successful jockey in the UK and Ireland, with a total of 1920 career wins.

Barry Geraghty won the Grand National at the fourth time of asking aboard Monty’s Pass in 2003. He’d finished 6th back in 2000, in what was his first ride in the race, and then fell on both of the other attempts, but success then came his way with Monty’s Pass.

The biggest part of this story was the gamble on the horse on the day of the race, led by punters fancying the runner and a lot of newspaper tipsters also fancying the horse. When the betting market opened on the morning of the race, Monty’s Pass was one of the outsiders at 40/1, but plenty of people fancied his chance. Money came, and when he won the race, the SP returned was 16/1, which is huge considering the race involved, it takes a lot of money to move a horse like that in this race.

William Hill claimed this to be their worst Grand National in history, two bets alone forced them to pay out £400,000, as well as the many other smaller wagers from people picking this horse out or following the newspaper tipsters selecting him.

In terms of the race itself, Gerraghty deserves a lot of credit for getting around and keeping his mount out of trouble. Fourteen runners finished the race, and four jockeys were left with broken bones afterwards, this was not for the faint-hearted.

Monty’s Pass stayed on very strongly and seemingly found another gear up the run in to stay well ahead of his rivals and really put the race to bed. A winning distance of 12 lengths was given to him as Geraghty powered up the home straight to success.

After the win, Monty’s Pass was back to the race twice to try and repeat his feat, with Geraghty on board on both occasions. In 2004, they finished 4th behind Amberleigh House, while in 2005, they finished 16th, not really getting into the race.

It is fair to say that over the years, many big named trainers have trusted the talents of Geraghty and allowed him to ride their big horses. The biggest of these include Jessica Harrington and Tom Taffe in Ireland, while in the UK, the biggest partnership Geraghty had was with Nicky Henderson.

These, plus the large number of outside rides he was able to put together, formed a big part of why he was a successful jockey on both sides of the Irish Sea. With firepower behind him, Geraghty was at all the big meetings, and even when in the UK, thanks to his Irish contacts, he was always able to get on the big Irish names if they were across for a big race.

Of course, riding for big names like this is always going to bring success, and that is why Geraghty rode almost 2000 winners during his career. 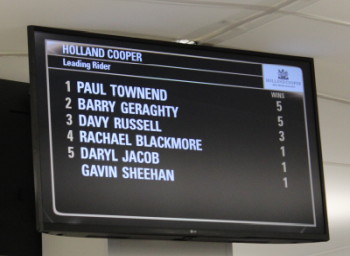 As part of those victories, Geraghty shone at the Cheltenham Festival, the biggest week in national hunt racing. To begin with, he was mainly on Irish runners. Still, when he moved over to the UK permanently, he was able to combine the firepower of the Nicky Henderson yard and his old contacts in Ireland so that he always had a powerful book of rides going into the meeting.

In total, over his career, Geraghty rode 43 Cheltenham Festival winners, with his best performances coming in 2003, 2012 and his final festival in 2020, when he racked up five winners in each of those years.

However, not only did Geraghty excel at the meeting, but he did so in the biggest races of the week. He won all four Championship races on multiple occasions over the years, riding some of the biggest names in racing to success.

The race he is best known for is the Queen Mother Champion Chase, a race he won five times over the years. The first two of those came on Moscow Flyer, while Big Zeb, Finian’s Rainbow and Spinter Sacre provided him with the other victories.

The Champion Hurdle was a race he won four times, Punjabi, Jezki, Buveur d’Air and Epatante gave him those wins, while he won the Cheltenham Gold Cup and Stayers Hurdle twice. It was very rare to see Geraghty without a ride in these races, a testament to his ability and the partnerships he put together during his career, both in the UK & Ireland.