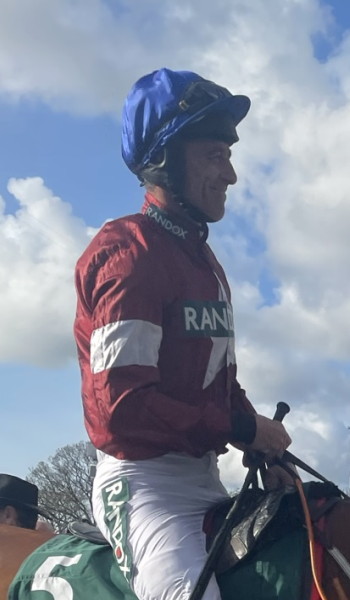 The youngest of six children when he was born in Youghal, Ireland on the 27th of June 1979, Davy Russell is one of a small collection of jockeys to boast both Gold Cup and Grand National wins during his career. He was born into a family with an interest in horse racing thanks to the fact that his father owned racehorses and as a family they would walk puppies for the hunt that took place locally.

He began his career as an amateur by racing point-to-point races in Ireland and moved to England to begin his professional career in 2002. He almost immediately took to the world of hurdle racing, gaining his first win in a Novice Hurdle at Sedgefield in November of 2002. Arguably the finest moment of his career came in 2019 when he took Tiger Roll to his second successive Grand National win, becoming only the second jockey to achieve this since Brian Fletcher did so on Red Rum in 1974.

Born David Niall Russell and raised on a farm in County Cork, Davy Russell rode ponies as a youngster and helped his dad out with the horses that he owned. Would he still have become a jockey if he’d known then that he would go on to break both of his eye sockets, both of his collarbones, puncture his lung and suffer numerous concussions in his pursuit of glory? Probably, especially if you told him that he’d also have Grand National and Cheltenham Gold Cup wins to his name along the way.

The Early Part Of His Career 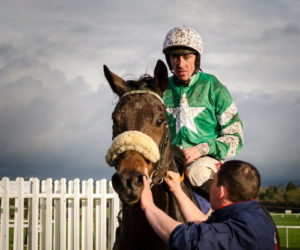 He started his life as a jockey by taking part in the amateur point-to-point races of Ireland, earning his first win in February of 1999 when he was also working at a fish factory to earn money. He turned professional in 2002 and moved to England to work with the trainer Ferdy Murphy in the Yorkshire town of Middleham. It proved to be an inspired decision, earning his first win in the Novice Hurdle race at Sedgefield in November of that year. He remained in England for two seasons, making a name for himself on the back of Truckers Tavern by coming second in the Gold Cup in March of 2003.

He moved back to Ireland in 2004, working with Edward O’Grady for for a season before becoming a freelance jockey for a couple of years. Having already won as a professional in his native country on the back of Colonel Monroe in December of 2002, Russell continued to earn a reputation as a reliable and fearless jump racer. In March of 2006 he began what was to be a long and fruitful love affair with the Cheltenham Festival when he won the Cross Country Chase on the back of Native Jack. He won again the following year on Joes Edge in the Festival Trophy Handicap Chase.

The Retainer With Gigginstown 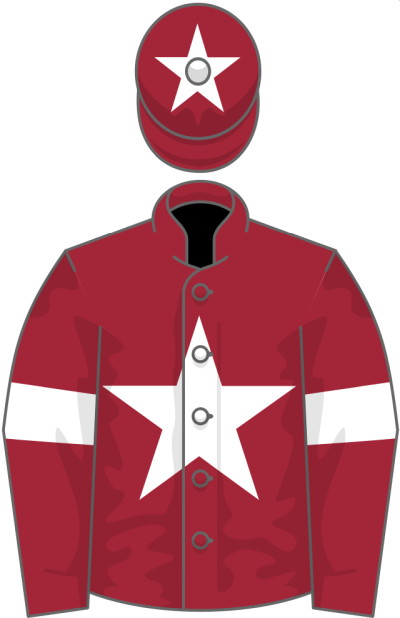 His success was enough to earn the admiration of Michael O’Leary who signed him up on a retainer for his Gigginstown House Stud in September of 2007 and it was a relationship that would prove to be a successful one. He won both the Coral Cup and the Grand Annual Chase at the following year’s Festival, then added the Albert Bartlett Novices’ Hurdle in 2009 and the RSA Chase in 2010. In 2011 he did another Festival double, this time combining the Coral Cup with the Neptune Investment Management Novices’ Hurdle.

His biggest win at Cheltenham actually came after he’d departed Gigginstown, dusting himself off in the wake of Michael O’Leary inviting him for a cup of tea and then sacking him in December of 2013 by leading Lord Windermere to Gold Cup success in 2014. O’Leary’s decision to sack him was seen as odd in some quarters, considering he’d been named the Irish National Hunt champion jockey at the end of both the 2011/2012 and 2012/2013 season, yet his ability to prove the Ryanair owner wrong rather than to allow his sacking to make him consider his profession is a sign of the man’s mental strength.

Obviously we’re mainly interested in the Grand National here, but the fact that he won at least one race at the Cheltenham Festival for thirteen years running between 2006 and 2018 is a sign of his ability to handle jump racing as well as the biggest occasions. The Gold Cup is arguably the only race that comes close to the Grand National in terms of being a test for a jump horse and its jockey, so the 2014 win was not just one in the face of Michael O’Leary but also a foreshadowing of what was to come.

Russell is also a jockey that seems to have improved with age, boasting his most successful year at Cheltenham in 2018 when he won the RSA Chase, the Ryanair Chase, the Pertemps Final and the Mildmay of Flete Challenge Cup in quick succession to match Ruby Walsh’s achievements of the year before and make himself the top jockey for that year. It also came just a few weeks before his first Grand National win with Tiger Roll, suggesting that he was in the zone at that time.

Despite his departure from the Gigginstown Stud under somewhat strange circumstances, Russell kept a good relationship with them and continued to ride for O’Leary on an ad hoc basis rather than being tied down to his stables as he was when he was on a retainer with them. It was what allowed him to ride on Tiger Roll, who came out of the Gigginstown Stud stables and was trained by Gordon Elliott, in the first place. Would he have won the race by a nose without Russell on board? It’s difficult to tell, of course, but the jockey referred to having to ‘wake him up’ as the jumped the last.

As if that wasn’t impressive enough, he repeated the trick the year later when he judged his ride on the 9-year-old perfectly in the Grand National of 2019. He kept Tiger Roll back for most of the race, moving him slowly through the field as the final fences came around before taking the lead at exactly the right moment. It was a brilliant ride from him that was borne out of years of experience of jump racing and a muscle memory from winning the year before. It also demonstrated the resilience that he’d shown in the years leading up to it, when he refused to allow Tiger Roll to be beaten just as he’d done in 2018.

Whilst he hasn’t enjoyed quite the relationship at Aintree that he has with Cheltenham, it would still be untrue to suggest that the Grand Nationals are the only races he’s won there. In 2005 he won the Topham Chase on Cregg House there, for example, winning the Aintree Hurdle with Solwhit four years later. Even so, the names of Aintree races don’t jump out quite as regularly as those of events at Prestbury Park. Doubtless Russell wouldn’t complain if you pointed it out, given he’s won the most important race at the track and done so more than once.

Russell boasts an odd celebration, posting his fingers to the sky and giving them a wag in a manner similar to one he saw on a film when he was just beginning his life as a jockey. He said it was a ‘spur of the moment’ reaction to winning an early race and he’s just continued to do it ever since. Comparing it to Frankie Dettori’s decision to jump off his horse when he wins, he said that he regrets doing it but that people would be upset if he didn’t do it any more. It’s a sign, perhaps, that Russell knows the role he plays as a well-known and much-loved jockey and doesn’t want to disappoint. Indeed, he referred to having to ‘give the people a show’ when he won on Tiger Roll in 2019.

That popularity has been reflected by Russell’s numerous appearances on television of the years. In November 2012, for example, the Irish TV channel TG4 aired a documentary with the title ‘Jump Boys’, which aired footage from cameras that had been following Russell, Barry Geraghty and Ruby Walsh during the 2011/2012 jump season. The year after that appeared in another documentary, this time for the Irish channel RTÉ One. It was called ‘The Irish Road To Cheltenham’ and explored Russell’s relationship with English jump racing’s most famous week.

He has not always been beloved of the racing public, however. In August of 2017, for example, he was caught up in an incident at Tramore Racecourse that tarnished his reputation somewhat. Kings Dolly, his mount for an upcoming race, was playing him and he was caught on camera aiming a blow at the horse’s head. He felt that the incident was made into more than it actually was, insisting that he was just trying to make her concentrate. He was originally given a caution over the matter before that was changed to a four-day suspension after public outcry.

A Selected Look At His Seasons

Having spoken about the fact that Russell seems to have improved his ability on the back of a horse as his career has progressed, it’s with having a quick look at his achievements during a selection of seasons during his career. Rather than look at every single year he’s been a jockey, here’s a snapshot of his achievements:

You can see, then, that in terms of pure winners he’s got better and better with each passing year of his career. The percentage of winning races he’s run has increased from 9.27% in the first season on the list to 20.13% on the latest, whilst his second place finishes have also increased. Interestingly that hasn’t necessarily been reflected in the amount of money that he’s won.

Of course, a lot of things when it comes to how much money a jockey wins are out of their control, with different races having different splits in terms of whether the jockey gets much prize money compared to the trainers and owners. He earned more money in the 2007/2008 season than he did in the seasons he won the Gold Cup and Grand National, as an example, which many people might assume would be different.

There’s a feeling that having something to race for is part of what spurs a jockey on to major success, so Russell will see it as no bad thing that he has a family to provide for. As well as a daughter from a previous relationship, he also has a boy with his wife Edelle O’Meara.

She is the ‘sensible’ head in the family, being a maths and chemistry teacher to lend a degree of dependability to the relationship. That being said, she is a former pole vault champion for Ireland, so she very much understands the drive that a professional sportsperson feels.

In the lab of the school that O’Meara worked at she once put red dots onto a plastic skeleton on all of the bones that Russell had broken. There were that many that the children noticed and asked her why the skeleton was covered with them. It’s fair to say that they are both more than aware of the perils that confront a trained jockey.

Russell’s mum Phyllis died just before he won the first National on Tiger Roll, with the jockey paying tribute to her after the race.