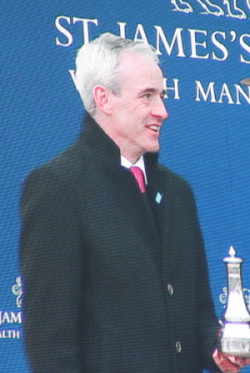 Right up there with the very best jockeys in recent years, perhaps ever, Ruby Walsh was a master horseman, with the ability to stay ice-cool under pressure and often perform at his very best on the biggest stage.

Known for a gentle approach and also known for riding horses patiently towards the back of the field before cutting through in striking fashion to come and win late. He’s been associated with several top-quality horses over the years, both in the UK and Ireland, which will come as no surprise after seeing him take the stable jockey job with both Paul Nicholls and Willie Mullins.

On the biggest stage, he was lucky enough to not only win the Grand National with his first ride in the race in 2000 aboard Papillon but to also win it for a second time in 2005 aboard Hedgehunter. Of course, he was often on a strongly fancied runner, but Walsh’s Grand National record is exemplary.

Winning The Grand National For His Dad

When Ruby Walsh won the Grand National for the first time in 2000 aboard Papillon, it was, of course, a very special moment. It was his first ride in the race to make it even sweeter, but the best element of that victory was the fact that Papillon was trained by his father, Ted Walsh.

Ted was a good trainer in Ireland, but with a relatively small operation compared to some of the bigger ones, but that didn’t stop him from having success on the big stage. Papillon would provide him with his first Grand National win, and having his son on board would have made the moment ten times better.

It was a great early sight of Walsh’s talent, and it was pretty clear that he would eventually outgrow his dad’s operation and have to team up with someone far bigger to further his career. A year later, the pair were back for more with Papillon again, he ran a great race, but with a little more weight on his back, he was unable to repeat the success and finished fourth.

Father and son relationships in sport are always special, and the day Papillon won the National is one that the Walsh’s will never forget.

Ruby Walsh is a multiple Grand National winner, and his second win in the race came aboard the Willie Mullins trained Hedgehunter in 2005. Walsh had a fantastic relationship with the horse, and they went around Aintree together a total of four times. In 2005 he won, he was second a year later and then 9th and 13th in his final two runs. Just getting to the National to run four years in a row is an achievement, but Hedgehunter not only did that, he also completed every time and won and placed in the race.

It is fair to say that the win of Hedgehunter is one of the most impressive we have seen in recent years. From two or three fence out, it was clear that he was going the best of the runners still involved and was by far the most likely winner of the race.

He jumped well throughout, enjoyed the soft ground conditions and stayed all day, so there was no doubting his stamina. In many ways, Hedgehunter was built as the perfect Grand National horse, and his win in 2005 showed precisely why many believed that.

The official winning distance on the day was 14 lengths, he was clear and away from any challengers, allowing Walsh to really enjoy the run-in and celebrate in style as he crossed the line. His win was so impressive that he was instantly spoken about as a horse that could win the race again, and while he tried, his second placed finish a year later was the closest he would get to that.

Hedgehunter was a Grand National star, ridden by Ruby Walsh perfectly in all four races and to victory once.

It is worth mentioning the overall Grand National record that Ruby Walsh had during his riding career. He was excellent around Aintree, with his style enabling him to look after horses, get them into a rhythm and give them the best chance of staying the trip. You can see that, not only because he won the race twice, but just by the amount of placed horses he rode in the race and by how many times he managed to complete the course.

He rode 14 times in the race and completed the course in 11 of those. The three times he didn’t, he pulled up once, fell once and was brought down once. He won the race twice and placed a further five times, so in 50% of his attempts, he placed or better. In 10 of the 14 races, he managed to claim a top 10 finish, which again goes back to how he brilliantly looked after a horse in a race and gave them the best chance to complete and get involved.

While Paul Nicholls didn’t provide Ruby Walsh with a Grand National winner and actually only gave him two rides in the race, there is no doubt that their partnership ruled the horse racing world for a number of years.

What helped them stand apart from the rest of racing was the fact that their dominance came on the biggest stage. This wasn’t minor meetings on a Tuesday afternoon, the pair dominating Cheltenham, Aintree and many big Saturday meetings, quickly becoming loved by punters up and down the country.

In 2013, Ruby Walsh announced that he would be splitting with Nicholls after almost a decade together. The reason was that Walsh wanted to spend more time in Ireland with his young family, not wanting to commit to the UK anymore. The split was amicable and brought to an end their dominance in UK horse racing.

During their time together, Walsh was the top jockey at the Cheltenham Festival on seven occasions. This perhaps more than anything else, highlights the dominance they had over British racing, not as a whole, but at the very top table, where the best horses, trainers and jockeys take each other on.

Moving Back To Ireland Full Time With Willie Mullins

When Walsh was riding for Paul Nicholls, he still managed to split his time between Ireland and Britain, linking up with many trainers, including his dad and Willie Mullins. He was a regular in Ireland and actually won the Irish Jockeys Championship six times while being stable jockey to Nicholls, showing how committed he was to riding at the time.

He spent many of those years building up a strong bond with Willie Mullins, and this is who Walsh turned to when he returned to Ireland full time. From the moment he went home, his relationship with Mullins grew, and this was timed perfectly with Mullins going from strength to strength with his team.

The likes of Douvan, Faugheen, Quevega, Hurricane Fly and Vautour are just some of the superstars that came from the Mullins yard, while Ruby was a stable jockey and riding the best horses. Again, during his time there, Walsh was praised heavily for his riding style, his ability to look after horses, and most importantly, his ability to deliver on the biggest stage when under pressure.

Walsh did not ride frequently enough in Britain to win the jockeys championship for Paul Nicholls, but with less racing in Ireland, he did win it there. He was a 12-time winner during his career, the first came in the 1998/99 season, and his last was in the 2016/17 season. While his dad helped along the way, as a few others did, the majority of his rides came from Willie Mullins, a partnership that dominated Irish racing for many years.

A Jockey For The Big Occasion

When you look back on the career that Ruby Walsh carved out for himself, there is only one thing that stands out, and that is the ability he has to ride brilliantly on the big occasion. Walsh was on top form when the big rides came along, whether in the UK or Ireland.

His dominance at the Cheltenham Festival, the biggest week in national hunt racing on either side of the Irish Sea, shows precisely how good Walsh was on the biggest stage. He was the top jockey at the festival a total of 11 times, and he did that in a period of 13 years, the first came in 2004 and the last in 2017.

Each year, he had Paul Nicholls, Willie Mullins or both behind him, providing him with the winners he needed, and when two men of their ability trust you, you know you are doing something right.

Walsh may not have turned up for midweek British racing too often, which is why he never really challenged Tony McCoy for the jockey’s championship, but he did win it in Ireland. However, that is not what Walsh was about, he was about the big races on Saturdays, the big meetings and the big festivals.

From Cheltenham jockey championship to a couple of Grand National wins, punters from that era would probably choose no one other than Walsh to ride their big mounts.

Life On TV After Racing

After riding Kemboy to victory in the Punchestown Gold Cup, Ruby Walsh announced his immediate retirement from race riding. Rumours were circulating before, and he finally made it official after yet another Grade One success. The race was his 213th win at Grade One level, rounding off a remarkable career.

We all saw what Walsh did as a rider, and after that, we saw his brilliance on offer in a different way. After leaving the saddle, Walsh began his career in front of the camera on TV, working on both sides of the Irish Sea, offering insight into horse racing.

Amongst tipsters and others, Walsh quickly stood out because he was able to read a race to perfection. He spent time explaining the right and wrong decisions made by jockeys and promptly became one of the business’s best and most sought-after race analysts.

When it came to the likes of the Cheltenham Festival or the Aintree Grand National meeting, Walsh was a man in demand, everyone wanted him as part of their programming. His race riding was top quality, and now we get to see great insight from Walsh on TV, pinpointing his views at all the significant racing events.