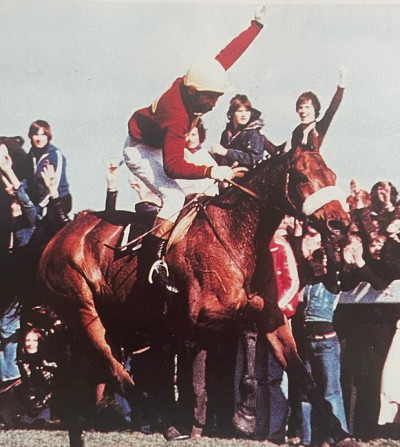 When you think of the Grand National, the horse that will more than often come into your head first is Red Rum. His rider, in his final two Grand National attempts, was Tommy Stack.

Stack rode the horse to victory once, finishing second on the other occasions. He rode a total of six times in the race, and these were by far his two most successful attempts, with nothing else coming close to repeating, he actually fell in three of the six attempts.

Born in 1945, Stack spent the first part of his racing career in the saddle and had plenty of success. He was a two-time national hunt title winner as a rider, and these came when he went into partnership with W Stephenson. The second part of his racing carer was as a trainer, he retired from riding in 1978 and took out a trainer’s license in 1986.

Red Rum made history in 1977, winning the Grand National for a third time, a feat that no one else has been able to match. On board that day was Tommy Stack, having his second National ride on the horse and just his fifth overall.

Despite being a legend of the game, Red Rum was sent off at 9/1 on the day, behind Andy Pandy, who was favourite and the choice of punters who believed that Red Rum was now too old at 12. Preparations were mixed for the horse, he started the season poorly but was right back to his best in work at home on the eve of the race.

Everyone wanted the horse to win, few believed he actually would, but they were certainly wrong. The race was messy, almost half of the 42 starters had departed by the time we reached the second circuit.

When we got there, Boom Docker, who was well ahead of the field, refused to jump, Andy Pandy, pre-race favourite, was a faller, and all of a sudden, Red Rum and Tommy Stack were miles clear of the field. History was about to happen, all Stack needed to do was guide his mount home.

He knew his way home around Aintree, there was no doubt about that, and the public were roaring him home, a mix of those who had backed him and those who wanted to see a great story happen live.

The final two fences were jumped without drama, and then up the run in, the crowd went wild for Red Rum and Tommy Stack, with the rider able to enjoy the moment as he brought the champion home.

Those watching at home got a real glimpse of what Stack was doing, but the experience could have been far better had Stack not pulled out of an agreement with the BBC at the last minute before weighing out.

He was supposed to weigh a microphone, capturing the sounds of a trip around Aintree, but when the BBC gave Stack the microphone in the weighing room, he didn’t like the size of it and refused to put it on. Had he taken part, we would have heard what it was like from his perspective, the ride itself, the cheers for the pair coming home, and the overall jubilation we saw on the run in.

The injury ruled Red Rum out of the Grand National a year later, he was then retired, so this was the last time he ran in the big race, and it was a winning one to bow out on. Tommy Stack was the lucky man on board, riding Red Rum in his last two Grand Nationals and being victorious at the second attempt, creating history in the process.

Finishing Second A Year Earlier In 1976

Prior to their victory in the race, Tommy Stack and Red Rum had been close to winning the Grand National in 1976. This was Stack’s first National on him, and there was no doubt a lot of pressure on the rider, this horse, by now, was the horse of the people, and everyone wanted to see him win.

The problem was the weight he had to carry, which had found him out in 1975, and would do so here. Stack gave the horse a great ride and gave him every chance of winning the race, but there was so much weight on his back that he was unable to reel in the leader Rag Trade.

It was a gallant effort from the pair, but just like Brian Fletcher in 1975, Tommy Stack in 1976 was unable to bring home glory and re-write the history books this time around.

Of course, Red Rum did eventually manage to do that in 1977, bringing an end to a wonderful Grand National career, giving him three wins, and becoming the only horse to do that.

A Move Into Horse Training

In May 1978, Tommy Stack decided to retire from race riding at the age of 32. This was early for a jockey, but he’s rode 602 winners during his time, so a very strong effort. The Grand National was the biggest of those and ranks as his best achievement in the saddle, alongside winning the jockey’s title on two occasions.

A few years later, in 1986, after time to work out what he wanted to do next and get himself prepared, Stack took out a trainer’s license. He would have most success on the opposite code, with flat runners, and that includes winning the England and Irish 1000 Guineas over the years.

At the end of the 2016 flat season, Tommy decided it was the right time to call it a day and retired from training. He left the license behind and left his son James “Fozzy” Stack to run the yard.

Over the years, we’ve seen Tommy involved in some big racing stories, from winning the jockey’s championship to training classic winners in later years. His association with Red Rum, and the Grand National win of 1977, stand out as being the biggest, however.