Considered by many as the greatest national hunt jockey to ever live, and for those who aren’t quite sure, legendary status is certainly well cemented.

On the big stage, McCoy came to life, from big rides at the Cheltenham Festival, to multiple attempts at the Grand National, before eventually winning the race in 2010 on Don’t Push It. Many jockeys dream of winning one Grand National, but with McCoy, there is a case to be made that by winning just one, was a slight disappointment. He had so many fancied rides in the race but hit the net just once, with five third placed finishes alongside that win.

Born on May 4th, 1974, he rode his first winner in 1992 at the age of 17 in Ireland, and from then on, the only way was up. Multiple awards and records came along the way, as well as big race wins, a legend of the sport, adored by punters around the UK & Ireland, a name that will forever be associated with national hunt racing.

The Struggle To Win A Grand National

For a man having so much success during his career, there was always much talk about the one that eluded McCoy for so long, the Grand National. Seemingly every year, during the peak of his career, he was in with a great chance of winning the race, with a horse apparently set up perfectly for it.

In his early days, things didn’t start well, as McCoy failed to finish in his first five attempts at the race. He then finished third on Blowing Wind in both 2001 and 2002. Clan Royal was the next horse set up for him to succeed on, and in his best chance in 2005, he was carried out by a loose horse when travelling very well and looking to hold every chance. The same horse gave McCoy another third placed finish a year later, carrying more weight, a good run, but shows how good his luck was 12 months before.

L’Ami and Butlers Cabin were two more horses to follow, but neither could get McCoy over the line in the first place. At this stage, despite his brilliance everywhere else in the world of horse racing, the big question was, ‘Will AP McCoy ever win the Grand National?’

Fortunately, after years of trying, in 2010, Tony McCoy would go on to finally get this monkey off his back.

The win McCoy deserved finally came, Don’t Push It was the horse that gave him the memorable victory, trained by Jonjo O’Neill and owned by JP McManus, the two most prominent supporters of McCoy’s riding career.

At his 15th attempt to win the race, McCoy came home in front on the 10/1 joint-favourite. One more loss for McCoy, and he would have equalled the record held by Jeff King for the most significant number of rides in the race without a win.

The race had plenty of casualties, with just 14 finishing the course. You needed luck to get around, which had eluded McCoy in the past, but it was on his side here. Over the last, Don’t Push It and the eventual second Black Apalachi were locked together, but after that jump, McCoy did precisely what he does best, drive home his mount.

There was plenty left in the tank, and the horse responded brilliantly to McCoy’s urgings, pulling clear up the run to record a five-length winning distance. Celebrations, both from punters in the stand and from connections in the winner’s enclosure, showed just what this meant to the racing world and everyone associated with McCoy.

No one has ever dominated racing like Tony McCoy, and it is likely that no one ever will. He retired with a total of 4348 total wins in national hunt racing, with a further 10 wins on the flat to go with those.

He started with a bang, breaking a record as a conditional for the most winners in a season as one of those. This came riding as an apprentice for Tony Balding, and he rode 74 winners that season, a remarkable achievement, but even more so for one that came during his first season riding in the UK.

He didn’t have to wait too long to move from being the champion conditional rider to being the overall champion jockey. McCoy won his first British national hunt top rider title in the 1995/96 season with 175 winners. If you want to know anything about McCoy, the type of person he is, and the dominance he has had in the sport, what happened next will show you that.

After winning his first title, McCoy went on to win the jockeys’ championship every single year until he retired in 2015. For 20 years, based on the number of winners, he was top of the sport, year in, year out.

Many who hit the heights he did would slow down and take days off during the lesser periods of the season, especially at smaller midweek fixtures, but McCoy didn’t do this. He kept going, and whether it was Cheltenham, Aintree, Southwell or Taunton, the same man came to work and put everything into his riding.

Once the champion conditional jockey, followed by winning the champion jockey title 20 times. The best of those years was the 2001/02 season, where McCoy broke the record for the total number of winners in a season with 289. This surpassed the 269 record which Sir Gordon Richards set in 1947.

It is all of the above together which made McCoy special and allowed him to stand out from the crowd. 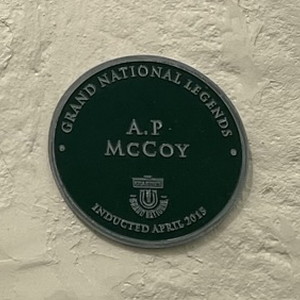 McCoy was lucky enough to win many of the big races in racing, and when it comes to Grand National races, he won all four available. Don’t Push It in 2010 landed the Grand National, while he won the Welsh Grand National at the end of the same year aboard Synchronised.

At the Cheltenham Festival, he recorded two Cheltenham Gold Cup wins aboard Mr Mulligan in 1997 and Synchronised in 2012. He won the Champion Hurdle three times with Make A Stand in 1997, Brave Inca in 2006 and Binocular in 2010. Edredon Bleu won him the Champion Chase in 2000, and that left the Stayers Hurdle as the only Championship race at the festival that he did not win during his career.

The very best jockeys are often backed by either big owners or trainers, who provide them with the winners they need to rise to the top. When it comes to AP McCoy, without a doubt, the two most important people behind him were owner JP McManus and trainer Jonjo O’Neill.

McCoy rode for McManus for most of his career, and McManus had most of his horses in training with O’Neill during their most successful period. With the assistance of McCoy from the saddle, this trio won several big races over the years.

But it wasn’t just about providing McCoy with big race winners. He won the jockeys’ championship 20 times, and you can’t do that by riding big winners only. McCoy would happily go around the country riding six or seven days per week, and O’Neill and McManus had the ammunition for him to do that. Of course, he had many outside rides too, but the backbone of his success was in the famous green and gold colours and from the Jonjo O’Neill yard.

All three gave each other what they needed and slotted together brilliantly. For years, they were dominant in the game, not just on Saturdays and at the big meetings, but anywhere you looked.

Honours Away From Horse Racing 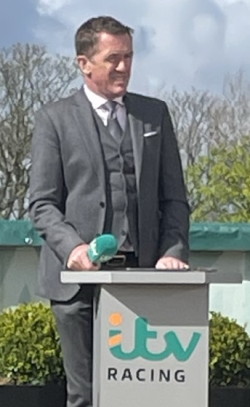 Many jockeys and trainers have significantly impacted racing, and they have gone on to showcase their skills at a very high level. But away from racing, this often doesn’t hit home, and people not involved with the sport do not really know of them.

AP McCoy is different. Not only did he dominate the sport of horse racing, but he took this to the wider world of sport, and he received recognition away from the racing hub, showing that he was recognised as a successful sportsman, not just a success inside racing.

Awards away from racing began in 2003 for McCoy. He was recognised with an MBE from the Queen in the birthday honours list, the first recognition he would receive. This was taken to the next level in 2010, the year of his Grand National win, when he was given an OBE, the next step up the ladder.

Finally, McCoy reached the top on the 2016 New Years’ Honours List after he had retired from the sport. He received a knighthood here to make him Sir Anthony McCoy, a real recognition of how much he had given to the sport of racing and elevated it to the next level in terms of coverage.

After dominating the sport, McCoy had never won the Sports Personality of the Year award, which showed where racing sat in the priority order of sports fans and journalists in the UK. However, things changed after winning the Grand National in 2010, and McCoy finally won the award. This was seen as a recognition of his success in the race, but also what he had achieved over the past few years, dominating the sport, and collectively, that was enough for him to pick up the award.

In 2015, after retiring from racing, McCoy was given the Sports Personality of the Year Lifetime Achievement Award, recognising his dominance in the sport of racing over a period of more than 20 years.

Many will have fond memories of McCoy riding winners for them, whether that was in a big race such as the Grand National, at the Cheltenham Festival, or at one of the quieter midweek meetings, where he so often had success.

The build-up and anticipation of him winning the Grand National made his win even sweeter, but when you look back at his career, winning the race just once, there is undoubtedly a case to be made that he could have won at least another race with a bit more luck.

Having said that, his skills certainly cannot be questioned, and he will go down as one of the greatest, if not greatest, jockey of all time.