A race where history was made, the one that brought a nation together to cheer home a horse that had simply become a legend of the sport. The 1977 Grand National would see 12-year-old Red Rum make history, winning his third Grand National and becoming the first horse to ever achieve that feat.

Winner of the race in 1973 and 1974, he’d finished second in the most recent two running’s of the race. That, combined with struggles in the season, meant that the superstar who was loved by the public wasn’t even the favourite on the day for this one.

That didn’t stop him, though, and the cheers to bring him home were as loud as anything we have ever heard at Aintree or any other racecourse. It was a procession in the end, with only loose horses anywhere near the champion, as he came home to win by a margin of 25 lengths.

What Happened In The 1977 Grand National?

A total of 42 runners went to post for the National in 77, a large field, though just 11 of them were able to complete the course. Plenty of drama on the first circuit led to 19 runners out of the 42 being out of the race.

Boom Docker was taking the field along at a rapid rate, and he’d built up a substantial lead as the horses went out on the second circuit. His presence so far ahead was going to be a test for those in behind, knowing when to time their challenge, but he wasn’t there for long. Boom Docker refused at the 17th fence, ending his chances of winning the contest.

Andy Pandy went to the lead, he was strongly fancied by many to run a big race and was actually sent off as the 15/2 favourite. Given the amount of public support behind Red Rum and the millions of people who will have backed him to win three Nationals, there must have been some serious support for Andy Pandy against him to be ahead of Red Rum in the betting market.

However, just when he was going well and had Red Rum travelling nicely behind him to set up a race, Andy Pandy fell at Becher’s Brook on the second circuit. This took away Red Rum’s main danger and left him out in front.

Red Rum was going really well at this point, and the same couldn’t really be said about those in behind. As each fence came, Red Rum jumped well and seemed to extend his lead over the chasing pack, with no signs of anyone being strong enough to come out and give him a race. 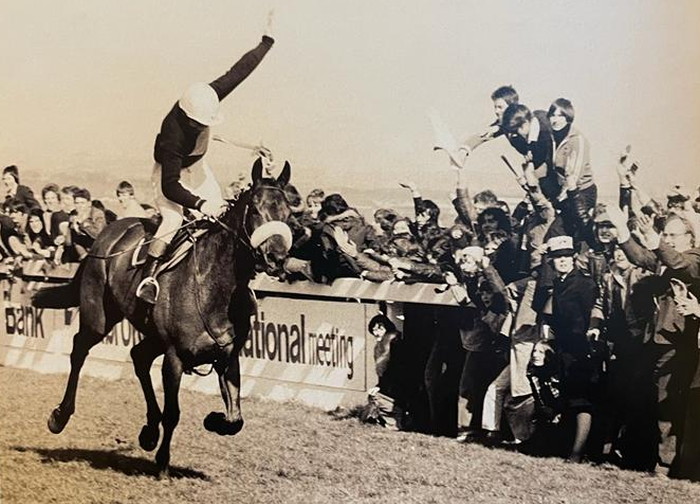 At the final fence, he was over in great style, the obstacles were out of the way, and it was simply a case of getting up the Aintree run-in, something we’d seen him do in great style twice before. The only thing in the way was the few loose horses who were on the run-in, but these weren’t going to stop history.

Jockey Tommy Stack was able to cruise home up the run in and really enjoy the moment, celebrating in the final few yards, knowing that he was sat on top of a history-maker. The crowd, as you can imagine, were all roaring home the winner. It sounded as though every single person inside Aintree racecourse had backed him to win, though, of course, many were cheering him on for sentimental reasons and because they knew they were witnessing history on the track.

At odds of 9/1, considering the amount of public money for him, this was a bad result for the bookmakers, which is often the case when a household name or previous winner takes the Grand National. This was ten times greater than any other instance, given the love for the horse and what he had achieved over the years.

Winning the race at 12, this would be the last time that Red Rum would be seen in the Grand National, rounding off what was an incredible career. He was hoping to run a year later in 1978, but injury ruled him out of that race.

Not only did Red Rum do that, but by winning in 1977, he made history by becoming the first horse to win three Grand Nationals. Given the tough nature of this race, what it takes to win, and the fact it is a handicap, which means you carry more and more weight the better you are and the more you win, all combine to create something very special.

Wins in 1973, 1974, and this race in 1977 are where we saw Red Rum at his very best. The test of the National, the course at Aintree, and the love from the public were all enough to create something special, and it brought out the very best in him.

BBC Trial Jockey Microphones But Miss Out On History

The BBC brought in some new technology to enhance their coverage of the race, though things didn’t go to plan, and on top of that, they also missed out on history at the last minute. Let’s cover the last part first.

The BBC introduced jockey microphones, hoping to capture the thoughts and sounds of a jockey while they were going around Aintree. Given that this was the first time this had been used in the race, they wanted to start with a big name. The BBC chose Tommy Stack to ride with a microphone on for his ride on Red Rum. However, this was not planned properly, and the first time Stack saw the microphone and equipment he needed to wear was right before the race in the weighing room.

He didn’t like the look and size of it, thinking that it would distract him and make him uncomfortable. Considering he was riding a strongly fancied horse in the biggest race on the calendar, he decided against being recorded and refused to wear the equipment.

At the last moment, the BBC managed to get Graham Thorner, rider of Prince Rock, to wear the equipment and recorded what he had to say. However, unfortunately for the BBC, Thorner forgot he was wearing the microphone in the race and was recorded for three minutes in total, though he was constantly using foul language, so much so that none of the recordings could be used.

At the 12th fence, when he exited the race, this was at its worst, so the BBC had nothing to show for their new technology. Had this gone better, and had they convinced Stack to wear the equipment, they would have been recording one of the most famous wins of all time, certainly, the most famous Grand National win, but it wasn’t to be.

Another piece of history can be found in the 1977 Grand National, though, of course, given the stature of the winner and what he achieved, this was lost a little in all the excitement. This piece of history revolves around 21-year-old Charlotte Brew, she became the first female jockey to have a ride in the race, she took the mount on Barony Fort.

The first three-quarters of the race was great for her, she was never really in contention to win the contest, but managing to keep out of trouble and having a great ride around. However, this all came to an end at the 27th fence when her horse refused to jump the obstacle and left her with no option but to pull up.

Female riders are now a far bigger part of the Grand National, but if you want to know where it all started for them, then Charlotte Brew is the name you need to remember, she was the first.