We usually associate horses from Great Britain and Ireland with the Grand National, but the 1980 race had a completely different feel to it, an American feel. Ben Nevis was the winner of the race after being pulled up when strongly fancied a year before.

He dominated the American racing scene before being sent to the UK, with the Grand National his target. At the second attempt, he landed the race and also bagged a second win for his trainer Tim Forster.

The race was a real war of attrition, a tough contest that only four runners managed to survive. Thirty runners went to post that year on ground described as heavy and to add further to this story, it was reported afterwards that the horse was suffering from a cough in the build-up to the race. He was only allowed to race because of the people that had travelled across from America to watch him run, a move that turned out to be a great one.

What Happened In The 1980 Grand National?

The most significant talking point ahead of the contest was certainly the ground. This was described as heavy, and it certainly was, with plenty of rain in the build-up and on the day of the race itself. Despite the bad ground, 30 runners went to post to take their chance, but many were soon out of the race, as the test was too brutal for many.

Four runners managed to complete the course, and as you can imagine, they came home at big intervals. Ben Nevis was the first of those home, he won the contest by 20 lengths, coming clear of the field in the mud, and the other gaps between those to get home were 10 and 15 lengths, this really was a slog.

In 1979, Ben Nevis was fancied by many in his first Grand National, so much so that he was sent off at 14/1 for Tim Forster and Charlie Fenwick. This time around, he was much bigger, returning with an SP of 40/1. There was more to know about the horse this time around, he wasn’t the unknown quantity from America that we saw in 1979, and on top of that, there were question marks around how he would handle the ground.

At the time of arriving at the 1980 Grand National, Ben Nevis had 12 races under his belt in Europe and failed to win any of them. Things were about to change.

As horses fell out of the race, the task for Ben Nevis became easier and easier, and when on the second circuit, despite having a few fences left to jump, the race was his to lose. At Becher’s Brook on the second circuit, the main and probably only challenger to Ben Nevis, Delmoss, fell. At this point, Ben Nevis was well clear, nothing behind looked capable of catching him up to make a race of things, and it was merely a procession to end the contest, all Ben Nevis needed to do was get round in one piece.

That he did, and he would go on to stroll up the run-in, obviously tired but still able to keep going, and win the race by 20 lengths, with 11/1 shot Rough and Tumble coming in second place. Rounding off the finishers, The Pilgarlic was third, and Royal Stuart was last to complete in fourth.

By winning the race, Ben Nevis would become the third American-owned horse to win the Aintree Grand National, and in the saddle, Charlie Fenwick became the second American amateur rider to win the contest. 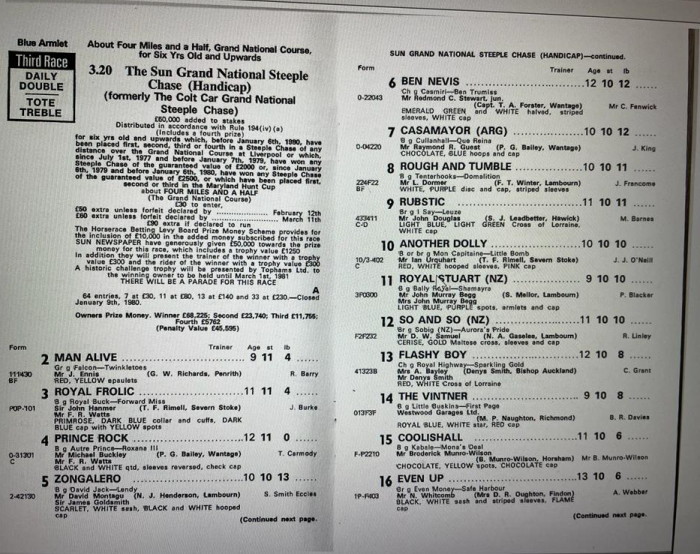 Ben Nevis and Charlie Fenwick added a fascinating element to both the 1979 and 1980 editions of the Grand National. These were the only two races we saw them in, but they certainly enhanced the contest and, in particular, in the first race, gave punters something else to consider.

Racing in Great Britain is well-liked all over the world and often stands out as being some of the highest quality out there, something we saw with Ben Nevis. He completely dominated the sport in the USA, and truth be told, he was simply too good to run in races over there, which is why he was sent to the UK to run, in order to be tested further and win some bigger pots.

During his American career, the horse won eight times and set two new course records in the process. He won back to back editions of both the Maryland Hunt Cup and the Maryland Grand National point to point race, After completing this, there was little left for him to do, which is when the decision was made to return him to the UK and put him in training with the Grand National in mind.

Charlie Fenwick was an amateur rider from the US who had ridden the horse to success over there. He was a merchant banker by trade but travelled over to the UK to ride Ben Nevis on several occasions, including his two Grand National runs.

The pair added a real American flavour to the race and came out on top in 1980, gaining compensation for their loss in the 1979 race.