If you want a feel-good story from the Grand National, then there are fewer that will tug at the heartstrings more than the 1981 Grand National and the win of Aldaniti. The horse had been nursed back to full health for the race from injuries that dated back as far as five years before the contest.

He was ridden by Bob Champion, who had his own issues ahead of the contest. Champion had been diagnosed with testicular cancer in 1979 and had chemotherapy and a long spell in hospital, where he was able to make a recovery. He would come back to win on the biggest stage of them all, fighting cancer and beating it, much to the delight of everyone in racing and the wider British public.

In terms of the race itself, Aldaniti went on to win the race by four lengths after being sent off as the 10/1 second favourite. He beat the favourite, Spartan Missile, who was sent off at 8/1.

What Happened In The 1981 Grand National?

Thirty-nine runners went to post for the 1981 Grand National, and of those horses, 12 were able to successfully navigate the course at Aintree and get home. Aldaniti was the one who came home in front, and it was the story behind the horse and jockey that made this extra special.

He won nicely, recording a winning distance of four lengths from Spartan Missile. It was Aldaniti who led coming up the run-in, and he was able to dig deep and keep ahead of his rival, always holding him enough to record the win.

The first two home were also the first two in the betting, both fancied, with Spartan Missile showing strong form in the build-up and Aldaniti showing up well while also carrying the sentimental money, given the story behind him and jockey Bob Champion. It was the weight of public money for Champion that really pushed the horse forward, sending him off at 10/1 and the second favourite.

Champion wasn’t the only great story to come from the jockey’s weighing room that year, in second on Spartan Missile was 54-year-old grandfather John Thorne. He was an amateur rider, but despite his advancing years, he gave the favourite a great ride around and nearly came up to win the race in the closing stages but was ultimately just held off by the winner.

Aldaniti was a top-class horse for many years, and prior to the severe leg injury he suffered in 1979, he had finished third in the Cheltenham Gold Cup and second in the Scottish Grand National. He was off for over a year after his injury, coming back with the Grand National of 1981 as his main target.

Of course, plenty of people had doubts about the horse returning after such a long time off and a bad injury, but in the Whitbread Trial Chase at Ascot in February of 1981, those were all laid to rest. He won well that day, showed he was as good as ever, and really pushed himself firmly into the Grand National picture.

Spartan Missile was ahead of him in the betting, and that was all due to his exploits in the amateur field. He was a dual winner of the Foxhunters Chase at Aintree, ran over a shorter distance, but using the Grand National fences, to give him experience.

During the race, Champion took Aldaniti to the front on the first circuit, a move that allowed him to really find his rhythm in the race and, ultimately, a race-winning move because he was not passed from this point onwards. Strong staying power and the ability to jump well around Aintree came together, and nothing could get close to the horse, running out a great winner and a much loved one at that.

Horse And Jockey Fighting Back From Troubles 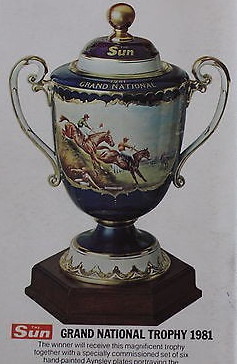 If you want to get a sense of just how much the public wanted this horse to win, both for the horse and the jockey, then you only need to look at what happened a day after the Grand National win at Aintree.

When the horse returned back home to his stables with Josh Gifford, it was recorded that more than 3000 people were in attendance at the yard to welcome him home. There was a special love for the winning pair, one that will probably never be matched again, given the dramatic story associated with their comeback in the sport.

Aldaniti had a very serious leg injury when he was at the top of his game. After his strong performances in the Cheltenham Gold Cup and the Scottish Grand National, the world was at his feet, but that was all put on hold for more than a year because of the injury. The horse would not be guaranteed to come back the same, but a strong training plan and clear target that Josh Gifford had set certainly helped with the recovery.

When he came back, the Whitbread Trial Chase win was the first glimpse of him being special, and the Grand National really topped it all off.

The story of Aldaniti is big enough alone before you begin to mention Bob Champion, he adds another huge dimension to things and is another story of courage and coming back strong. In 1979, Champion was diagnosed with testicular cancer, one that was treatable , luckily for him, but one that really took its toll. He would spend a long time in hospital, on a recovery path that included chemotherapy, which would no doubt have really taken it out of Champion.

But he wanted to come back and ride again and was determined to do that, something that was the driving force behind him winning the National. He did return to the saddle and wanted to enjoy things and have as much success as possible. His heart, determination and desire to be at the top of the game were all in abundance from the moment that Champion was back in the saddle.

At the big meeting, the public wanted him to have success, and his name and story were no doubt a big reason as to why many people backed Aldaniti to win the race in 1981. Getting back into the sport after his cancer treatment was a massive achievement for Champion, and one that should never be underestimated. But to go on and win the biggest race on the calendar, well, that was just a special moment that many people will never forget.

The pair would be awarded the Sports Personality of the Year Team Award for their victory in the Grand National, while eventually Champion would go on to receive an MBE in 1982. This was later upgraded to a CBE to add on his services to cancer research, which came through his fundraising for the Bob Champion Trust, something he set up in 1983, a charity that has since raised millions of pounds for cancer research.

Separately, the stories of Bob Champion and Aldaniti are both strong enough to be some of the best stories we have ever had in the history of the Grand National, and together, they become even stronger. For both to fight so hard, return to the sport they love, and then win at the highest level with each other really is a fairy tale finish for the pair of them.

The Bob Champion Story After His Grand National Win

While footage and thoughts of the Grand National wins over the years are not always easy to come by, the great news for fans of the race is that the 1981 edition is one of the most accessible we have.

The story of Bob Champion winning the race was simply too big to leave alone. After the race, Champion wrote a book with close friend and journalist Jonathan Powell, which is titled ‘Champion’s Story’. The book would detail his battle with cancer, along with his thoughts about coming back and the journey he took to do that, all leading towards the big race at Aintree.

In 1984, this book was turned into a film, which was titled ‘Champions’, and John Hunt was the man chosen to play Champion in this story. Following a similar story, the film details everything that happened in the build-up to Aintree, and the victory itself, giving fans a real insight into what happened at the time and how big the support was for Champion and Aldaniti on the day.