Forty-one runners went to post for the 1983 Grand National, this was the last time we would see a figure that high, as from 1984, the maximum limit for the race was set at 40. It was a slog, too, with the ground officially described as soft, though it was definitely on the heavy side of that, and conditions took their toll.

Corbiere was the horse to come out on top, at one point, it looked as though he would win with ease, but a late challenge saw him win by just three-quarters of a length. He won the race for trainer Jenny Pitman, being her first of two wins in the race as a trainer. Ben de Haan rode the horse to victory, his third attempt at the race, and what would be his only winner in it.

1982 Grand National winner, Grittar, was sent off as favourite for the race, looking to win back-to-back titles, but he could only finish 5th here.

What Happened In The 1983 Grand National? 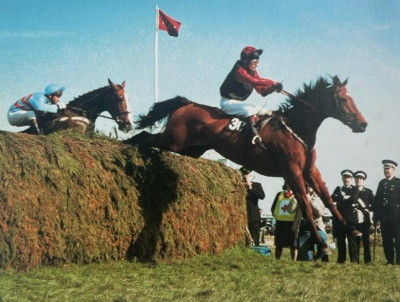 One of the biggest parts of the 1983 Grand National happened on the eve of the race, and the horse involved was not listed as a runner in the race. Ashley House was a long term antepost favourite for the race and fancied by many. However, due to the expected heavy ground, he was withdrawn from the contest at the final declaration stage and left Grittar as favourite on the day, who hadn’t been impressive really but was made favourite because of his win a year earlier.

Paul Barton took the ride on Grittar after John Francombe, who was originally booked, suffered an injury and was ruled out. Barton kept his mount towards the front of the race, and while he was doing well, there were errors along the way, and things weren’t going as well as 12 months before.

Eventually, as the race really got going, Grittar just couldn’t keep up with the pace, the front four went clear and left Grittar to finish a remote fifth place behind them, respectable but never really challenging.

Corbiere had plenty of supporters before the race, having a strong build-up before heading to Aintree. He started off by winning over a similar distance when coming home first in the Welsh National in December, four months before the Grand National. He then went on to win a nice staying handicap at Doncaster, further enhancing his credentials.

Before Aintree, he went to the Cheltenham Festival and finished second in a nice race, and he was all set to come here and run very well. From the very start, jockey Ben de Haan had him in front rank, away from trouble, and he stayed there throughout. Two flights out, Corbiere took a clear lead and looked as though he was going to keep going clear and win this race with ease, but on the run in, things became tight.

Greasepaint was the horse chasing them down, getting closer and from the elbow to the finish line, these two had a real battle for the win. It was Corbiere that managed to hang on, keeping clear, and while he wasn’t as impressive as he looked like he could be at one point, he still took the race.

The second placed Greasepaint ran a great race to run this close but ultimately couldn’t get involved. He was the big Irish hope for the race, priced up at 14/1 after winning the Kim Muir handicap chase at the Cheltenham Festival a month earlier. The run was almost timed to perfection, but things just fell short, and in the end, he was just unable to get up and win the race.

Corbiere would go on to run in the Grand National a total of five times, with this being his only win, although he would place in two further races in the future.

The 1983 Grand National saw 41 runners go to post, a very healthy field despite the bad ground that this was ran on, enough for Ashley House, favourite for the race, to be withdrawn. However, this would be the last time that more than 40 runners would go to post for the race, with one of the early safety measures being implemented after this year.

A maximum field size was added to the race from 1984 onwards, which would only allow a maximum of 40 runners to take part in the race. This was in place to prevent issues such as fallers causing multiple other runners to come down and the general chaos that we have seen over the years within the race.

Safety was becoming something that was slowly starting to be talked about at this point. Of course, everyone knows the Grand National is a tough race and takes a lot of winning, but safety was at the centre of this decision.