We saw a big shock in the 1985 Grand National, with the 50/1 shot Last Suspect taking the race. Trained by Tim Forster, who was having a hugely respectable third winner in the Grand National, and ridden by Hywel Davies, the horse came away to win by one and a half lengths from Mr Snugfit in second place.

Three fancied runners took the places, while one of the joint-favourites, West Tip, was a faller when in contention at Becher’s Brook, so this was a race that could have gone badly for the bookmakers, but Last Suspect came to their rescue.

At 11 years old, the winner was having his first run in the race, and both his age and lack of experience over the fences certainly played a part in his price on the day. That didn’t stop him from winning, though, landing his first, his jockey’s first, and a third for trainer Tim Forster.

What Happened In The 1985 Grand National?

The 1985 Grand National was run on good to soft ground, but there was a strong pace to the race, which made this a very difficult test for some. Just 11 runners managed to complete the course, with 29 bowing out for various reasons, though many were pulled up, simply unable to last the distance.

Two horses were sent off as the joint-favourites here, with the public unable to split them. The first was Greasepaint, a horse who had finished second in the race in both 1983 and 1984. As a 10-year-old, he was still in his prime, has plenty of course experience thanks to those two runs, and this was seen as his year by punters who backed him.

Elsewhere, West Tip was the other big fancy for Michael Oliver and Richard Dunwoody. He was the talking horse, despite no experience in the race for either horse or jockey, so much so that the pair appeared on BBC tv in the build-up to the contest, talking about their journeys and hopes for the race. 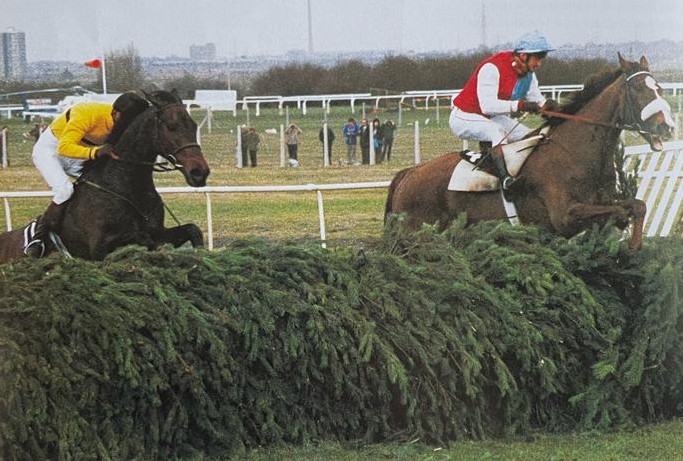 The horse had a perfect build-up, winning four staying races in earlier in the season before arriving at Aintree. The last of those was the Ritz Club National Hunt Handicap Chase at the Cheltenham Festival, a hugely competitive race which put the horse spot on and further enhanced his credentials with those looking in the form book.

Drumlargen, third in the 1984 Cheltenham Gold Cup, and Corbiere, winner of the Grand National in 1983 and third placed in 1984, were two other strongly fancied runners in a lively betting heat that had plenty of opinions around it.

John Burke, who won the Grand National in 1976, had announced before the race that he would be retiring after the race, and he was on Lucky Vane. He ran well in 1984 and won a four-mile handicap at Cheltenham in January, so there were no doubts about his staying power ahead of this one. Could he give Burke the fairy tale send-off that many wanted?

Hallo Dandy, a winner in 1984, was another in the field with a good chance, plenty of punters stuck with him after seeing his success at Aintree.

In the race itself, those who had stuck with Hallo Dandy were dealt an early blow, as he was one of the horses that departed at the very first fence, ending his hopes of a repeat. The other main contenders reached the end of the first circuit, with the exception of Lucky Vane, who broke down after jumping Valentine’s.

The race was bubbling up nicely, plenty were involved, but the one really catching the eye was West Tip. Young jockey Richard Dunwoody was cruising on his mount, there was nothing else going better in the field, but of course, there was some way to go.

Corbiere was leading, with West Tip making his challenge as they reached Becher’s Brook on the second circuit, where disaster struck for West Tip. He crumbled on landing and fell, ending his hopes of winning the race and those who had backed him. There was no doubt he would have gone on to go close, given he was still comfortably travelling as the best in the field.

With three fences to go, Corbiere was the one in control of the race, leading by two lengths, but it was here where Mr Snugfit made his move, and he took up the lead. He remained there jumping the last, with plenty of horses in behind labouring and struggling to make an impact.

It was Mr Snugfit’s race to lose, but dramatically on the run-in, that is exactly what he did. The big weight on his back began to take its toll, he was tiring and running on empty by the time the runners reached the elbow on the home straight.

Corbiere came back, and so did Last Suspect, neither were going great but were doing much better than Mr Snugfit, who was really struggling. It was Last Suspect that dug deep to find the most, and in the final 100 yards, found something to run on strongly, and take the race. Mr Snugfit held off Corbiere in the end, those two finished second and third, while Greasepaint would come home in fourth.

A race full of big names, who were all fancied, and it certainly delivered. Mr Snugfit looked the winner at the final fence, but Aintree is unforgiving, and Last Suspect was the one that stayed on best of all to come and claim the race under the jockeyship of Hywel Davies.

The way in which Last Suspect dug deep was a great credit to the horse, and he certainly received praise after the race, as did jockey Hywel Davies. However, it was another man, trainer Tim Forster, that took most of the plaudits immediately afterwards.

This was the trainer’s third Grand National win, following on from Well To Do in 1972 and Ben Nevis in 1980. Winning the Grand National is seen by many as a once-in-a-lifetime opportunity, but for Forster, this was now something he had done on three occasions.

His first winner, Well To Do, was fancied at 14/1, but Ben Nevis won the race at 40/1, and Last Suspect won the race at 50/1, both big outsiders. In total, Forster would only saddle a total of 14 runners in the Grand National, and just five of those would complete the course.

Anyone who backed West Tip to win the 1985 Grand National will remember the way in which he was travelling and how he was going through the race just before he fell at Becher’s Brook on the second circuit.

The race was just getting going, a few were struggling, some were travelling ok, and West Tip was cruising throughout. He moved forward to contest the lead at Becher’s Brook but ultimately fell after crumbling on landing, much to the disappointment of those who had backed him.

There are many hard luck stories in a race like the Grand National, often multiple in a single race, but the way in which West Tip was travelling here made his one of the most memorable. Later in his career, he would go on to gain compensation for this fall and have an excellent Grand National career, a legend of the race, but his first attempt proved to be the one that got away.