The 1992 Grand National could well be the race that has the most fitting winner in terms of the name of the horse. Anyone who looks back will see the name Party Politics as the winner, but that doesn’t tell the whole story.

Thousands of punters backed this horse because of his name, with the 1992 race coming just five days before the UK General Election, tying in the politics theme and the political name for the horse. Not only that, but fancied runners filled the first five places, this was certainly a race for the punters, as many bookmakers were quick to detail afterwards.

The race was run with a full field of 40 contenders, and 22 of them managed to complete the course, a high number, helped by the excellent spring conditions on the day, easing the test on those taking part

What Happened In The 1992 Grand National? 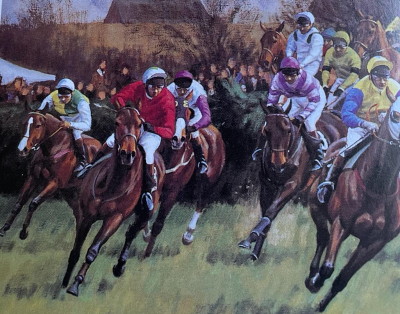 Party Politics stayed on strongly up the run-in to claim the 1992 Grand National. He was trained by Nick Gasalee, the only Grand National winner that he would train from nine runners in the race, four of which were Party Politics across different years.

The horse was ridden by Carl Llewellyn, his first win in the race on just his third attempt, and he would go on to win the race later in life in 1998 when he rode Earth Summit to victory. It was a win that propelled Llewellyn’s career forward, he would go on to have a lot of success at a high level and was certainly noticed more after this win.

In terms of the race itself, the conditions meant that this wasn’t the toughest Grand National test we’ve ever seen, and you can tell that by seeing that 22 of the 40 runners completed the course. Towards the end of the race, though, it was a staying test, and no one climbed up the run in as good as Party Politics did. He was excellent, finishing strongly after already running four miles, and despite their best efforts, those in behind simply could not peg him back.

The eventual winning distance was two and a half lengths, and Party Politics was returned with an SP of 14/1. In second, Romany King ran a great race but just couldn’t stay as strongly as the leader in the closing stages, he was 16/1, while the third, fourth and fifth returned 12/1, 15/2 and 9/1, respectively.

Docklands Express was sent off the favourite, even though he fell at the first fence 12 months earlier. Since then, he’d won the Racing Post Chase, a traditional Grand National trial, and also finished third in the Cheltenham Gold Cup, so he was seen as a horse on an upward curve. He was in with a chance but faded badly towards the end and ultimately finished 25 lengths behind the winner, back in fourth place.

Although seen as one of the biggest sporting events in the entire UK, across any sport, the race in 1992 had a slightly later start time due to a clash with another event. The Boat Race was on the same day, and with BBC wanting to cover both live as part of their Grandstand show on Saturday afternoon, the Grand National was pushed back to 4 pm to enable strong coverage of both events, before, during and after.

Timely Named Success Ahead Of Big Political Moment In The UK

When talking about the Grand National, you have to look at more than just a horse race and the form of those taking part. This is a race where many people bet that they don’t regularly watch horse racing, and for that reason, they will look to find other angles.

Those doing so in 1992 would have been well rewarded had they chosen to go down the political route. At the time, political news wasn’t wall-to-wall, but specifically, when the Grand National was run that year, it was all everyone was talking about. Just five days after, the UK General Election was going to take place, so a lot of the talk at that time was around politicians and political parties.

Given that, it was no surprise to see Party Politics well backed on the day, receiving a great applause when he returned victorious after the race. A winning SP of 14/1 was returned, big enough to hit the bookmakers, mainly from those who thought it would be wise to go with a very topical name on the day.