The 1997 Grand National, the Monday National, the Bomb National, however you want to refer to it as, it is fair to say that the race in 1997 will go down as being the one everyone remembers or reads up about.

A race overshadowed by a bomb scare on Saturday, transferred to the Monday, and not without drama on that day too. Don’t let all of this take away from the winner though, Lord Gyllene took the race by 25 lengths when it was run on the Monday, a stunning performance to win in great style, just what we all needed to focus our minds back on the racing.

It was expected that around 10,000 people would turn out on Monday to watch the race run, but over 20,00 was the official attendance, as people wanted to show support and solidarity, coming out despite fears of something else similar happening again

What Happened In The 1997 Grand National?

Let’s focus solely on the race itself first and give the winner the credit he deserves. Starting off, Lord Gyllene was actually a New Zealand bred runner, something we rarely see over jumps, especially in races such as this one, which gave him his own unique quirk.

Trained by Steve Brookshaw and ridden by Tony Dobbin, the horse was sent off at 14/1 on the day, bigger than many would have expected in the week leading up to the race. At that point, he was ante-post favourite for the contest, but drifted on the day, mainly due to support for other runners, rather than anything negative about his own chances.

17 of the 36 runners completed the course to finish, in a race that was run at a strong tempo, aided by the good conditions both on the day and in the build-up. Go Ballistic was sent off as the 7/1 favourite and fancied for two main reasons. He finished fourth in the Cheltenham Gold Cup, just three weeks prior to the race, and had the assistance of 1996 winning rider Mick Fitzgerald on his back, which drew punters in.

Suny Bay was another horse fancied on the day, he won the Grand National Trial race at Haydock in February before coming to Aintree, he ran well but faded and finished second in the end, unable to keep up with Lord Gyllene, who kept pulling clear. In behind, things were much closer, as the second, third and fourth were separated by just over five lengths.

Sadly, there were two equine fatalities reported after the race. 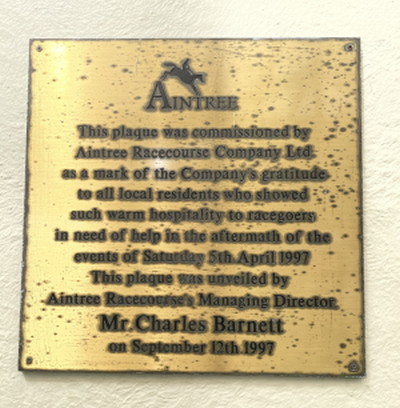 Of course, the 1997 Grand National will forever be talked about due to the bomb threat that was made ahead of the original race day, Saturday 5th of April, which caused the postponement of the race. In the build-up to the 1997 General Election, the IRA made a number of bomb threats, and this was one of those.

The race was due to go off at 3:45 pm on Saturday, with the first bomb threat being recorded as received at 2:49 pm, less than an hour before the start time, so firmly with everyone either ready or on the verge of being ready for the race. This was sent to the Aintree University Hospital and made via telephone. A second threat was made soon after, this time this was sent into the police control room in Bootle, close to the racecourse. This was also sent via telephone and recorded at 2:52 pm. Both threats were taken seriously, mainly due to the fact that they used codewords familiar with use in the IRA, which made them seem very credible.

At this point, the decision to evacuate was taken, with police evacuating 60,000 people from the racecourse. Of these, 20,000 people were left stranded, including racegoers, media, and those connected to the horses and people taking part in the race. Initially, people were evacuated onto the course itself, but that was quickly realised as a bad idea, so people were told to leave the course completely.

At 4:14 pm, with everyone away from the racecourse and the threat still in place, the police made two controlled explosions within the grounds of Aintree racecourse.

The competing horses on the day were either taken home, transferred to nearby Haydock racecourse, or for a dozen of them, left inside Aintree racecourse until the rescheduled Monday race.

Although not officially confirmed at the time, since the race took place on Monday in 1997, it has been learnt that a bomb hoax was also called in on the rescheduled Monday. At the time, Merseyside Police believed this to be a hoax and were confident enough to let the event continue as planned, and not inform the public or make any delays.

Sir Paul Stephenson, formerly of Merseyside Police, has since gone on record to say that he believes there was never a bomb planted within Aintree Racecourse on either day and that both were hoax calls, though the one on Saturday was far more credible than the Monday hoax.

Unfortunately, the Saturday bomb scare overshadowed something else about the race and that was the retirement of BBC horse racing commentator Peter O’Sullevan. He first called the Grand National in 1946, and either on TV or radio had called every race since then up until this one in 1997.