The 2000 Grand National went to a father and son team from Ireland. Ted Walsh trained the winner Papillon, while the horse was ridden by his son, Ruby Walsh.

Not only that, but the 2000 race was a first ride in the contest for Ruby, he was one of five to make his race debut this year. Just like we saw a year earlier in 1999, we witnessed a dad doing the training and a son doing the riding, and their partnerships both resulted in success on the day, and the perfect family story for everyone to enjoy.

What Happened In The 2000 Grand National?

40 runners went to post for the 2000 Grand National, and 17 of them finished the course, a healthy number, and helped by good racing conditions. The winner Papillon was fancied in the market by many and was eventually sent off at 10/1, which made him one of the 10/1 joint-second favourites behind the 9/1 market leader Dark Stranger.

That horse, unfortunately, fell at just the third fence, giving jockey Tony McCoy a heavy fall, and ending the hopes for many who had sided with him, mainly because McCoy was in the saddle. Star Traveller was the other 10/1 joint-second favourite, and he led for most of the way before being pulled up at fence 25, where he was found to have gone lame.

Mely Moss, a 25/1 chance, was the horse to challenge Papillon, and we had a great finish between the pair. There wasn’t too much in them at the line, the official winning distance was one and a quarter lengths. A further 12 lengths back was Niki Dee, another 25/1 shot, while Brave Highlander finished fourth at 50/1 of the 17 runners that navigated the Aintree course in this one.

Just like a year earlier in the 1999 race, we saw another father and son duo win the race. From the Carberry’s, it was now the Walsh’s, with Ted Walsh training the winner and his son Ruby riding the winner.

In the build-up, Ted strongly fancied his horse and felt he was the ideal partner for his son to ride in the race, something that was proved right on the day. 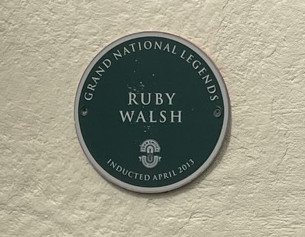 Not only did Ruby Walsh get the joy of riding the winner for his dad, but he also rode the winner of the race in his very first attempt. Five riders made their debut in the 2000 Grand National, with four out of the five finishing the course including Walsh. Jockey Jimmy McCarthy was the only one to not finish.