A wide-open gambling heat and a race where many held credible chances is how many people will remember the 2004 Grand National. Those on Hedgehunter will probably see themselves as being unlucky, given he fell at the final fence when in contention.

The winner was Amberleigh House, ridden by Graham Lee and trained by Ginger McCain. The likeable trainer landed his fourth Grand National title here, his final win in the race too. You have to go back 31 years to find his first, which came with arguably the greatest Grand National horse of all time, Red Rum.

In terms of the betting heat, four horses shared favouritism, almost unheard of, and were all priced up at 10/1. Bindaree, was one of those, winners of the Welsh National and a horse with experience on the course, after beating another of the favourites, Clan Royal, in the Becher Chase. Jurancon II was well backed after being chosen by champion jockey AP McCoy, while the final horse going off at 10/1 was Joss Naylor, after a strong showing in the Hennessy Gold Cup at Newbury earlier in the season.

What Happened In The 2004 Grand National?

The ground on the day was officially described as good, perfect spring jumping ground for the contest. 39 of the field set off from a possible 40, with Tyneandthymeagain being withdrawn from the race beforehand, at a stage that was too late for a replacement to be added.

The race itself was a thriller, and plenty of people will have been watching at home and being excited about their chances. At the final fence, four horses were up close and in with a chance of winning. They included one of the favourites Clan Royal, the popular Hedgehunter, eventual winner Amberleigh House and outsider Lord Atterbury.

It was here where it all came to an end for Hedgehunter, who fell at the race and left Clan Royal and Lord Atterbury ahead of Amberleigh House. However, just when he needed to be straight, Clan Royal began to wonder, and Amberleigh House stayed on stronger to come up past him and take the race by a winning distance of three lengths. Lord Atterbury was a further two lengths behind in third, with a big gap to the remaining finishers.

A total of 11 horses completed the contest from 39 who started, and all horses were reported to be back in the stables safely after the race.

What May Have Been For Hedgehunter

We’ve had many unlucky fallers in the Grand National before, but not too many at the final fence, when still in contention to win the race. That was the fate for Hedgehunter, and those who backed him will be left wondering, what if?

There are no guarantees in racing of course, but he would certainly have been in the frame and held a strong chance of being the winner of the race. However, as we know, the Grand National fences are not easy, and you need to jump them all to win the contest, something that Hedgehunter ultimately failed to do.

Another National For Ginger 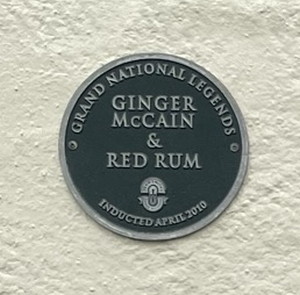 The name Ginger McCain is etched into Grand National history forever, thanks to the exploits of Red Rum. Amberleigh House gave him his fourth, and what would ultimately be his last win in the race. This is a contest that everyone in racing dreams about winning, whether they train, ride or own horses.

McCain was lucky enough to land his fourth with Amberleigh House, a popular winner in the world of horse racing.