Without a doubt, one of the biggest names associated with the Grand National. Donald “Ginger” McCain was a racehorse trainer for over 40 years and was a man who loved the Grand National and had great success in it. McCain won the race a total of four times, three with Red Rum and lastly with Amberleigh House.

Born on September 21st, 1930, McCain’s first ever runner in the race was when Red Rum won his first National. If you want to get a feel for how much he loved the race and, more importantly, how much the race loved him, a bronze statue of Ginger McCain was installed months after his death and unveiled at Aintree Racecourse on the opening day of the 2012 Grand National meeting.

The statue overlooks the winning line, so McCain can see where his big victories all took place. The legend of Red Rum continues to be a big part of the Grand National, and by association as his trainer, so does the legend of Ginger McCain. 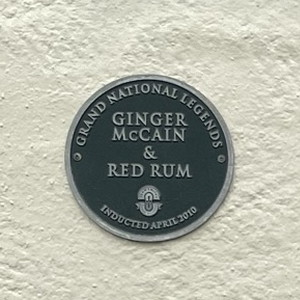 Before the 1973 Grand National, Ginger McCain hadn’t really had success on the big stage, and the legend of Red Rum was undoubtedly nothing that racing fans spoke of. However, the race in 1973 would change both of those things.

This was a dramatic victory and a race that has been played back many times over the years. The win showed the character and determination of Red Rum and jockey Brian Fletcher. They were 15 lengths behind at the final fence and seemingly set for second place at best. However, the horse never stopped, wearing down Crisp in the closing stages and going on to win by three-quarters of a length.

Crisp has 12 stone on his back, Red Rum just ten stone 5lb, and that is what told up the run-in. In winning the race, Red Rum broke the Grand National record time, with nine minutes and 1.9 seconds to complete the course. This record would go on to stand until 1990, which shows how impressive it was on the day.

Both horses that played out the finish were sent off as the two 9/1 joint-favourites, proving the bookmakers and punters got the betting market. It was very much a matchup between the horse that had been there and done a lot in the racing world, with a big weight on his back, against a young up-and-coming runner, with a low weight but plenty of potential.

It was the youngster that came out on top in a race that will be remembered because it was the start of Red Rum’s legacy, but also because it was a thrilling contest with a great finish.

Lastly, when you think back to 1973, one final story sticks out. Dual Cheltenham Gold Cup winner L’Escargot was beaten by just under 26 lengths back in third and finished third in the race. However, when the race began, he was left at the start and was 25 lengths adrift of the field when he finally got going. His story is undoubtedly a case of what might have been, sometimes lost because the winner was Red Rum, and it was his first of three wins. 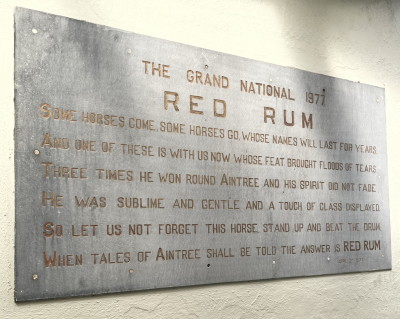 At the time, no one knew it, but the 1973 Grand National victory would be the start of Red Rum’s dynasty. During this period, he dominated everything about the Grand National, dragging his trainer into the spotlight.

He would go on to win back-to-back Grand Nationals a year later in 1974, with a lot more weight on his back after the win in 73. Carrying 22lb more in this contest, but that wasn’t enough to stop him, and he got the better of L’Escargot, who would finish second in this contest, behind Red Rum again just like a year earlier.

Sent off at third favourite at 11/1, there were some people who thought the weight on his back would be too much for Red Rum. This seemed clear when you factor in the run of L’Escargot from a year earlier after he was left at the start, but Red Rum dug deep and showed the same kind of determination and grit as he did to win his first.

At this point, the names Red Rum and Ginger McCain were cemented into Grand National history forever, not just recording two wins but recording back-to-back wins. However, the pair were not done yet.

In 1975, Red Rum was 7/2 favourite when going for his third win in a row. However, this time his big weight did tell, and the horse could only finish second. Big rival, and unlucky horse from 1973, L’Escargot was the winner of the race, beating Red Rum by 15 lengths to get a deserved win in the race.

A year later, Red Rum was back for his fourth Grand National, and in 1976, second place was where he would finish again. Rag Trade was the winner here, winning for trainer Fred Rimell, who was winning the race for a record fourth time. This was a record that Ginger McCain would eventually equal, and Red Rum would account for three because there was one big run left in the legendary horse.

This would come in the 1977 race, where Red Rum would win his 3rd Grand National title, a record that no other horse has been able to match since then. Sent off as the 9/1 joint-favourite, with a little less weight on his back, Red Rum was able to roll back the years and go better than his two second place finishers over the past two years.

It was a big, impressive win, too, that allowed jockey Tommy Stack and everyone in attendance at Aintree the chance to celebrate this great feat. The cheers in the crowd were something special, and given the noise, every single person inside the racecourse had backed Red Rum and understood they were witnessing something very special in sport, not just horse racing.

This was the final time we would see Red Rum in the Grand National, rounding off a feat that still hasn’t been matched and a Grand National record that will probably never be matched. He ran five times in the race, bagging three victories and finishing second in the other two appearances.

Reaching the race five times is an incredible achievement, winning it three times is on a different level, and to top it all off, finishing second and battling in the other two gives Red Rum legendary status in the world of racing.

Amberleigh House Rolls Back The Years

After Red Rum, Ginger McCain tried to win the big race again but did not have much luck. The best he could do before Amberleigh House came onto the scene was finish 14th. Most of his runners during the period in between his two big runners ended with a fall.

However, things would take a turn with Amberleigh House, bringing back some luck in the race for Ginger McCain and rolling back the years for his supporters. After a strong run in 2003, where Amberleigh House would finish third, the 2004 Grand National saw him get his trainer back in the winner’s enclosure.

Ginger McCain was back in the big time, and Amberleigh House was a great winner of the race, coming from behind in a similar fashion to Red Rum when he won his first. The ending and gap closed wasn’t as big as that we saw from Red Rum, but the drama was certainly as strong.

Going to the final fence, four horses were in contention for winning the race, and Amberleigh House jumped the fence last of those four. However, he began to move through the field on the run-in and was quickly second behind Clan Royal. Then, the leader began to tire and wander around the track, giving Amberleigh House the chance he needed to get on top. By keeping on a straight line, Graham Lee was able to get his mount ahead of his rival and to the line first, winning by three lengths.

Amberleigh House would come back another two times to try and win the race again but wasn’t able to repeat. A couple of other chances would round off Ginger McCain’s Grand National portfolio. Still, he was unable to bag another victory and ended with four to his name, equalling the record to this day.

Watching His Son Win The Race He Loved

Ginger McCain loved the Grand National, and throughout his training career, this was the race that kept pulling him back, he was always looking for a National horse. Winning the race was, of course, special, but second best to that was what came later in life. That was watching his son, Donald McCain Jr, winning the race.

This came in 2011, just a year before Ginger McCain sadly passed away, but you can only imagine the joy he would have felt watching his son land the big one. McCain Jr won the 2011 contest with Ballabriggs, a typical McCain Grand National runner, showing that he had learnt from his father and also took the race to his heart just like he did.

Thanks to this success, it’s not just Ginger McCain that is associated with the Grand National, but it is the entire McCain family name, with father and son winners of the race. 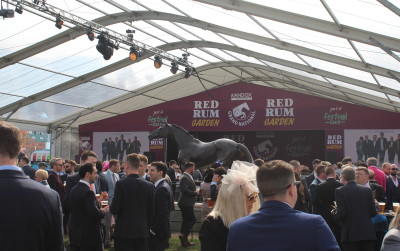 Both Ginger McCain and Red Rum have a long-standing connection with Aintree racecourse and are remembered at the track.

For McCain, he has a statue overlooking the finishing line, looking down at the place that gave him his biggest victories and highlights of his career. Given the quality of racing at Aintree and the legends that have been linked to races at the track, it shows the kind of legacy McCain left, on the course and the Grand National, by the fact that he has this statue in place.

As for his most famous horse, Red Rum, he is buried at the winning post on Aintree Racecourse, with a memorial for fans to go and pay their respects, which many do every year. Red Rum died in 1995, and the decision was quickly made to bury the horse at the track, the home of his biggest days and where he made himself into a household name.

During the early 1970s, there was a lot of talk about whether the Grand National would survive as a race. Public interest was slowly dwindling, and with a number of accidents and injuries, things were not getting any better. The race needed a good story, and McCain was part of delivering that with his beloved Red Rum.

Here are some of the bigger names trained by Ginger McCain during his career.