Toby Balding, officially known as Gerald Barnard Bolding Jr, was a racehorse trainer in the UK. He was born in the USA but moved to the UK in 1945 when he was just nine years old.

Toby is part of a racing family with strong traditions, the Balding name has seen much success both in the national hunt sphere and also on the flat racing calendar. Toby has always been the leader when it comes to national hunt racing, though and is one of just a few trainers to win the ‘big three’ in racing. He’s won the Grand National (twice), the Champion Hurdle (twice), and also the Cheltenham Gold Cup.

He began training horses in 1956, sending out winners in both codes of the sport. He retired in 2004, the final day of the flat season, and when he did, he had trained over 2000 winners. 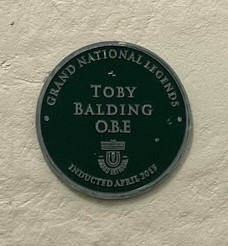 In 1969, Toby Balding celebrated his first Grand National success when Highland Wedding crossed the line in first place at Aintree. He was a 12-year-old, just like Little Polveir, Balding’s other winner, so there is certainly something in his training ability that brings out the best in older horses and keeps them going for a little longer.

14 of the 30 runners finished the race, one that was run on firm ground. Jockey Eddie Harty Sr was the man on board, and the pair of them won the race in impressive fashion by 12 lengths, clear of the field.

This was the third Grand National attempt for Highland Wedding, who had completed the course on his previous two tries but was unable to get involved at the finish. He was 8th in 1966 and 7th in 1968, prior to winning this.

Highland Wedding was returned with an SP of 100/9 on the day.

Balding began training in 1956, slowly starting with limited success. Despite being 13 years later, given the length of his racing career, it is still fair to say that this was a success during the early part of Balding’s training career and something he used as a springboard to further success.

The remaining big race victories of his career came at the end of the 80s and into the early 90s. Hence, it was a while before we saw Balding in the winner’s enclosure at big events regularly, but they would eventually come for him.

After winning the Grand National in 1969, Toby Balding had to wait another 20 years before he was back in the winner’s enclosure. Winning two big races, so far apart, is a testament to his longevity in the sport and his ability to train top-quality horses.

This time around, he trained the 12-year-old Little Polveir to victory in what was a fourth attempt at the race for this animal. Crucially, as some would say, it was the first time he went to the race under the stewardship of Balding, as the horse moved to him prior to the National.

Balding put Jimmy Frost on the horse, who was having his first ride in the Grand National, and that proved to be a masterstroke, as, despite the big occasion, Frost was exceptional, making a race-winning move on the first circuit and meaning his horse was never headed.

This was a horse who had previously completed one Grand National and won a Scottish Grand National, so there were no issues around the distance being too far. The ground was also in his favour, heavy, which is precisely how he liked it. Frost made this a real stamina test, get the horse into a great rhythm out in front, and never saw another rival.

From the 21st fence onwards, due to a faller, Little Polveir was three lengths clear, and all the way to the finishing line, he had a lead of that or more over his nearest rivals. West Tip tied to stage a late attempt, but he was unable to reel in Little Polveir, who was relishing the conditions and went on to win by seven lengths.

As a 12-year-old, Little Polveir was at the end of his career, but the move to Balding’s yard clearly revitalised him, and his trainer deserves a tremendous amount of praise for his success.

The biggest three races in national hunt racing are the Grand National, Cheltenham Gold Cup and Champion Hurdle. They are the toughest to win, and yes, some trainers dominate and win them all, but the fact they win many other races shouldn’t take away from the fact of just how hard it is to win all three during a career.

Toby Balding is one of the trainers that have accomplished this feat and deserves a tremendous amount of respect for it. Training methods are excellent, but it is still not easy to be able to train a two-mile hurdler on speed and a four-mile chaser on staying power, this is very varied.

With 2000 winners on the board, Balding indeed showed his staying power, and he had a remarkable ability to do it across every level and type of racing. Winning the big three shows that right at the top of the game, he could still have success.

Many will know the Balding name, and it is fair to say that they have had a big impact on the world of racing over the years. Toby was a leading light for them in the world of national hunt racing, while much of the other success they have had has been with flat racing.

This began with Toby’s brother, Ian Balding, who was more known for flat racing but was also a person that had success at the highest level. In 1971, Ian trained Mill Reef to win the Epsom Derby, as well as a host of other big races during his career, but the Derby was undoubtedly his highlight.

Flat racing trainer Andrew Balding is his nephew, following on the Balding family tradition of training horses, and he’s a trainer that has had Group 1 success, including at Classic level, with horses over the years. Finally, Claire Balding, a racing presenter, is the niece of Toby Balding and is another to keep the Balding name in racing’s spotlight.

After his excellent career, Toby Balding has been recognised for his work within the racing industry. In 2006, he was elected as an honorary member of the Jockey Club, one of the biggest organisations in racing. During a period of this, he was also a director for the British Horse Racing Authority, the governing body of the sport.

In 2011, Balding received an OBE for his services to horse racing in the Queen’s honours list.

This was three years before Balding sadly passed away in 2014, two days after his 78th birthday.

Here are some of the bigger names trained by Toby Balding during his career.