Oliver Sherwood never had many runners in the Grand National despite a long training career. However, he will be associated with one of the best Grand National winners and most loved horses we have seen in racing, and that is Many Clouds, who won the 2015 Grand National.

Born on May 25th, 1955, Sherwood has been in racing for many years. This all began at a young age, where he watched both parents be successful point to point jockeys. Later in life, his brother was a successful jockey, Simon Sherwood won the Cheltenham Gold Cup on Desert Orchid in 1989.

However, for Oliver, it was all about training, something he began in 1984, going on to have hundreds of winners and carve out a name for himself, even if he never managed quite to reach the top of a game 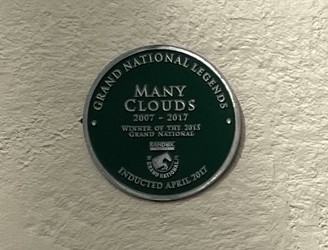 Some trainers have their career dominated by one horse, and when it comes to the Grand National and a horse that people loved, for Oliver Sherwood, that horse is certainly Many Clouds.

As mentioned, Sherwood hasn’t a long history of runners in the Grand National, and prior to Many Clouds running in the contest, he had just five previous runners in the race. Every single one of those had something in common, they had not managed to finish the race, so Sherwood, before Many Clouds, hadn’t even had one horse complete the course.

He went from that to winning the contest with a hugely popular horse. After winning the Hennessy Gold Cup, Many Clouds was already on his way to stardom, and the Grand National took him to that level. Coming home strongly, showing the staying power that many believed he had, Many Clouds won the race by just under two lengths and at a starting price of 25/1.

He returned to the race in 2016 in a bid to try and win the race again but could only finish 16th in the race. Many Clouds would go on to win a dramatic Cotswold Chase at Cheltenham, beating Thistlecrack, who was seen as almost unbeatable at the time. Unfortunately, after the line, Many Clouds collapsed and died, he put everything into that performance and will be remembered as a horse who certainly wore his heart on his sleeve.

Here are some of the bigger names trained by Oliver Sherwood during his career.