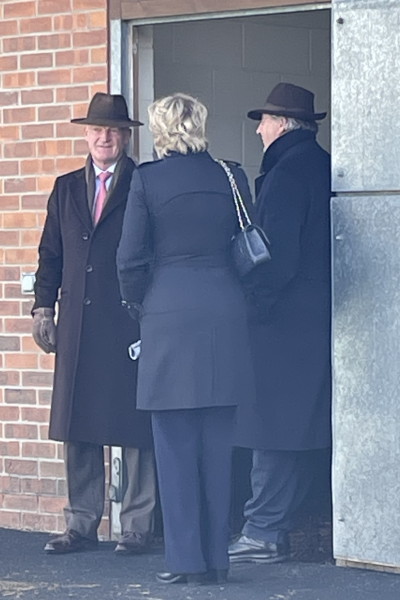 When you think of Irish racing, one of the first people you will think of is Willie Mullins. A superstar trainer with a huge legacy behind him and the man responsible for training some of the very best horses that we have seen on the track, either in the UK or Ireland.

Born on September 15th, 1956, Mullins is part of a huge racing family, with various other members taking their own route in the industry. However, in terms of success, Willie is the one that has really been able to fly the flag.

When we have a big graded race in Ireland or a festival in the UK, it is highly likely that Mullins will be seen with a runner, sometimes multiple. He thrives on the big stage, and his 2005 Grand National win with Hedgehunter was one of many visits to the winner’s enclosure on those days.

While Mullins had tasted success on the big stage prior to the win of Hedgehunter, at the time, this was undoubtedly his biggest win. It was a very comfortable success, too, with Ruby Walsh riding out the finish to land a 14-length success, recording his second victory in the race after winning aboard Papillion.

The betting market seemed to know about the dominant performance we were about to witness, with plenty of money for Hedgehunter both in the morning and just before the off. He was sent off as the 7/1 favourite, and those who followed Walsh and Mullins would have known their fate a couple of fences from home, he was going so well.

Clear heading to the last, a good jump was the only thing needed to secure the victory, and Hedgehunter responded to Walsh and delivered a great leap. Up the run in, it was all about keeping him going to the line, he did with ease and went on to win by 14 lengths, much to the delight of Walsh in the saddle, who celebrated in grand style as they crossed the line.

Rain during the week turned the ground good to soft on the day, and that certainly helped the horse, who is known to like a bit of cut in the ground. That delivered him the perfect surface for him to give us a superstar performance.

The way in which Hedgehunter won gave everyone hope that we could see him repeat his success a year later, and he almost did. In 2006, he was back for more and was once again heavily backed to do so, going off as the 5/1 joint-favourite, but he could only finish second behind fellow Irish raider Numbersixvalverde.

Further attempts came in 2007 and 2008, where he finished 9th and 13th, rounding off a remarkable five runs in the race, a feat itself, without the win on his CV. Thanks to both, Hedgehunter will go down as one of the better Grand National runners of his time.

After his victory at Aintree in the Grand National, Willie Mullins moved forward as being one of the very best trainers in the UK & Ireland. That was cemented by his success at the significant events, with the Cheltenham Festival being the one he is best known for.

He is the trainer to have won the most races at the festival, having great success by winning all four Championship races at the meeting, plus many of the others. He’s won the Cheltenham Gold Cup twice with Al Boum Photo in 2019 and 2020, while the Champion Hurdle is a race he has won four times. Hurricane Fly twice, Faugheen and Annie Power the winners of that race for Mullins.

His ability to train mares to success has also been highlighted at the meeting. The great Quevega won the Mares Hurdle at the meeting an incredible six times, while Mullins has also won that race with others, won the Mares Novice Hurdle multiple times, and, of course, had Annie Power win the Champion Hurdle as a mare.

Mullins first won the leading trainer award at the Cheltenham Festival in 2011, and this was the starting point of his Cheltenham dominance. For 12 years after that, up until 2022, he was the top trainer at the meeting on nine occasions. These included a golden festival in 2022 where Mullins landed a record ten wins across the week to not only take the title but to do so in style.

Around the time that Willie Mullins won the 2005 Grand National, Irish racing didn’t really have a dominant figure, and a number of good trainers had success in big races. However, after that, an arms race developed, with Mullins and Gordon Elliott the main two involved, and the money spent by big owners allowed those two, in particular, to move away from the pack.

The likes of Rich Ricci and Gigginstown Stud provided Mullins with a number of expensive recruits that he had success with, amongst other owners in the yard. That gave Mullins the advantage over Elliott, but at this stage, both were well ahead of anyone else training in Ireland.

In September 2016, Gigginstown Stud announced that they would be cutting ties with Willie Mullins and moving their horses elsewhere after a fall out. Many of these not only left Mullins but went to his biggest rival, Gordon Elliott. That pulled the pair closer together, but despite losing those horses, Mullins was still able to win the trainers championship for the 2016/17 season, showcasing his talents.

To many, the loss of so many horses, especially when many moved to his nearest rival, would have been a big blow. However, Mullins simply took it in his stride, showed everyone what a talent he is and had no shortage of owners wanting him to train their runners to keep numbers up and success a constant.

Star Of The Mullins Racing Family

The name Mullins is something that has been associated with Irish racing for many years, and it hasn’t just been one member of the family that has caused that. The Mullins family tree stretches far in terms of people involved with horse racing, and Willie is just one part of that.

Son Patrick is the one most closely associated with him, he is an amateur jockey and one of the stable jockeys to the Willie Mullins team. Patrick rides almost all the bumper horses that Mullins has each year and is a big advantage for the yard when it comes to amateur rider races, as they have one of the best in the business on hand.

Patrick is also assistant trainer to his father, and the expectation is that he will take over the yard when Willie decides to retire from racing.

Elsewhere, Paddy Mullins kicked off the family’s love for racing and passed that down through his children. Alongside Willie, Tom, Tony, Danny, and Emmet have all forged careers out of racing, some time working together while other times doing battle against each other.

Early Career As A Jockey With Cheltenham And Aintree Wins

One aspect of Willie Mullins’ time in racing that some don’t know about is the fact that he started out as a rider before turning his attention to training. He had plenty of success, too, winning the Irish amateur jockey championship a total of six times.

As part of that success, he won the 1983 Foxhunters Chase at the Aintree Grand National meeting when he rode Atha Cliath to victory, giving him his first big Aintree win, many years before he started to train.

During the early part of his training career, Mullins bagged another big winner in the saddle. This came at the Cheltenham Festival in the Champion Bumper. Wither Or Witch won the 1996 Champion Bumper and not only did Mullins train him to success but also rode him in the two flat races he raced in, including the Cheltenham win.

After retiring from riding, he spent time as his father’s assistant and at the Jim Bolger yard. In 1988, Willie Mullins took out his own license and began to train horses, the rest, as they say, is history.

Here are some of the bigger names trained by Willie Mullins during his career.