Their best finish to date was in 2017 where they came 4th. They were ridden by Noel Fehily and trained by Nigel Twiston-Davies.

A real fan favourite over the years, Blaklion has put together an excellent career, competing in big races, winning some of them, and being at the Grand National on four occasions. He was sent off as favourite for the first of those, a race that many fancied him to win, but he was only able to finish fourth.

Foaled in 2009, he began racing with the Nigel Twiston-Davies yard but left to go to Phil Kirby. However, injury meant that he never actually saw the track under Kirby and was then sent to the Dan Skelton team. Both Twiston-Davies and Skelton had him at the Grand National on two occasions, making up his four runs in the race.

A Winner Over The Grand National Fences

While Blaklion wasn’t able to win the Grand National, he has managed to pick up a win over the Grand National fences. This came in the 2017 Becher Handicap Chase, a race over 3m2f, and he won in great style to take the race by nine lengths.

This victory came just months after his first Grand National attempt, when he was sent off as favourite for April 2017’s race. It was part of the perfect set-up ahead of another run in 2018 and gave him further course experience.

Not only was Blaklion able to have success at Aintree over the Grand National fences, but he was also able to get a win at the Cheltenham Festival. This wasn’t a small win either, it came in the Grade One RSA Chase, a big race at the festival for young horses who like staying events.

We often see many winners of this race turn up as potential Gold Cup horses of the future, and while Blaklion didn’t quite reach that, it shows the kind of level you need to be at to win the RSA. He won by half a length from Shaneshill, digging deep and staying on strongly up the run in to take the win. This race was three miles, and the ground was good, so not the ideal test for Blaklion, who wanted it a little tougher but was able to win despite that.

The win will never be taken away from him, though, and as a young chaser, by winning this race, Blaklion was at the top of the pile.

Blaklion began by running in Irish point-to-point races, with four runs, winning the final one of those by 11 lengths. These were all over three miles and big fences, so it was clear at this early point what his career was going to look like further down the line.

He went to Nigel Twiston-Davies, who took him back to the start, and it certainly was a great start to their partnership. The horse ran in two national hunt flat races at the end of the 2014 season, winning both of them. After a summer break, he ran over hurdles, winning his first two starts in this sphere, then going on to land the Grade Two Bristol Novice Hurdle at Cheltenham on his fourth start.

He was third in a Grade One and second in two Grade Two’s during this novice hurdle season, showing he had a ton of potential. Best of all, given his point-to-point experience, and the size of the horse, it was clear that even better was still to come.

Blaklion’s Big Race Wins Up Until 2022 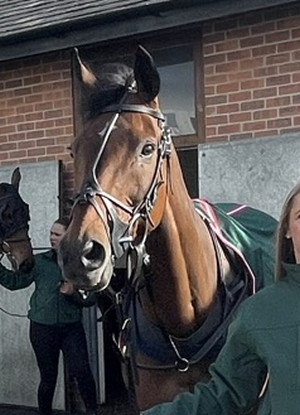 His win in the RSA Chase at the Cheltenham Festival in 2016 stands tall as being the biggest day of Blaklion’s career and the biggest race he has won. However, plenty of other good days also took place during his career, he was an exceptional horse who was able to win at a high level.

The Becher Chase victory over the Grand National fences is another to stand out. This came after he’d finished fourth in the Grand National a few months earlier and was a real statement to show that he was still improving as a horse.

He had an excellent and varied career that saw really good performances across all disciplines and, perhaps more importantly, over a long period of time, displaying his longevity as a racehorse.

Blaklion will be remembered for many years, gaining a lot of public interest over the years, and much of this came from his attempts at the Grand National. A race he didn’t win, but one that saw him take part four times, including placing once when sent off as the 8/1 favourite, supported strongly by punters on the day.