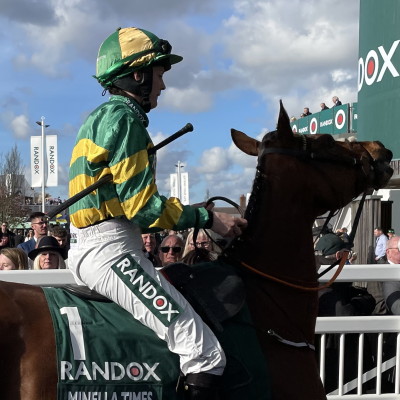 Born on July 11th, 1989, Rachael Blackmore went from a regular race rider to one of the superstars of the weighing room in just a few years. Part of the reason she did that was because of her one and only Grand National win so far, which came in the 2021 Grand National aboard the horse Minella Times.

The victory came on the back of a scintillating four days at the Cheltenham Festival, and for those who didn’t know of her by then, they were left in no uncertain terms of her quality after March and April of 2021.

During that spell, she broke two records that would give her a platform to inspire millions of girls. She became the first female to win the Grand National and did that a month after becoming the first female to be top jockey at the Cheltenham Festival. It is fair to say that her legacy in the sport is already written, and there could be a lot more to come in the future, which could still elevate her to a whole new level.

Many women have tried in the past, but no one else has actually managed to succeed. Katie Walsh, Nina Carberry and other names have been close, but Rachael Blackmore became the first woman to actually win the Grand National when she passed the winning post on Minella Times in the 2021 race.

The win came on the back of a huge Cheltenham Festival, which combined with the fact that some people betting on the race specifically pick out women jockeys means that her mount was very popular. It will be a day she never forgets, a day that many punters won’t forget, and one where she inspired many who have been looking up to her.

Given that she has already won the race, and was the first woman to do so, she is likely to be an incredibly popular Grand National rider for the rest of her career.

Rachael Blackmore rode her first Cheltenham Festival winner in 2019. The horse was A Plus Tard, winning a novice handicap chase by a distance, and she followed that up with a Grade One victory at the same meeting when winning the Albert Bartlett Novice Hurdle on Minella Indo.

On the opening day of the meeting, she rode Honeysuckle to victory in the Champion Hurdle, becoming the first woman to ride the winner of that race in the process, kickstarting a wonderful week. In 2022, Honeysuckle won the same race again under Blackmore, while she rounded off this festival by winning the Gold Cup on A Plus Tard, another first, as she became the first woman to win this race.

Her first professional win came in September 2015. Two years later, in 2017, she had risen through the ranks and became the first woman to win the conditional riders’ championship in Ireland. She went from strength to strength, and the win of Minella Indo in the 2019 Albert Bartlett was the first Grade One success of her career.

A Role Model And Inspiration In Racing

There is no doubt that Rachael Blackmore has already done more for racing than most. She is not only an inspiration for all but especially for women and girls who are looking to get into the sport. They have someone to look up to and watch become a riding sensation.

You only have to look at the accolades she has received away from racing to see the kind of reach she is having, and how many people are taking note of her ability and achievements. At the end of 2021, she won a total of four awards in the UK and Ireland to showcase just what she had done.

She won the Irish Times sportswoman of the year, the Horse Racing Ireland Irish Racing Hero Award, the RTE sportsperson of the year and lastly, the BBC Sports Personality World Sport Star of the Year.

She isn’t done yet, either. With more awards, Grand National rides and Cheltenham Festival hopes still to come, Rachael Blackmore may be able to further her reputation. This seems incredible, given what she has achieved, but she is a highly talented jockey, one who has already shown she rides the Aintree fences well, and the sky really is the limit for her.