Their best finish to date was in 2022 where they came 8th. They were ridden by Sean Flanagan and trained by Gordon Elliott. 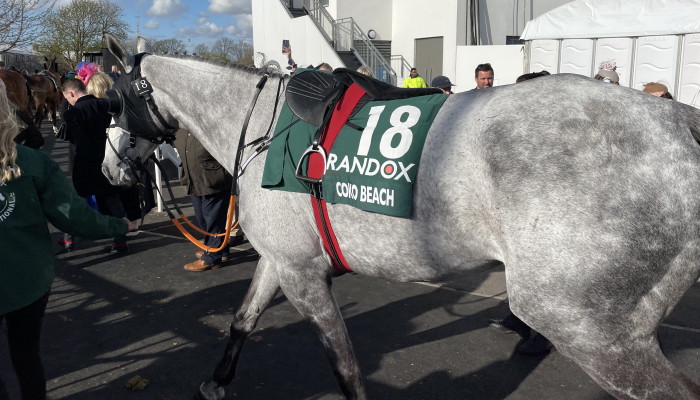 Second, as a youngster over hurdles and two miles at the Cheltenham Festival is not something you’d associate with a Grand National runner. But that’s what Coko Beach has on his CV, showing he’s a very versatile animal who can handle anything.

Foaled in 2015, so far during his career, this horse has been one that has run in some very good races but struggled to get many wins on the board. Trained by Gordon Elliott, his first National attempt was a solid one in 2022, and he’s got plenty of racing left to go better.

The horse is grey in colour, and of course, we know what punters are like with grey runners in the National, so if he ever did win the race, he’d certainly be a popular pick.

This horse began life racing in France before he was bought by the Gigginstown Stud and sent to Ireland, where Gordon Elliott would have the task of training him. His sole French run came in a three-year-old hurdle race, and he won by more than four lengths, impressing enough to complete the sale and his move to Ireland.

Thrown straight into Grade Two company on his first start for Elliott, it was clear that the yard thought this horse was above average, though he didn’t run too well. A couple of runs later and he was sent to the Cheltenham Festival, where he would finish an excellent second in the juvenile handicap race. In this contest, you often have to be incredibly well-handicapped to get in the places.

That showed on his next start, where Coko Beach was moved straight into the Champion 4-Year-Old Hurdle at Punchestown. He came last, but the fact that he was mixing with this standard of runner at an early age was a strong sign for the horse’s future.

The biggest day of Coko Beach’s career came in January 2021, though this was actually in handicap company. He won the Thyestes Chase, a huge race in Ireland and often one that points us towards future Grand National runners.

He didn’t just win the race but came away from the field to take it with ease, recording a winning distance of four lengths and winning at odds of 8/1. A point that further added to this success was the fact that he was still a novice at the time of winning it, something that we don’t see too often, a sign that the horse was maturing well.

A month later, another big race victory came, this time in graded company. In February 2021, Coko Beach won a Grade Two novice chase at Navan, again recording a winning distance of four lengths, this time, he was strongly fancied and was sent off as the 5/4 favourite.

With plenty of racing left in him, those connected with Coko Beach will be hoping that he can add further to these two big wins, with plenty more in the future.