Their best finish to date was in 2021 where they came 7th. They were ridden by Bryan Cooper and trained by Paul Nolan. 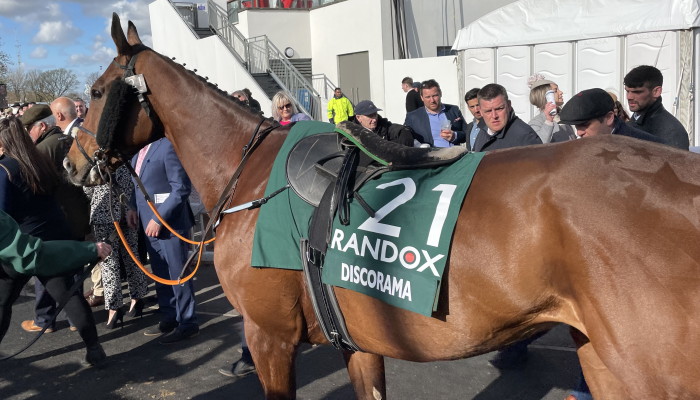 Discorama was trained during his racing career by Paul Nolan in Ireland. He’s run twice in the Grand National, with his best finish coming in 2021 when he was seventh behind Minella Times.

Foaled in 2013, this horse picked up just two wins during his career but was able to compete in some of the biggest and best races on the calendar, including at the Cheltenham Festival and in the Grand National.

Sadly, Discorama died as a nine-year-old after suffering injuries while racing.

Death In The 2022 Grand National

Unfortunately, even after the many advancements and alterations to the Grand National race, this is still a very unforgiving test for jockeys and riders. In 2022, when competing in the race for a second occasion, Discorama was pulled up before the 13th fence by jockey Brian Cooper.

He was found to be lame at this moment, and it was confirmed by his trainer Paul Nolan later that evening that he had died from the injuries sustained in the race. Immediately after the race, it was reported that all horses had returned to the stables with no serious injuries suffered. Still, this news came from Paul Nolan after that report, sadly announcing that Discorama had indeed died due to injuries in the race.

A severe and untreatable pelvic injury was found on the horse after further investigation in the stables on the evening of the race, which then led to the decision to put the horse to sleep. It was a send end to the race that day, hitting a little harder because it followed the news that all horses were fine after the race, which, sadly, wasn’t true.

Discorama made his racing debut in a national hunt flat race at Thurles back in March 2017, and he ran really well to finish second, showing promise for the future. He was sent hurdling straight away the following season and kicked things off with a maiden hurdle win at Fairyhouse.

He continued to run well without winning from that promising start and was upped in class. He was down the field in both Grade Two and Grade One contests at the end of the season, but in between those runs, he was an excellent second at the Cheltenham Festival in the Martin Pipe Hurdle, a traditionally competitive handicap.

Just like when he went hurdling when he went chasing he also won on debut, a solid effort that propelled him into a better class of race. He was thrown straight into Grade One company after that, finishing fifth in the Drinmore Novice Chase at Fairyhouse on just his second start over fences.

He finished his novice chase season with a second in the Champion Novice Chase at Punchestown, his best run to date. However, before that, we also saw a glimpse of his staying abilities, and this come with him finishing second yet again at the Cheltenham Festival.

This time it was the National Hunt Chase, over almost four miles in the distance, he went down by just half a length, and it was clear that staying would be no problem for him in the future.

That wrapped up the novice side of racing for Discorama, he would then go on to run in open company. Still, even in these early days, we had seen both a high level of ability from him and also excellent staying power, which he would use in the future.

Sadly for Discorama, he never managed to win a big race, landing just two wins in his career, both during his novice years. He won on his hurdling debut and chase debut, two minor events, and those were the only wins to his name.

However, it is worth mentioning that the horse finished second at Grade One level at Punchestown, and he also had an excellent Cheltenham Festival record without winning at the big meeting.

At the festival, he ran three times, finishing second, second and third in those contests. He would add two Grand National runs to that, finishing a good seventh behind Minella Times in 2021, one of the better runs he put up in the latter part of his career as a racehorse.