Their best finish to date was in 2022 where they came 11th. They were ridden by Sean Bowen and trained by Gordon Elliott. 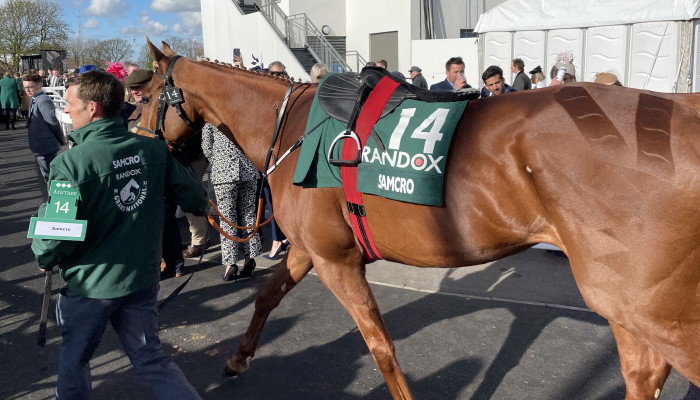 Known for being one of the most talked about horses in training at one point and one of the highest regarded prospects before he ran under rules, there has certainly been a lot of talk surrounding Samcro over the years.

It seems incredible to say this, but he’s perhaps disappointed a little over the years, despite winning two Grade One races at the Cheltenham Festival and another Grade One in Ireland. But Samcro foaled back in 2012, probably has disappointed, if the talk was to be believed before he hit the track.

Trained by Gordon Elliott and owned by the Gigginstown Stud for his full life under rules, he’s been in and around some of the best races and horses for many years, and also one that has previously attempted to win the Grand National.

Over the past few decades, it’s hard to remember a horse hyped up so much before hitting the track under rules as Samcro was. He ran in one point-to-point race, where he was sent off as the 2/5 favourite for his debut, coming home to win that race by a length.

He was immediately sent to Gordon Elliott after that, and the talking began. Many people believed that Samcro could go all the way to the top, and he was spoken about as a future Gold Cup winner before he’d even jumped a hurdle.

He went through his time running in national hunt flat races unbeaten, which further added to the hype, even though he’d not really been tested. Then, when he went over hurdles, the hype continued and was in overdrive when he won at the Cheltenham Festival in March 2018.

The horse was successful in the Ballymore Novices’ Hurdle over 2m5f, at this point, he was a perfect eight from eight, one point to point, three flat races and four over hurdles, including two Grade One events. But he fell in his next outing, and the Samcro bubble began to burst.

The following season saw him run three times, losing them all, and after that, when chasing, he won on debut but then fell and finished second in two Grade One’s. He showed that he could be beaten, though his second Cheltenham Festival Grade One came next to reignite the hype.

Things settled down after that, but there is no doubt that in recent years, Samcro will go down as being one of the most talked about point-to-point horses, who was spoken so highly of before he’d even hit the track. The hype train went on and was deserved to a certain extent, but calling the horse a future Gold Cup winner, before even jumping a hurdle in public, proved to be a little far-fetched.

While there was a lot of talk around Samcro and what he was going to do in the future, let’s not take away his achievements on the track, which were seen in great style at the Cheltenham Festival.

As mentioned already, he won twice at the festival, from three appearances, and was pulled up in the other. His first win was in the 2018 Ballymore Novices’ Hurdle. At this moment, he was unbeaten in all races, and the hype train was ramped up to the max. He won nicely this day, by almost three lengths, beating a very strong field, and showing his ability to stay, stepped up to 2m5f on a stiff track.

His second Cheltenham Festival win came after some troubles, people were starting to write off Samcro to a certain extent, and the belief was that he wasn’t the horse many expected him to be. However, he bounced back in style and dug in deep to land the 2020 Marsh Novices’ Chase by a nose from Melon. This was a terrific race, and once again made people believe in Samcro’s ability, even if it wasn’t as strong as they had done before.

He would return to the festival in 2021 to run in the Ryanair Chase but was pulled up on this occasion.

While there was a huge amount of talk around Samcro in the early years, don’t let that take away from what he did on the track. His point-to-point victory was expected and should probably have been by a wider margin, but he got the job done.

In national hunt flat races, he was getting better with every run. He won his debut by nine and a half lengths and followed that up with a win in listed company by half a length, both at very short odds. His best flat run came next when he won at the Punchestown Festival in April 2017, winning by 17 lengths, and at this moment, he was already receiving short quotes to win races at the Cheltenham Festival the following season.

He ran four times in novice races over hurdles, winning them all, including twice at Grade One level and once at Grade Three level. Then he fell when going up to open company at the 2018 Punchestown Festival, and this is seen as the moment when his career began to go in a different direction, the feeling was that the horse took a long time to recover from that.

As mentioned, Samcro won the Ballymore Novices’ Hurdle at the Cheltenham Festival and the Marsh Novice Chase at the same meeting a couple of years later. These two were two of the three Grade One contests he won during his career, the third was another novice hurdle race.

This was the Deloitte Novice Hurdle at Leopardstown, a race that takes place in February and traditionally attracts the very best novice hurdlers in Ireland ahead of them going to the Cheltenham Festival. He won this contest by five and a half lengths, was odds on to do so, and cemented his place as the big Irish novice hurdle fancy for the Cheltenham Festival a month later.