The horse Aldaniti ran in the Grand National twice, winning once and falling at the first fence when heading back to defend his crown. Despite his relatively short time with the race, there is no doubt that he created one of the best feel-good stories of the race, both down to his own determination and comeback and that of his jockey, Bob Champion.

When right at the top of his game, Aldaniti suffered a severe leg injury, which would keep him off the track for more than a year. He was nursed back, with a clear target of the Grand National in mind, though there was a big question mark over whether he would return good enough to win a race of that nature.

Foaled in 1970, a horse that placed in both the Cheltenham Gold Cup and the Scottish Grand National prior to his injury, this horse had a huge heart. He did come back, an achievement in itself, and not only that, but he went on to land a big one, the Grand National, a race where he came home to rapturous applause because of the story he had created.

If you want an indication of how many people wanted this horse to win and what he had achieved, you get that from the celebrations a day after the Grand National win when he returned to the Josh Gifford stables. More than 3000 members of the public were in attendance to welcome him home that day, such was the size of his fanbase because of the troubles he had faced with injuries.

Winner Of The 1981 Grand National

Before getting into the backstory around the Grand National of 1981, which includes both Aldaniti and jockey Bob Champion, it is important to recognise the race itself and the fact that Aldaniti was excellent throughout.

Thirty-nine runners went to post, with just 12 of those finishing. After a win in the Whitbread Trial Chase, Aldaniti was well-fancied by many punters. Couple that with the money on him to win because of his story and his jockey, and there was a stream of people looking to back him for glory. That all resulted in the horse being second favourite behind Spartan Missile, with an SP of 10/1 for those who had faith in Aldaniti.

Halfway around the first circuit, when the field had lessened a little, Bob Champion decided it was time to take his mount to the front. This was a crucial move for the horse and really allowed him to find his rhythm over the big Aintree fences. It was also a move that won the race because, from this point onwards, Aldaniti was not passed by any other runner, he led from this point to the winning line. 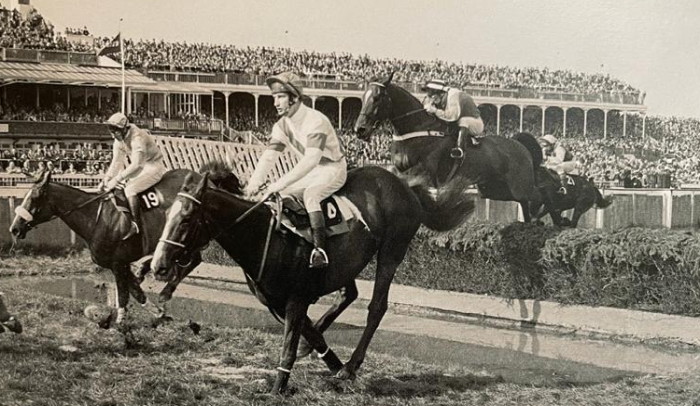 Spartan Missile was able to get close and looked to be the main challenger on the home straight. However, Champion kept finding more on his mount, and although it did get close at one point, the winning distance when they crossed the line was four lengths, a relatively comfortable success in the end.

This was the first time that Aldaniti had run in the Grand National, and given the injury, he had prior to the race, time was running out for him to get a big win on the board. At 11, he would gain that big win, with the biggest race on the calendar going his way. A year later, Aldaniti would be back for more, but this time things did not go to plan at all.

The horse returned with Bob Champion on board again, but at the very first fence in 1982, the pair would depart the race due to a fall. This was the final time he would run in the Grand National, but despite just two runs, one not getting past the first fence, the story behind this horse will ensure he has a place in the Grand National history books.

Remarkable Fight Back After Injury

The victory of Aldaniti was well celebrated on the day by connections and punters, while there was also an excellent turnout for him when he arrived back at the Gifford yard a day later, with more than 3000 people down there to watch him step off the horse box. However, the reason for all of this love for the horse is down to what happened in the time before the Grand National.

When a bad injury struck, the horse was in his prime as a nine-year-old. At the time, Aldaniti had finished third in the Cheltenham Gold Cup, and he was also showing his staying credentials too, with a second in the Scottish Grand National. He looked like the type of horse who could challenge at Aintree, but then injury struck and kept him off the track just when he didn’t need it.

The leg injury he picked up was bad, so much so that it would keep him off the track for more than a year. This was an imperative time because he was now an eleven-year-old, and time was not on his side. However, Josh Gifford remained optimistic and set the goal of running in the Grand National of 1981.

Many questioned if he had the talent to do so after such a bad injury, but those questions were brushed away in part thanks to a great win in the Whitbread Trial Chase at Ascot in February, a race that would put the horse spot on for Aintree. This was a big win, one that showed there was still something there and that the horse could compete at the highest level.

As they say, the rest is history, Aldaniti made it to Aintree, and not only that, but he came out on top in the big one to land a very emotional win. Just getting the horse to Aintree on the day is enough to give Gifford a huge amount of credit after nursing his runner back, but to go and win it, well, that’s just a special achievement from the trainer.

Despite his advancing years, the horse showed great determination to come home in front, as well as showing that he still had a huge amount of quality. For that reason, he will certainly go down as being one of the most popular Grand National winners of all time and one that will remain long in the memory of many people.

We can’t go through the story of Aldaniti without mentioning his jockey on Grand National day, Bob Champion. If you thought the horse had battled during his career and come out on top after struggles, then what Champion went through in his career certainly goes above and beyond that.

In 1979, Bob Champion was diagnosed with testicular cancer, which required long treatment, a lot of time in the hospital, and real strength of character to bounce back. First of all, Champion beat cancer, a massive achievement in itself, then secondly he was able to return to the sport of horse racing, one that he loved, another huge win.

But the biggest win of all came in the 1981 Grand National, when he rode a winner on the biggest stage of them all, coming back in style to smash the Grand National, much to the delight of everyone involved in racing. We’ve not seen many more popular winners than Aldaniti, partly because of the horse but also because of his jockey, a much-loved rider, who had gone through so much to get riding again.

Thanks to his connection with Champion, the story of Aldaniti is one of the most accessible when compared to other Grand National winners in the same era. A book and film were made, showing the struggles that Champion faced after his diagnosis and what he went through to get back in the saddle.

Of course, both culminate with the Grand National win by Aldaniti and the aftermath that followed the big win, giving an insight into how much love there was for both horse and jockey at the time. The pair were recognised later in the year when they won the Sports Personality of the Year Team Award for winning the Grand National together.

The Grand National was certainly the biggest win of Aldaniti’s career, with nothing else coming remotely close to that day. His other big win was the Whitbread Trial Chase victory at Ascot, which came in the build-up to the Grand National and really put him spot on for the race.

Prior to his leg injury, the horse was close to the top of the game, but that was not thanks to victories, instead, it was thanks to a couple of strong placed efforts in big races. A third in the Cheltenham Gold Cup was followed by a second-placed finish in the Scottish Grand National. These weren’t wins, but certainly, put him on the right track.

Standing tall above everything else though, after facing such huge adversity, was Aldaniti’s Grand National win, the biggest of his career, and a massive day of celebrations for all those involved with both horse and jockey.