The 1982 Grand National was one where we saw jockeys make history, firstly the winner, and then secondly, another jockey who completed. Amateur rider Dick Saunders was the man on board winner Grittar, and by winning the race aged 48, he became the oldest rider to win the Grand National.

It was also a big day for female jockeys and the start of a real association with the race for them. Geraldine Rees rode Cheers in the contest, they finished last of the eight who managed to get around, but despite coming last, she made history on the day. She was the first female rider to complete the Aintree Grand National, paving the way for women of the future to play a bigger part, both in the race and in the sport as a whole.

Grittar won the contest and was well supported beforehand, returning the 7/1 favourite. Just eight runners from a starting field of 39 completed the race, mainly due to an incident at the first fence, in which many of the runners fell. Not only did he win the contest, but he won the race in the style of a very good horse and was really impressive on the day.

What Happened In The 1982 Grand National?

Heading into the 1982 Grand National, Grittar was in excellent form, both during the season and in the previous campaign, where he really impressed. He looked every inch the type of horse who would be able to win a Grand National.

In 1981, he completed the Cheltenham and Aintree Foxhunters Chase double, which stood him perfectly for the Grand National test, as the Aintree race used the same Grand National fences. His campaign in 1982 was all about Aintree and getting there in top shape.

His Grand National preparation began with a great win at Leicester, the quality of the race was low, but there was no doubt that he really impressed that day. He then went on to finish a credible 6th in the Cheltenham Gold Cup, a step too far, but it kept him in top shape, ahead of Aintree.

The race itself took a very different look after the first fence. There was no big pile-up, but many runners had individual falls away from each other. Ten runners fell at that fence, including fancied horses such as Three To One and Aldanti, who were both sent off at 12/1. 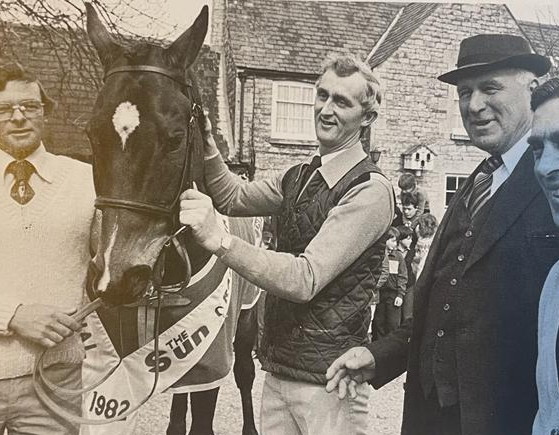 A further ten were out of the race by the eighth fence, so the field had dropped by more than 50% in just eight fences. Grittar had managed to avoid the trouble, in a good position and going well.

To be honest, even if every horse had stayed on their feet, with the way that Grittar won on the day, it is likely that nothing would have caught him. There was a big gap back to the rest, Grittar was well clear going into the final furlong of the race, and not only that, but he was going far better than those in behind. He eventually recorded a winning distance of 15 lengths, he looked like a fresh horse on the run-in, and really stamped his authority on the field.

There was some talk before the race about who would ride the horse. Dick Saunders had told trainer Frank Gilman that he should employ a professional jockey to take the ride, with the race being so big, but Gilman refused and put Saunders on board without hesitation.

The public didn’t seem bothered that Saunders was 48 and that he was an amateur, as the money came for Grittar, he was sent off as favourite at 7/1. This was the only time that Saunders rode in the Grand National, one visit to the race, one ride and one win.

Trainer Frank Gilman was having his second runner in the race, but the first was a long time before this. He trained Another Rake for the race in 1955, who fell at the first fence. Grittar would be his second winner, first and only winner, and in the future, Grittar would run twice again, being the only further runners for Gilman in the race.

Grittar took home the race in grand style in 1982, a quick glance may see a lot of fallers and a field that disappeared during the contest, but don’t let that take anything away from his performance. He was excellent, won with ease, and looked as though he could’ve gone round the track again.

Dick Saunders made history when winning the Grand National in 1982. He did so because of his age, at 48 years old, he became the oldest winner of the Grand National, and since the race, no one has been able to beat him with that, his name still stands in the record books today.

The feat was made even better by the fact that he was an amateur rider with another job to handle and without the constant daily training and race riding that professional jockeys had on their side.

There was talk in the build-up to the race that Saunders had told trainer Frank Gilman to employ a professional, as they would be able to do a better job than him. But Gilman didn’t change his ways, he wanted Saunders on board, and in the end, his decision was fully justified.

Given the toughness of the national hunt game and the toll it takes on jockeys with injuries from falls, it would be no surprise to see Saunders keep this record forever.

To round off the story about Dick Saunders, he got to do what many sports people want to do, and that is retire at the top of the game. He won the Grand National, and then decided to retire from the sport, which was coming due to his age, but the win gave him the perfect moment to do that.

He didn’t walk away from the Grand National, though, because after retiring he became the chairman of the stewards at Aintree racecourse, so he would continue to be involved in the Grand National at a high level.

A Big Day For Female Riders

The winning jockey took most of the praise when it came to the riders, winning the National at such as old age, but there was another storyline a little further down the field that also deserves some recognition.

Geraldine Rees is the jockey in question, and she came eighth in the race on board a 66/1 shot Cheers. She was the last runner to finish, but it wasn’t her position that mattered on the day, the fact was that she finished.

By doing this, she became the first woman jockey to finish the Grand National, those before her had never completed the course. At the time, things were hard for female jockeys in the sport, struggling to get rides in any races, never mind big contests such as the Grand National. However, thanks to Rees, a woman was down as completing the race, showing it could be done, and no doubt paving the way for future women to get involved with the sport and pick up rides in the race.