The 1989 Grand National was won by Little Polveir, his first win in the race at his fourth and final attempt in the contest. Trained by Toby Balding and ridden by Jimmy Frost, the 28/1 shot went on to win the contest by seven lengths.

We saw heavy ground on the day, with a winning time of just over 10 minutes, showing just how difficult the race was on the day. Little Polveir was a 12-year-old when he won the contest, coming to the end of his career, but he had more than enough in the locker to get the job done.

In a dramatic build-up to the race, Little Polveir was actually sold a few weeks before, with Edward Harvey buying the horse from a group of four people in the hope of getting a National chance from him. That certainly paid off in the end, with Harvey owning a Grand National winner just weeks after purchasing him.

What Happened In The 1989 Grand National? 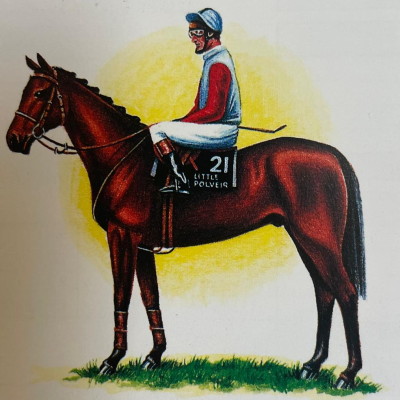 We had a lively betting heat before the 1989 Grand National, and there was huge money for one of the runners involved, so much so that he went from outsider to favourite. Dixton House was the horse in question, he won the National Hunt handicap chase at the Cheltenham Festival just a few weeks before the Grand National.

Prior to that run, he was 33/1 to win the National. On race day, he was sent off as the 7/1 favourite for the contest, with a lot of public money following him after a great Cheltenham win. Unfortunately, things didn’t go as planned as at the front at Becher’s on the first circuit, where the horse fell and was out of the race.

Bonanza Boy had been the real talking horse for many months before, until the Cheltenham Festival. When we saw Dixton House impress and shoot to the front of the market, Bonanza Boy had a very average run in the Cheltenham Gold Cup to cool his chances. Prior to that, though, he’d done everything right, as he had won the Welsh Grand National and the Racing Post Chase, two key races that are seen as great pointers towards the Grand National.

The ground on the day was described as heavy, which made this a tougher test than normal, but there were no staying issues for Little Polveir, who had previously won the 1987 Scottish Grand National over four miles, so had no doubts.

He had finished 10th in the 1987 Grand National and fell in both of his other starts. This was his last chance in the race, as he was now 12. Jimmy Frost was on board, having his first ride in the Grand National, and he had his horse in the perfect positions all the way.

Up with the pace early, when the horses jumped the water jump at the end of the first circuit, Frost moved his mount into the lead and kicked a little clear of his rivals. That was at the end of just one circuit, but in many ways was a race-winning move, as the pair were never headed after that point.

Smart Tar was the closest in behind, but at fence 21, he fell, leaving Little Polveir three lengths clear. His lead over the second horse was never any shorter than that from this point until the end of the race, showing just what a dominant performance this was by the horse.

Being in the right place in the contest certainly helped, he was given a great ride, and more importantly, he loved the underfoot conditions, which were not ideal for some of the others.

Of the 40 runners that took part in the race, just 14 finished the contest. There was a lot of talk afterwards about Becher’s Brook and the safety of that fence, as calls for the Grand National to be altered became much louder from those in the media. This would be the last time we saw Becher’s in its old state. Before the 1990 race, the fence was modified, as was the bend that comes straight after the jump.

Little Polveir Wins At The Fourth Time Of Asking

Getting to the Grand National and running in the race four times is an achievement in itself, and this is what Little Polveir did by running in the 1990 race. The win was simply the cherry on top and one that was well deserved.

As a 12-year-old, this was always going to be his final run in the contest, and he certainly went out in style.

In terms of his other runs in the race, he finished 9th in 1986 before unseating his rider in both 1987 and 1988. However, what did change during these runs was both his trainer and jockey. In 1989, it was the first time that Toby Balding had trained the horse for the race and also the first time that Jimmy Frost had ridden him in the race.

While there is a lot of talk and attention put on the horse, trainer and jockey, in the story of Little Polveir, we also need to put some focus on the owner. Edward Harvey clearly had a lot of faith in the horse and must have thought he would run well in the race.

He bought the runner just six weeks before the Grand National. As a 12-year-old, he clearly didn’t have much running left in him, so he was buying him with the race specifically in mind and little else. Four people owned the horse in partnership prior to Harvey buying him off them, and while they had some great days with him over the years, they will forever be the people who sold a Grand National winner in the lead-up to the race.

A stroke of luck, maybe, but credit to Edward Harvey for taking a risk, buying a horse, aiming him at a big prize and being rewarded with the win.