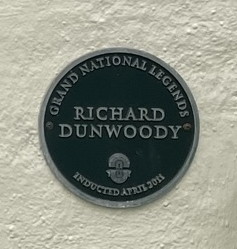 There won’t be too many jockeys out there that have a better Grand National record than Richard Dunwoody. A rider across the 80s and 90s, Dunwoody excelled in racing, winning many of the big races, as well as being a champion jockey on three occasions.

As far as the Grand National goes, Dunwoody won the race twice, though he was also placed on multiple occasions. Born on January 18, 1964, Dunwoody held the record for the most winners in UK national hunt racing until Tony McCoy passed his total of 1874 winners in 2002.

Overall in the Grand National, Dunwoody had 15 rides in the race throughout his career. He won the race twice and placed a further six times, meaning that he was in the first four home on eight occasions from 15 rides, more than 50%. Some jockeys would give anything to have completed the race more than 50% of the time they entered.

Nine completions from 15 was another strong number, and one of the times he didn’t complete was in the 1993 race that never was, which doesn’t really count.

An incredible jockey with an excellent Grand National overall record, including being a dual winner.

The 1986 Grand National was home to Richard Dunwoody’s first victory in the race, winning it on board West Tip for trainer Michael Oliver. This was definitely somewhat of a redemption bid for both Dunwoody and West Tip, who were deemed incredibly unlucky 12 months prior in the race.

In 1985, Dunwoody was having his first Grand National ride, West Tip was in the race for the first time, and things were going great for the pair. That changed at Becher’s Brook, fence 22 on the second circuit when they fell. At the time of that fall, they were disputing the lead, going very strongly, and although it is impossible to predict what would have happened next, many felt they were in with a great chance of winning.

In 1986, there was no mistake, and the pair got their reward for coming back and having another crack. There was some talk around Dunwoody not being able to take the ride, but this was all cleared up well in advance of the race, much to the jockey’s delight. He was retained to ride Port Askaig but was given permission to leave that horse and find another mount, which was him reuniting with West Tip.

Again, the pair looked to be going strongly in the opening part of the race, and when the race came down to the final two fences, a group of eight were in contention, but no one was going better than West Tip, who had been moving stylishly through the field at this point.

After jumping the final fence, West Tip moved alongside big outsider Young Driver and went past him with relative ease. He went on to win the race, and while things were pretty comfortable on the whole, the winning distance was recorded as just two lengths, which doesn’t really tell the whole story of the race.

West Tip would go on to be one of the most remarkable Grand National stories. He didn’t manage to win the race again in his career but would run in it an incredible six times in six years, with Dunwoody on board for five of them, missing just the last.

During those runs, he placed on four occasions and only failed to finish on his first start, the one where he was travelling brilliantly and a race that many believe he would have won. 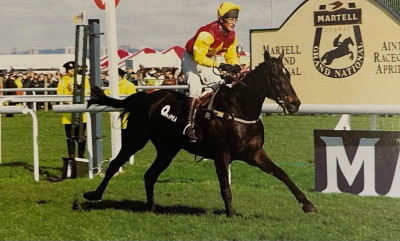 Dunwoody’s second Grand National victory came in 1994 aboard the Martin Pipe-trained Miinnehoma. Conditions were incredibly tough here, and at the end of the race, Dunwoody deserves a lot of credit for powering his horse home, keeping him going, and winning the contest. With Just So in behind and looking to catch up, Dunwoody kept working hard on Miinnehoma to get him home.

The ground for the race was heavy, and just six horses completed the course, giving you an idea of how tough it was. There was a big gap back to third, but just one and a quarter length separated the front two. It was a slow motion finish, but Dunwoody did enough to keep his mount in front and land what would be his second Grand National win as a jockey.

The victory came for trainer Martin Pipe, who Dunwoody was a stable jockey to at the time. The Pipe yard had five runners in the race, with Dunwoody getting to choose which he rode alongside his trainer, and luckily the pair got things right. It was a big win for the team at the time, the Grand National was highlighted as a race that the trainer was desperate to win, and kept firing multiple runners at it, eventually, Miinnehoma was the one to do the job and win the title for them.

The Trust In Richard Dunwoody

When you ask trainers about Richard Dunwoody, many will tell you they used him so much because they could trust him to be good on their horses. His Grand National rides over the years seem to show that, too, given how many times he rode the same horse in the race.

He started by riding West Tip five times in the contest and was always trusted to get back on board. Miinnehoma was a horse he rode twice, and he also rode Big Sun twice in the race. Trainers also trusted him with other mounts they had too.

From his 15 attempts at the race, he rode just nine different horses in total. When it comes to trainers, he rode for just six different trainers over the years too. When people had Richard Dunwoody and knew he was available to ride for them, they didn’t want to let go and ensured he was on all of their big horses where possible.