The 2001 Grand National will be widely remembered for many reasons. The foot and mouth outbreak threatened the race and forced the abandonment of the Cheltenham Festival just a month earlier.

There was also the fact that just four of the 40 runners finished the race, and two of those were remounted to finish after falling. Don’t let that overshadow the feat of Richard Guest, either. He officially rode the winner, Red Marauder, and unofficially trained it to victory, with a license held by winning owner Norman Mason.

What Happened In The 2001 Grand National? 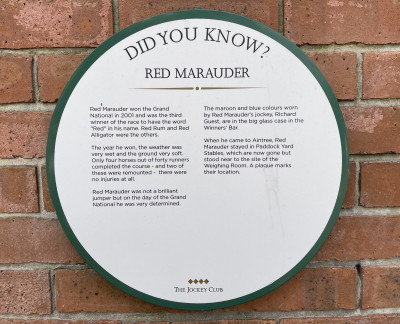 A winning time of over 11 minutes will tell you all you need to know about the going on the day, which was officially described as heavy on the day. This was the slowest time recorded for the winner in over 100 years.

The race will be long talked about due to the number of runners finishing. Many fallers, plus the tough going, both accounted for that, just four crossed the finishing line, and only two of those got round unscathed. The other two were both remounted after errors to complete.

Red Marauder was the winner, taking the race at 33/1 to win by what is described as ‘a distance’. Following him home was Smarty, ridden by Timmy Murphy and these two were the only two runners to get around cleanly. Both Tony McCoy and Ruby Walsh decided to remount their runners when they noticed just two were left in the field, they did so and came home to finish third and fourth. You have to go back to 1980 to find the last time only four runners finished the race.

In terms of the contest itself, this wasn’t a very good one. Smarty led for some time, but at the second last he began to tire with Red Marauder coming upside him and ultimately pulling clear. Smarty continued and jumped over the last two fences to come home in second place, well ahead of the two remounted runners.

The SP of the winner was 33/1, while Smart was second at 16/1, Blowing Wind was the same price in third and Papillon was 14/1 in fourth. Edmond, Moral Support and Inis Cara were all sent off the 10/1 co-favourites, and all failed to finish.

When you look at the official records, they will say Richard Guest rode the winner, and the trainer was Norman Mason, who also owned the horse. However, Guest was the man that also trained this horse in County Durham.

He played a full part in not only riding the winner, but also training him to the moment, ensuring he was in the best possible shape on the day, and the horse clearly enjoyed going round in the tough conditions.

The foot and mouth outbreak in the UK led to the abandonment of the Cheltenham Festival, just a month before the Grand National and there was talk that the big Aintree meeting would also be subject to the same.

However, a lot of hard work, extra checks and cleaning, and more visibility from vets and others around the stable area was enough for the race and full meeting to go ahead.

Aintree Criticised For Running In Conditions

The race was not without its critics, with the main issue being the conditions that the race was run in. Those defending the course will state that 30 of the 40 runners fell or were brought down, which was a high number, but not due to the ground.

However, the ground certainly made some struggle and played its part on the day. Thankfully, all horses and jockeys were reported to be fine after the race, with no major injuries