A winning Grand National gamble came in 2003, a race that will stick in the memory of many older punters for that exact reason. The horse in question was Monty’s Pass, who won the race at 16/1, but that only tells part of his story, one that involved a big morning gamble after the horse was tipped up to win the race in many parts of the media.

Monty’s Pass was ridden by Barry Geraghty and trained by Irish handler Jimmy Mangan. After the race, Geraghty praised his mount for the jumping he had shown throughout the race, claiming his foot-perfect performance was the main reason he won the race.

What Happened In The 2003 Grand National?

The ground on the day was described as good, and that was backed up by a time of 9 minutes and 21 seconds. 40 runners went to post, with just one change the day before, Kingsmark was withdrawn and replaced by Bramblehill Duke.

Shotgun Willy was sent off as the 7/1 favourite for the race, with Iris Bleu and Youllneverwalkalone at 8/1 and Ad Hoc rounding off the runners priced at single figures with an SP of 9/1. None of those four managed to complete the race, for punters following those at the top of the market.

With two fences to jump, four horses were in contention, though as the race drew to a close, there was only going to be one winner. Supreme Glory, eventually second, was the horse who looked like having a chance of winning, but the winner Monty’s Pass was by far the strongest stayer on the run in and kicked clear again at the elbow. That led to a wide margin success of 12 lengths, with Supreme Glory back in second and a further two lengths to Amberleigh House in third.

2002 winner Bindaree stayed on to finish sixth in the race, a disappointing run considering he won the race a year earlier, but a good showing when you see he was stuck out at the back for most of this contest and made a couple of jumping errors.

14 runners finished the contest, in what turned out to be a rough race. One horse died at the course, Goguenard, while others were injured and four jockeys also required treatment for broken bones.

Anyone who was part of this gamble will certainly remember the day. Monty’s Pass won at 16/1 but that doesn’t tell the whole story of what unfolded along the way. Originally, the horse was 40/1 on the morning of the race but was tipped up in many newspapers and that of course drew attention to his chances.

Those even shrewder were on when Pricewise in the Racing Post tipped him up, two months before the race. Money mounted, and that led to a cut in price, with the horse eventually going off at 16/1, still big considering the amount of interest in the horse, mainly thanks to newspaper tipsters.

After the contest, William Hill claimed the race was their worst hit in Grand National history, with two bets alone forcing them to pay out £400,000. 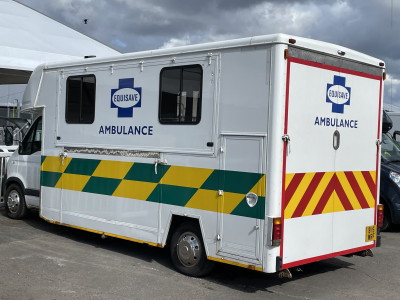 A Tough Race For Horses And Jockeys

Jockeys and trainers will certainly not look back on this contest with too much fondness. As for jockeys, Gerry Supple broke his leg, Alan Dempsey broke his wrist, Brian Crowley broke his collarbone and Timmy Murphy broke his nose and had concussion symptoms.

Goguenard was euthanised on track, Youllneverwalkalone retired with a broken leg and various other horses were pulled up and found to be lame. The Grand National is always a tough test, and 2003 reminded us of that.