One of the bigger named jockeys in the early 2000s, Mick Fitzgerald, is a man that has had success at the highest level. His Grand National success came earlier in his career, back in 1996, at just his second attempt in the race.

Fitzgerald, born on May 10, 1970, rode Rough Quest to success in the National, though away from this win, it is fair to say that it wasn’t really his race. He had a total of 13 rides in the Grand National but only managed to complete twice, winning on Rough Quest in 1996 and finishing 9th on Kingsmark in 2004.

During the most successful part of his career, Irish rider Fitzgerald formed a great partnership with Nicky Henderson that would bring success for them both on the biggest stage. That included 14 Cheltenham Festival wins, amongst other big race, wins, both in the UK and across in his native Ireland. 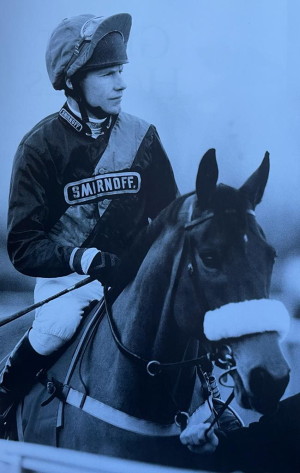 Terry Casey was the trainer of Rough Quest and had him in the perfect shape for the contest before trusting Fitzgerald to take the mount. He had previously won the Racing Post Chase and finished second in the Cheltenham Gold Cup, so he was perfectly primed for the day. Due to this form, Fitzgerald had the weight of being favourite on his shoulders, as well as being a relative newcomer to the race and racing at the top level.

That didn’t stop the pair, though, they ran out winners by one and a quarter lengths. As they jumped the last, Fitzgerald had Rough Quest in second place but always looked as though he had enough left to go past rival Encore Un Peu, and he did just that up the run in, going past and holding on to take the race. These two were miles clear of the rest, the third was Superior Finish, who was a further 16 lengths back.

The big drama in 1996 came after the race when a stewards enquiry took place due to interference. Rough Quest came across the second placed Encore Un Peu on the run-in, causing interference, and given the size of the race and what was at stake for all involved, this was a big enquiry that needed to be dealt with correctly.

The pictures show that David Bridgewater, jockey of Encore Un Peu, had to hold his mount back on the run in to prevent colliding with Rough Quest, who went across him. However, what it also showed was the fact that Rough Quest was finishing the fastest, and looked the stronger horse, so would have still been able to stay clear of the second, even if the second hadn’t been stopped.

The eventual outcome was that the places remained unaltered, and Rough Quest, Terry Casey and Mick Fitzgerald were able to keep the victory. There was a lot of talk after the race suggesting that the outcome was only as it was because of the size of the race and that the stewards didn’t want to be seen as deciding the outcome of such a big event afterwards, rather than based on the result of the race.

Fitzgerald may have been lucky to keep the win in 96, but elsewhere in the race, he had very little luck. He completed the course just once more during his career, with multiple falls, unseats and horses that could not get home along the way. Despite being on some fancied rides over the years, the win on Rough Quest in 1996 is his only Grand National success.

Where many people will remember Mick Fitzgerald as riding horses trained by Nicky Henderson. After impressing Henderson by riding for the yard regularly, the Lambourn-based trainer eventually gave Fitzgerald the title of being his retained rider.

This came in the early 2000s and lasted until Fitzgerald retired from riding in what would be a fruitful partnership for them both. The biggest two years of Fitzgerald’s career came in 1999 and 2000 when he was crowned the top jockey at the Cheltenham Festival in back to back years.

He won the Gold Cup in 1999 for Paul Nicholls on See More Business while also winning the Champion Chase in the same year aboard Call Equiname. A year later, in 2000, he won the Stayers Hurdle on Bacchanal and won the Arkle on Tiutchev, amongst others.

At a time when Paul Nicholls was beginning to sit at the top of the racing ladder, Fitzgerald was riding for him while also being on horses trained by Henderson, an up and coming trainer at the time. Both clicked at the right time for Fitzgerald, who was given a number of very good horses to ride thanks to these partnerships.

Career Cut Short Due To Injury

Unfortunately, towards the end of his career, we never really saw the best of Mick Fitzgerald ever again. Injuries really hampered his ability to keep in the saddle, forcing him to have time away from racing and eventually being the reason he retired.

In 2005, Fitzgerald was on the verge of retirement but managed to come back from injury and came back with a big race success in the Hennessy Gold Cup at his local course Newbury, onboard Trabolgan for Henderson. The horse was seen as one of the reasons why Fitzgerald worked so hard to get back to race riding because he was excited by his talent.

In the Spring of 2007, Fitzgerald was once again close to retirement, with the offer to work in sporting hospitality. However, at the end of that season, the pair had so much success that Fitzgerald found it impossible to leave the sport and decided to keep going.

Unfortunately, a year later, he was left with no option, and it was the Grand National that left him with that. In the 2008 Grand National, Fitzgerald suffered a fall from L’Ami, at just the second fence in the race. He suffered spinal injuries here for the second time in his career. Unfortunately, he was told by doctors that he would be unable to ride in races again as if he returned and fell, there was a serious threat of paralysis.

On August 7, 2008, due to injuries and age 38, Mick Fitzgerald retired as a jockey. He won the Grand National back in 1996, had terrible luck in the race after that, and ultimately, it was a Grand National fall that would be the final straw and end his racing career.

Despite being cut short, success for Fitzgerald was there for all to see. A Grand National win, Cheltenham Gold Cup win, twice named as the top jockey at the Cheltenham Festival, and more than 1300 winners to his name overall, Fitzgerald was excellent and, with a bit more luck, would have no doubt increased his status within racing even further.